SOUTH SALT LAKE — A 20-year-old Taylorsville man who police say stole a patrol car and crashed into two other vehicles was booked into the Salt Lake County Jail on Monday.

Ryan Troy Cooke is accused of taking a South Salt Lake police car about 3 a.m. Sunday from Flying J, 2100 S. 900 West, just as the officer was about to get into the vehicle. The officer unlocked the door from a remote device he carried with him.

As soon as that happened, Cooke got into the vehicle and drove off, South Salt Lake police detective Gary Keller said. The keys were in the ignition. 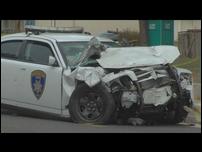 Keller said he could not comment Monday on whether it's policy for South Salt Lake officers to keep their keys in the ignition, though he noted that all policies were being reviewed because of the incident.

Just minutes after taking the car, Cooke allegedly smashed into the back of a vehicle stopped at a red light at 3300 South and 500 East, sending the vehicle into a tree.

Eric Peterson and an 18-year-old woman, both from Nevada, were injured. Peterson is in very critical condition, while the woman was released from the hospital Monday, Keller said.

Darcy Casady, 52, was hit in a third vehicle while going through the intersection and was stable condition Monday. Officials say she may be released from the hospital Tuesday.

The crash has sparked three investigations: one by South Salt Lake police into the stolen police car and internal policies, one by Salt Lake City police into the accident, and one by the Utah Highway Patrol into possible impairment.