Controversial judge will not be disciplined, Utah Supreme Court decides

The Judicial Conduct Commission issued the order in connection with a $10,000 warrant the judge issued for a woman who had committed a traffic violation. The commission believed it was issued as a punishment because the woman had been rude to his clerks.

A clerk who issued the warrant called it "overkill" and believed Stoney wanted to "make a point," according to court documents.

But Stoney called it a mistake, saying he did not remember issuing the warrant and most likely meant to issue a $100 warrant. The Utah Supreme Court sided with Stoney in a ruling issued Friday. "Judge Stoney's conduct does not rise to the level of a violation," the justices wrote.

"Judge Stoney’s testimony that the amount of the warrant was an unintentional error does not conflict with the record," Justice Ronald Nehring wrote. "The facts do not suggest that Judge Stoney issued a $10,000 warrant in response to Ms. (Barbara) Acord’s rude remarks to the clerks. A preponderance of evidence therefore does not support the commission’s case against Judge Stoney."

Judge Stoney's testimony that the amount of the warrant was an unintentional error does not conflict with the record. The facts do not suggest that Judge Stoney issued a $10,000 warrant in response to Ms. (Barbara) Acord's rude remarks to the clerks. A preponderance of evidence therefore does not support the commission's case against Judge Stoney.

The court sent the woman a delinquent note in June 2010, prompting her to call Stoney's clerks on July 6 and ask to see the judge. According to court documents, "Ms. Acord was rude to the clerks she spoke with on the phone, yelling at them and accusing them of 'twiddling their thumbs' while her tax dollars paid their salaries." A hearing was set for the same day, Aug. 4. The woman's behavior was recorded and then a docket entry stated that the case was submitted to Stoney for review and that he had issued a $10,000 warrant.

The judge said he most likely meant to issue a $100 warrant and misplaced his punctuation or added an additional zero. He reiterated to the justices that he rarely issues such a high warrant and that he didn't know of the woman's alleged conduct to the clerks until she came to a hearing in August.

The high court said the Judicial Conduct Commission had not proven that Stoney violated the code of judicial conduct. 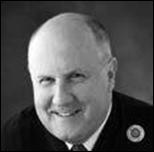 Controversial judge will retire, complaints will be dismissed

Stoney will retire from the bench and seek no future judicial appointments. Stoney, who presides over justice courts in Saratoga Springs and West Valley City, did not respond to a request for comment.

The judge was also embroiled in controversy for throwing a Saratoga Springs woman in jail for 24 hours in August 2010 after she had her cellphone out in his courtroom. Fourth District Judge Claudia Laycock said Stoney's actions violated Elaine Damron-Peletekian's due process rights.

"Judge Stoney's error was egregious and its consequences were severe," Laycock wrote.

Damron-Peltekian's complaint was pending when an agreement was reached between Stoney and the Judicial Conduct Commission. Stoney will retire on Dec. 31 and investigations into any pending complaints — the agreement only states that there are one or more — will be suspended. It is anticipated they will be dismissed after his retirement.

Stoney currently sits on the justice court bench in both Saratoga Springs and West Valley City. Vacancies left by his retirement were recently announced and those seeking to fill his post have until Oct. 17 and Oct. 15, respectively, to submit their applications. Applications are available on the Utah State Courts website. Those with additional information can contact Markette Schwartz at MSchwartz@saratogaspringscity.com or at (801) 766-9793, ext. 121.