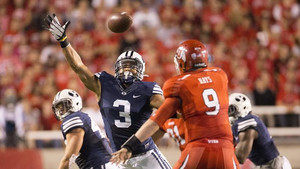 Though the Cougars fell in a 24-21 heartbreaker to in-state rival Utah, Van Noy made an impact on the defensive side of the ball. The junior from Reno, Nev., totaled eight tackles, 4.5 tackles for loss, 1.5 sacks, forced a fumble and had one pass breakup against the Utes.

Van Noy is tied for No. 4 nationally with 4.5 sacks in 2012 and No. 6 nationally in tackles for loss with 7.5 on the year. This season the 6-foot-3, 235-pounder also has 15 total tackles, 4 quarterback hurries, three pass breakups and two forced fumbles. In 2011, Van Noy was the only Division I player to record a statistic in every major defensive category.

College Football Performance Awards are selected exclusively based upon objective scientific criteria examining how individual players increase the overall effectiveness of their teams.

SERIES INFORMATION
This is just the third meeting of the Cougars and the Broncos. BYU trails in the series 0-2. The Cougars dropped a 50-12 contest in Provo in 2003 and lost a heartbreaker on a missed field goal in Boise, falling 28-27 to the Broncos in 2004.

MOUNTAIN WEST NO MORE
Boise State is currently in the hunt for its first, and probably last Mountain West championship with plans to leave for the Big East in 2013. BYU spent 12 seasons in the MW, amassing a 64-26 record in the league, winning outright titles three times and tying for another. BYU finished lower than third in the conference only two times in 12 seasons.

BRONCO'S DEFENSE
Since Bronco Mendenhall has taken over the defensive coordinating duties again (23 games dating back to 2010), BYU has allowed an average of 91.5 rushing yards per game. That mark is bested by only one other team, Alabama.