Gov. will not call special session to ban firearms, fireworks

Gov. may have ability to ban target shooting, fireworks

Gov. will not call special session to ban firearms, fireworks

SALT LAKE CITY — Gov. Gary Herbert said Monday the state forester has the power to ban target shooting in unincorporated areas of the state where fire danger is high and will work with local authorities to start putting restrictions in place.

The governor's announcement came after a 1½-hour, closed-door meeting with legislative leaders and a number of attorneys over whether a special session was needed to put a stop to target shooting in the wake of hundreds of fires.

Neither Senate President Michael Waddoups, R-Taylorsville, nor House Speaker Becky Lockhart, R-Provo, appeared to have any interest in changing the law to restrict target shooting, but both agreed it could be handled by state Forester Dick Buehler.

The governor had suggested earlier Monday he may well have the ability to ban fireworks and target shooting throughout the state, but said after the meeting with legislative leaders he didn't want to have that theory tested in court.

"None of us were into a blanket, one-size-fits-all approach," the governor said.

Waddoups said he had "total confidence" nobody's rights were being infringed upon by the decision.

"We're not trying to take away peoples' right to enjoy the holidays," he said, or their right to use firearms for self-defense or hunting.

The state forester has already implemented a ban on fireworks throughout the state in unincorporated areas. The areas where target shooting is banned, however, may be more limited.

Buehler said he would be "prudent" in issuing restrictions, even though the state "is experiencing the worst fire conditions in memory right now," already setting a record for the number of federal assistance grants for fighting blazes. 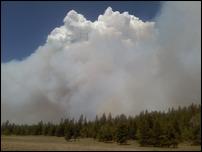 Crews are working on nine active wildfires that have blackened more than 150,000 acres across the state.

At least one recent fire was believed to have been started by target shooters, but the so-called "Dump Fire" was apparently sparked within an incorporated area. Herbert said it is up to local governments to place any restrictions on target shooting within their limits.

Earlier Monday, the governor told the Deseret News something needed to be done. He first broached the idea last week of calling a special legislative session to give local law enforcement the power to ban target shooting.

"Clearly, I think there's a need just for public safety purposes to either have the governor be able to do that, to declare an emergency situation, to maybe have a little more carte blanche ability to set parameters on firearms and fireworks," Herbert said. "If not, there's certainly the local control."

Waddoups had already questioned last week whether changing the law was needed and suggested the executive branch already had the necessary authority.

"It's campaign season," the senate president said when asked why a special session was being discussed.

He said some senators have already expressed concern that local law enforcement authorities could abuse the power to restrict gun use.

"As soon as you do it, somebody may carry it to extreme," Waddoups said.

A group affiliated with the national progressive organization MoveOn.org is gathering signatures online on a petition calling for Herbert to ban fireworks.

"How much of our state do we have to watch burn before seeing a 'ban' on fireworks? The governor has currently issued a ban on Utah state lands. This does not go far enough and leaves too much confusion as to where fireworks can or can't be used," the petition states. "We should not be using any fireworks anywhere in Utah, period."

The SignOn.org site reports that more than 4,500 people have added their names to the petition, which is scheduled to be delivered Tuesday to the governor.

Petition organizer Tom Mills said he's frustrated by "a combination of how extreme our fire danger is and the fact that we're relying on the common sense of the average individual."

"I love to be oohed and ahhed by pretty colors just as much as the next person," he said.

Herbert's reaction to the petition was that the state is not going to overreact to the fires.

"What we don't want to do is be like Congress," he said. "Congress is good at doing two things. One is nothing, and two is overreact. We don’t want to do that. Again, we want to do what is appropriate, measured and thoughtful. That's what we're doing. We're not going to overreact on that."

The governor said fireworks are already banned outside of local entities, many of which have their own restrictions.

"We can meet together and pass law after law after law. But you can't pass a law that outlaws stupid. We have foolish behavior going on out there," he said, calling again on Utahns to use common sense to prevent fires.

"We shouldn't say, 'Gee, is there a law against me parking my car over some dry weeds and maybe touching off a fire?' … Most fires are caused by foolish behaviors by us humans," Herbert said. "You can't have a law that covers everything."