Friends and family remember pilots who died while fighting wildfire

MODENA, Iron County — Family members and firefighters Monday were mourning the loss of two Idaho men who died in a plane crash while fighting a large fire that remained only partly contained in Utah's Iron County.

Todd Neal Tompkins, 48, and Ronnie Edwin Chambless, 40, were dropping fire retardant from a P2V heavy air tanker over the White Rock fire when the plane crashed in the Hamblin Valley area shortly after 2 p.m. Sunday. Both men were from Boise.

The White Rock fire has been burning since Friday, when it was sparked by lightning 25 miles east of Caliente, Nev. The 8,000-acre blaze crossed over the Utah state line Saturday and was 15 percent contained as of Monday evening.

Tompkins and Chambless were assisting fire crews by dropping retardant on the fire and officials said the plane was on its second run when it crashed.

The plane went down in a rocky canyon laden with thick juniper, Iron County Sheriff Mark Gower said, and it appeared the plane's right wing tip first hit the ground. The plane crash left a 500- to 600-yard debris field. Cause of the crash remained under investigation.

"The plane was destroyed in its entirety," the sheriff said, noting that the engines were the largest pieces still somewhat intact. "Everything else had disintegrated, basically."

Jack Horner, chief of the Hamblin Valley volunteer fire department, said when emergency crews arrived at the scene of the crash there was chance to help.

"I was one of the first on the scene," Horner said, "and there was nothing we could do. I mean, it was a ball of fire."

We do appreciate their service and we're very sad for their loss. It impacts us all &mdash; all of the emergency service workers from firefighters to law enforcement. It's tough.

When Horner and his team couldn't get to the plane, they concentrated their efforts on keeping the approaching wildfire from reaching the wreckage.

The sheriff said it is unclear if the men radioed for help. Van McKinney of the National Transportation Safety Board said Monday that it appears the plane "collided with terrain during a fire retardant drop."

The plane was owned by Neptune Aviation Services of Missoula, Mont., according to officials with the Bureau of Land Management. A phone message left with the company was not returned Monday, but McKinney said Neptune representatives and others from the Federal Aviation Administration were expected at the crash site with NTSB investigators Tuesday.

McKinney estimated a preliminary report on the crash would be released in about five days.

Tompkins, who was piloting the airplane, and Chambless were the only two men aboard the tanker.

Gower said his office had completed its portion of the investigation and had turned the men's remains over to the state medical examiner for autopsies.

"From there, family will take possession of the remains," Gower said. "They've lost, I'm sure, some dear family members while serving to try and protect life and property from these fires."

Tompkins' wife, Cassandra Cannon, said her husband — a 17-year veteran of aerial firefighting — was dispatched to the White Rock fire Sunday and immediately placed in the flying rotation. He grew up wanting to fly and found firefighting rewarding.

"He really liked this type of flying because it was always interesting and challenging to him," she said. "In the back of his mind I knew he understood the risks. But he used to come back and talk about so many instances where he felt like their work saved communities, that they had saved lives.

"It was powerful to hear him talk about that and recognize that value of what he did."

Her husband had just started flying with Chambless this season and the pair had only flown a few missions together. Tompkins leaves behind three children: Phoebe Turner, 16; Sam Turner, 15; and Paige Tompkins, 10. 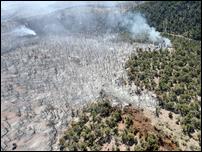 Two people were killed Sunday when an airplane assisting fire crews with the White Rock Fire crashed Sunday in the Hamblin Valley area of Iron County.

"We're all just devastated," said Cannon, adding she last saw her husband May 19 when he returned from flight training in Britain. "It's very heartbreaking for our whole family. But as this has happened, it's become clear to me how important he was to people."

Vicki Minor of the Wildland Firefighter Foundation in Boise said Chambless was a volunteer at the foundation who loved working with the children of firefighters who have been killed or injured fighting fires.

She said the job of a pilot fighting fires is "horribly dangerous," but that they save many lives on the ground through their efforts. Chambless, she said, loved the work and will be greatly missed.

Gower expressed his condolences to Tompkins' and Chambless' families on behalf of the community of Iron County. He said the loss extended to many.

"We do appreciate their service and we're very sad for their loss," Gower said. "It impacts us all — all of the emergency service workers from firefighters to law enforcement. It's tough."

“On behalf of the entire Interior family, I extend my deepest condolences to the families, friends and co-workers of the two courageous men who gave their lives on Sunday," Salazar said in a statement.

The incident was the third plane crash in Utah in eight days. A single-engine aircraft crashed in a remote area of Kane County Tuesday, killing all four people on board. Four others died in the early morning hours of May 26, when a single-engine Cessna crashed near the St. George Municipal Airport.

Sunday's incident means 15 people have been killed in plane crashes in Utah this year, compared to 11 in all of 2011, according to statistics from the National Transportation Safety Board.

Monday, two air tankers were grounded at the Color Country Interagency Fire Center in Cedar City and Gower said they would not take part in firefighting efforts for the time being.

"These tankers are critical," he said. "They are a tool (firefighters) rely on. … (The) only way they're fighting the fire in the air is the helicopter. They do a great job, but are not quite as effective as the airplane."

Chris Hanefeld of the BLM in Nevada said 235 fire personnel working on the fire Monday. Crews were hoping to have the blaze fully contained by Sunday, but were still working through a "red flag" warning.

"The winds are picking up (and) we expect wind gust as high as 45 to 50 miles an hour," Hanefeld said. "When winds shift, everything gets erratic. We're really watching weather as we try to get control of this thing."

Dealing with the death of Tompkins and Chambless has rocked the firefighting community that Hanefeld compared to an extended family.

"You may not know someone personally, but anytime someone is injured or killed like this it effects us all," he said. "When we got the word yesterday … that really had an impact on us, but we're staying focused. We're working on this fire, we're going to get it controlled and we're going to get it contained. Our hearts just go out to their family."