SALT LAKE CITY — Two female members of The 5 Browns piano quintet encouraged victims of violent crime to speak out and offered advice on how to help those victims Thursday at the crime victims conference.

Deondra and Desirae Brown, sisters who make up two- fifths of the sibling piano group, said it took them years to come to terms with sexual abuse they experienced as children. Their father was sentenced last year to at least 10 years in prison for abusing his daughters.

"Secrets and silence only help the abuser," Desirae Brown told a session of the Annual Crime Victims Conference. "So talking about it, bringing awareness to the problem, we hope will change this."

The conference, hosted by the Utah Office for Victims of Crime, was attended by people involved in providing services to victims of violent or sexual crime.

The sisters, who were adults and successful performers before approaching investigators about their father's abuse, said victims often deal with the pain of abuse on their own timetable, and it's something that must be respected.

"Everybody deals with their pain in different ways," Desirae Brown said. "I think on many levels and at different stages through the process of pain, there are different levels of denial and being able to understand and deal with that pain." 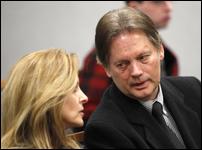 Abuse by 5 Browns father much more extensive than previously thought

The extent of the abuse suffered by the women of The 5 Browns when they were juveniles may have been worse than previously reported.

They said they hope to eliminate the statute of limitations for sex offenders in every state, so victims can still come forward, even if it's years later.

The sisters said one in four children will be abused, and most abuse occurs within families.

"So many people don't even understand the problem, Desirae Brown said. "They don't understand how rampant it is and they really don't know how to help, what signs they should look for, how to reach out to a victim."

They said they hope victims will tell their stories, and they said personal experiences are invaluable in bringing awareness to abuse.

"It's such an important thing for Desirae and I to go around and tell people the benefit of giving victims time to heal, giving them the power to not be on a timetable to prosecute," Deondra Brown said.