SALT LAKE CITY — A wrongfully fired UDOT employee says the state is holding her job, back pay and legal fees hostage because she refuses to sign a letter conceding an administrative judge erred in allowing her back to work.

The Utah Department of Transportation also wants Denice Graham to call off those in the community, particularly the Utah Democratic Party, who have publicly supported her.

"I simply couldn't believe they would ask make me to sign a letter suggesting that the judge had made a mistake in order to get my back pay and be reinstated," she said at a news conference Tuesday across the street from UDOT headquarters. "I just feel that was totally unethical and really crossing the line."

UDOT accused Graham of leaking information about who won the multibillion dollar I-15 CORE contract in 2009. She was fired more than a year later after a state audit revealed problems in the bid process, including the state paying a losing bidder $13 million.

Earlier this year, the state's Career Services Board ruled that UDOT Executive Director John Njord lacked evidence to justify firing Graham. An administrative law judge told the agency to hire her back.

I simply couldn't believe they would ask make me to sign a letter suggesting that the judge had made a mistake in order to get my back pay and be reinstated. I just feel that was totally unethical and really crossing the line.

Formerly UDOT's civil rights manager overseeing minority and small business contracting, Graham returned to work last week but to a different job. She said she now does "basically entry level work" in the engineering section and has no opportunity for advancement. The job pays $61,000 year, the same as her previous position.

Njord said Tuesday it was his idea to include the Democratic Party in the settlement negotiations because Graham had gone to the party after she was reinstated with an "inflammatory" story about the process. But he said the state directed him to remove it two days later.

"She hasn't been required to sign that letter for a long time. That was just an idea we threw out in these confidential mediations that we entered into," he said on KSL Newsradio's "Doug Wright Show."

Njord said Graham can pick up the check for her back pay anytime, but beyond that he doesn't know what she wants.

Graham's attorney, Brad Bearnson said he's not seen or heard anything about a check. And if the matter is being politicized, it's not Graham's doing.

"Denice doesn't have a political bone to pick in this thing," he said. There may be politics involved, he said, but "that's not Denice Graham's fight." 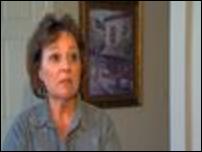 A fired Utah Department of Transportation worker says the agency made her a "scapegoat" for the huge controversy that erupted involving the $13 million settlement paid to the losing bidder of the billion-dollar I-15 CORE contract. A state review board found that she was wrongfully terminated.

State Democrats sent out a press release criticizing UDOT and Gov. Gary Herbert after the career services board reinstated Graham last month. On Tuesday, party Chairman Jim Dabakis said the state should stop "playing games" and pay Graham what she is owed.

The Alliance for a Better Utah, which organized Tuesday's news conference, said Graham wants UDOT to cover her legal fees, give her the back pay, restore her previous job and apologize.

Better Utah is calling for Herbert to appoint an independent commission to investigate UDOT's practices. The group, which promotes progressive ideas, also has started an online petition demanding Herbert give Graham her job back.

The governor's office considers it an agency personnel matter

"External attempts to politicize the process are neither constructive nor appropriate," said Herbert's spokeswoman Ally Isom. "The governor has been very clear — facts and performance, not politics, will govern the decision making in these administrative processes."