Attorney James W. Anderson filed the petition Friday with the U.S. Bankruptcy Court for the District of Utah on behalf of Diehl, whose troubles in recent years include failing to pay nearly $1 million in property taxes and being at the center of allegations of impropriety regarding a land deal near a future UTA commuter rail stop in Draper.

According to the filing, Diehl owes $41.7 million to 19 creditors, including $25.9 million to America First Credit Union for three personal guarantee loans. He also owes $11 million to Bodell Construction Co., according to his list of creditors.

American First spokeswoman Nicole Cypers said it was against the credit union's policy to provide specific information about the loans, such as when they were issued and what was used to secure them.

"We make loans that are secured by real estate collateral," Cypers said. "We have a conservative strategy in preparing for difficult economic situations, so we do have adequate allowances for loan loss in our reserves." 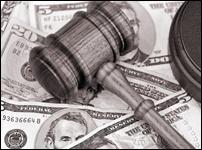 Two land development companies have filed a lawsuit against Utah developer and former Utah Transit Authority board member Terry Diehl alleging he took nearly $2 million and put it in a California retirement fund.

Diehl also owes nearly $1.5 million to South Mountain and $525,000 to GEM/Group Estates Management Inc. related to a December 2011 lawsuit the developers filed against Diehl and his company, Wasatch Pacific Inc.

Diehl was an influential member of the UTA board of trustees until resigning in May 2011 amid allegations of impropriety. In December 2010, the Legislative Auditor General's Office found Diehl had a conflict of interest and was compensated as much as $24 million in the sale of development rights to land adjacent to a future FrontRunner stop in Draper.

Diehl also has been at the center of a controversial development in the mouth of Big Cottonwood Canyon.

Last week, Cottonwood Heights leaders decided to drop a legal battle to keep Diehl from annexing 87 acres from the city to build the high-density Tavaci development. The land is now part of unincorporated Salt Lake County.

City leaders didn't want to allow the property to break away from Cottonwood Heights, but expected legal costs of more than $500,000 were too high to authorize, Mayor Kelvyn Cullimore said.

In August 2011, a Deseret News and KSL investigation revealed that Diehl owned nearly $1 million in back property taxes on the Tavaci land.

Cullimore said news that Diehl had filed for Chapter 11 bankruptcy protection came as a surprise. As for how the action impacts the future of Tavaci, that remains to be seen, he said.

"I really don't know how to read those tea leaves," Cullimore said. "I would suspect that property will be part of the bankruptcy. And as with any other asset in a bankruptcy situation, he'll either have to show how he can use it in the reorganization plan, or he'll have to turn it over to the creditors."

Cullimore said it's likely that Diehl filing for bankruptcy "was part of a plan" and not just an act of financial desperation.

"I'm sure we'll find out sooner than later what that plan is relative to that property," he said. "I would think that it may cause some delay in pursing (development of Tavaci) with the county."

Other debts include $277,000 to Continental Bank for a loan and judgment; $239,000 to Better Diehl LLC, which is listed by the Utah Department of Commerce as a company owned by Diehl; and $72,000 in spousal support.

The lawsuit centers on several apparently unauthorized money transfers Diehl made after a land transaction between the firms and Draper.