SALT LAKE CITY — As Springville police investigated the fatal shooting of man who broke into a home Thursday, Utah lawmakers were debating a bill regarding the civil liabilities of someone who is defending their home or family.

HB129 clarifies that an individual is justified in defending his or her home and family against criminal activity and may not be held civilly liable for damage or injury to perpetrators. The bill received preliminary approval in the Utah Senate. 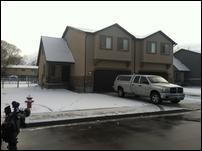 A homeowner fatally shot a would-be robber who entered his house in Springville early Thursday morning. The intruder apparently stopped for a snack and changed clothes before going upstairs to threaten the home's residents.

Shortly before 3 a.m. Thursday, a male intruder was shot to death by a husband and a father of three after the man entered the family home in Springville and demanded money.

Police said the man entered the house, changed out of his wet clothes, prepared himself a snack and then walked upstairs to demand money. Instead of handing over cash, the father shot and killed the intruder.

While the timing of these events was an odd coincidence, Painter said the genesis of his bill was the home invasion slaying of a Mount Pleasant couple in late December.

The bodies of Leroy Woody Fullwood, 70, and Dorothy Ann Fullwood, 69, were found shot to death in their homes after police were asked to make a welfare check. The suspects in the case face charges in Utah and Nevada as part of a crime spree, but charges have yet to be filed in Utah in connection with the Fullwoods' slayings.

Painter said he worked with the Sanpete County Sheriff Brian Nielson in preparing the legislation to ensure that victims of home invasions have no civil liabilities.

"If you're being victimized, you can defend yourself without being sued by the person trying to take advantage of you or your property." Sen. Curt Bramble, R-Provo

Had the Fullwoods been able to defend themselves against the intruder who entered their home, Painter has wondered if they could have been "held civilly liable if they had defended themselves and their home."

"To me, that's just not appropriate," he said.

While Utah's criminal code addresses the issue of self-defense and home invasions, Painter said he believes HB129 "absolutely forecloses the civil side of it."

"If you're being victimized, you can defend yourself without being sued by the person trying to take advantage of you or your property," Bramble said.

Painter said he will seek one additional amendment asking the governor to sign the bill immediately after its passage.

People who are victims of home invasions, he said, should not be further penalized for attempting to protect themselves, their families and their property.

"What parent is not going to do everything they can to defend their family and their kids?" said Painter.