‘How could a person do this?' viewers ask

SALT LAKE CITY — In the wake of Josh Powell's actions that killed his sons and himself Sunday, KSL has heard from many viewers asking, "How does a person do this?" "Are there warning signs?"

Unfortunately, the public is familiar with domestic abuse cases that escalate into murder/suicide. But when young children are involved, many people are devastated and want answers.

Dr. Don Strassberg, a professor of psychology at the University of Utah, said, "What does it say about the father, the kids' grandfather, in this case, and their father that all this sexually explicit material seems to be part of their lives?"

Strassberg said that is why the judge in the Powell/Cox custody case ordered a psycho-sexual evaluation for Josh. The test includes interviews about parents, experiences growing up, sexual attractions and responses. Experts say this is unusual in a custody case, and as he faced the test and the possibility of losing his children, Josh Powell exhibited psychopathic behavior.

The fact that he murdered his own sons shows that he did not regard them as real people.

Julie Hanks, a licensed clinical social worker, said, "The fact that he murdered his own sons shows that he did not regard them as real people. I think he did see them as possessions."

What causes a person to disconnect? Pornography allegedly played a role in the Powell family. Josh's father, Steven Powell, is in jail facing child pornography charges, and it has been alleged that Josh had images on his computer.

Susanne Gustin, a criminal defense attorney, said, "It seems to me that it was adult pornography, but it was probably pretty hard core. That raised some concerns in the investigators' minds and in the judge's mind." 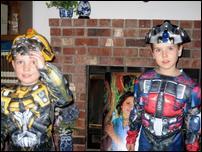 Startling information came from the results of an autopsy on Charlie and Braden Powell Monday.

Pornography alone can be harmful, but coupled with severe personality disorders it can lead to destruction.

Another licensed clinical social worker and therapist, John Murdock, said, "Pornography, in particular, is going to shut down your frontal lobes, and that's where you are going to do your reasoning, your emotional regulation and your judgment, things of that nature. It's like being in a car with no brakes."

Professionals say it is very difficult for family members to deal with a loved one who may be psychopathic and who may hide behaviors. They say it's the same for those who are addicted to pornography, but many therapists and groups can help with that problem.