SALT LAKE CITY — A state senator wants to make it a crime to enforce federal regulation of food grown and sold in Utah.

Sen. Casey Anderson, R-Cedar City, is proposing a bill that would prohibit federal regulation of agricultural products such as vegetables and meats that remain in Utah after they are made, grown or produced.

"That provision is basically put into place to protect Utah agents. Your job is to enforce Utah law, not federal law," Anderson said, adding there needs to be some teeth in the measure. 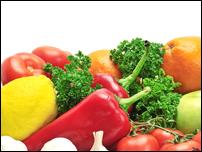 A Wisconsin factory worker worried about layoffs became a dairy farmer. An employee at a Minnesota nonprofit found an escape from her cubicle by buying a vegetable farm. A nuclear engineer tired of office bureaucracy decided to get into cattle ranching in Texas.

Legislative attorneys attached a note to the bill saying there is a "high probability" that a court would find it unconstitutional.

The legislation is in response to the Food Safety Modernization Act that Congress approved and President Barack Obama signed into law last January, Anderson said. Touted as the most sweeping reform of food safety laws in 70 years, he said it has the potential to impact small farms and community gardens.

Agricultural products grown or made in Utah that are not sold across state lines should not be subject to interstate commerce rules, he said.

The bill also defines a Utah product. To distinguish it from other products, producers would be allowed to use labels such as "Made in Utah," "Grown in Utah" or "Produced in Utah."

Though the Utah Farm Bureau favors less regulation than more, it isn't sold on Anderson's proposal.

"I think we're trying to deal with a perceived problem that's not a problem," said Sterling Brown, the bureau's vice president for public policy.

Brown said the farm bureau doesn't know whether the bill would inhibit farmers and ranchers from freely selling their products around the country and the world.

"Because we don't know that, we can't get our arms around it and bless it, so to speak," he said.

I think we're trying to deal with a perceived problem that's not a problem,

The Utah Department of Agriculture already defines Utah products through its "Utah's Own" program. Having another definition would be confusing, he said.

"That's going down a risky road as well," Brown said.

Also, Brown said he doesn't see the need to make it a crime for the state to enforce federal regulations. "I think that's moving in the wrong direction," he said.

Utah has 16,600 farms, according to the agriculture department.

One of them belongs to Charlie Black. He has grown lettuce, carrots, corn, pumpkins and other vegetables at Black Island Farms in Syracuse for 50 years. Much of it is sold locally at farmers markets and harvest festivals. He said he supports the bill.

"We don't have much federal regulation now on our local farm, but I assume it's there and could come," he said.

"We're trying to understand the depth of what it means," he said.