Why I give thanks: Thankful for a simple Angolan driver

It was a simple driver.

It was 2005 when my husband and I accepted a three-year job assignment to West Africa. Armed with enthusiasm and faith, we packed up our children and a few belongings and moved to Angola, a country that had just finished a 30-year civil war and was in the painstaking process of rebuilding what the conflict had torn apart. People back home assumed we would compare what we had with what the Angolans hadn’t — lower mortality rates, better education and, of course, things. As Americans we had a lot compared to the average Angolan — lots and lots of things.

I am grateful for where I come from and the advantages that I have, but that’s not why I give thanks. I am grateful for a Heavenly Father who sustains me and sends me messages nearly every day that He is there, that I am loved and — most of all — that I’m not alone. 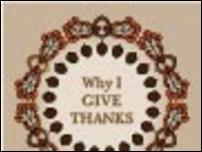 Why I Give Thanks

Read all our stories of gratitude this whole week of Thanksgiving in the <a href="http://www.ksl.com/? nid=1000">Happy Living</a> section on Page Two of ksl.com.

In Angola it was too dangerous to drive on our own so our company provided us with a pool of drivers that changed from day to day. It was rare to get a driver who spoke English, so unless you could communicate in Portuguese the trips were fairly quiet. Unlike other expats who had one regular driver with whom they grew close, we rarely got to know one specific driver very well. They didn’t even know our names.

I was in the car, returning from a church activity, when a wave of homesickness hit me. My parents had died several years earlier and I didn’t have much contact with siblings. I was feeling the keen absence of family support. I was really struggling. All of the sudden I started to cry, and as much as I tried, I couldn’t stop.

I felt so alone and so unloved, lost and invisible in a foreign country. I wondered who outside of my husband and children really cared about me.

Why I give thanks: The power of a child's thank you

We have all been taught that saying "thank you" is both polite and important. But how often have you thought about the impact of your "little" thank you? You just never know when two words will change a life.

The driver was quiet, as most drivers were. They were not obligated to chat or get to know us beyond picking us up and dropping us off. I sat in the back seat, staring out the car window at everything that was so unfamiliar. He remained respectful and quiet until we were almost home, then he looked at me in the rearview mirror and simply asked, “Is Madam OK?”

The question was so tender, so sincere. We both knew that even if I opened up and told him everything I wouldn’t be able to communicate in a way that he could understand. Just to have him ask in his very simple English touched me so profoundly that, even to this day, when I think about that moment it still brings tears to my eyes.

He didn’t have to ask. He didn’t even have to acknowledge me in any way. Most drivers would have ignored me, dropped me off and probably never given it another thought. But this Angolan man crossed cultural, racial and societal barriers just to let me know that I was not invisible, that he — a stranger — was worried about me.

I nodded through the tears, said I was OK, and thanked him as I got out of the car.

I never saw him again after that day, but I will never forget him. God reached out to me through a simple driver. I was not unloved. I was not invisible. I was not alone. And for that, I will always give thanks.

Ramona Siddoway is a freelance writer who is grateful for good friends and a close family that make this earth experience a little less lonely. Read more of what she is grateful for at ramonasiddoway.wordpress.com.