OGDEN — For the first time, investigators confirmed Tuesday they consider Eric and Dea Millerberg "persons of interest" in the disappearance and death of 16-year-old Alexis Rasmussen.

Millerberg, who has a lengthy criminal history, was sentenced to 36 months probation in 2010 after pleading guilty to two counts of credit card fraud and one count of forgery, all third-degree felonies.

Prosecutors said Millerberg violated his parole on several occasions in recent weeks, using OxyContin and failing to report for his required check-in with Adult Probation and Parole. He also failed to complete a required substance abuse treatment program, according to court records. This was after he admitted using heroin on May 31, court documents state.

Wearing an orange Weber County Jail jumpsuit, the heavily tattooed Millerberg — reportedly a member of the Silent Aryan Warriors gang — told the judge he had been in a car accident and had a prescription to pain medication he was taking. 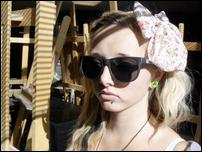 Rasmussen's loved ones remember her as happy, kind and loyal

Losing a loved one is often difficult, but losing a cherished family member at a young age is especially tragic and even harder to deal with.

But Hadley agreed with prosecutors who argued that given Millerberg's criminal record, he continues to disregard the chances given to him, and the judge imposed the original sentence of up to five years in prison.

No mention was made of the Rasmussen case during Millerberg's brief court hearing.

Outside the courtroom, however, nearly all of the questions by members of the media attending the hearing focused on the Rasmussen investigation.

Millerberg's attorney, Randall Marshall, had no comment on whether his client had discussed Alexis Rasmussen with him.

"If he had, I wouldn't be able to comment anyway. I really have nothing to say," Marshall said.

Smith, however, said for the first time that both Eric and Dea Millerberg are people of interest in the case.

He also said that evidence collected showed Rasmussen died on or about Sept. 11 inside a house and "did not die of natural causes." Her body was then transported to a rural area of Morgan County and dumped. Smith would not say what house Rasmussen was believed to have died in or if it was the Millerbergs'.

Alexis reportedly went to the Millerberg home on the night of Sept. 10 to baby-sit their two young daughters. About 11:30 p.m. on Sept. 10, Alexis texted her mother to report that the couple wasn't home yet. Her mother told her daughter to make sure she got paid and to stay the night at the Millerbergs' house because it was so late. That was the last contact her mother had with her.

Timeline of events
Sept. 10 - Alexis went to the house of Eric and Dea Millerberg, 3228 N. 900 East, to babysit. 10:20 p.m. - Surveillance video captures Dea Millerberg and Alexis picking up a prescription at Layton Walgreens. Dea leaves Alexis and resumes night out with Eric Millerberg. 11:30 p.m. - Irritated by the long night out, Miera sends the last of 10 - 15 unanswered texts. She tells Alexis to spend the night there and make sure she gets paid. The Millerbergs say that Alexis left the house about this time to see a friend. 12:30 a.m. - Alexis exchanges texts with a boy. The content of these texts is unknown. Alexis was at the boy's house the night before. The boy says he did not see Alexis that night. No one is known to have seen or heard from Alexis after this point. The Millerbergs are later arrested unrelated charges. Oct. 25 - The Millerbergs are called'persons of interest' for the first time, but are not officially considered suspects.

Alexis reportedly texted a boy around 12:30 a.m., but the boy told the girl's mother, Dawn Miera, that he didn't see her at all.

The next day, Miera said her daughter did not return texts, and phone calls to Alexis' phone went straight to voice mail. When Miera went to the Millerberg house, she said she did not get any straight answers and said the couple wasn't even coherent.

Eric Millerberg was booked back into jail on a warrant on Oct. 3.

On Oct. 7, Dea Millerberg, 38, was charged with two counts of falsely obtaining a prescription, a third-degree felony. A preliminary hearing on her case is scheduled for Wednesday.

Smith also reiterated Tuesday that Alexis' death is being treated as a homicide, but that does not necessarily mean she was murdered. He said homicide charges come in varying degrees, from negligent or accidental homicide to capital murder.

His office, Smith said, may be looking at homicide and desecration of a dead body charges. The key to determining charges may come from the full autopsy report, which has yet to be returned and could take several weeks.

The Rasmussen's LDS bishop, Ron Flemm, announed that the family will hold a press conference Wednesday to publicly thank all those who investigated Alexis' case and helped look for her while she was missing.

Alexis' mother, who has not spoken publicly since police announced they had found her body, seems to be slowly improving each day, but the death has been extremely difficult for her, Flemm said.

He said funeral services will be held Saturday at the North Ogden LDS Stake Center. Alexis will be buried at the Valley View Cemetery in West Valley where her uncle is buried.