BLANDING, San Juan County — Jason Workman knew since he was a young boy that he wanted to be a Navy SEAL.

He knew the odds of making the elite fighting force were slim. But Workman not only accomplished his goal but he also became a member of the Elite Navy SEALs Six team.

Saturday, Petty Officer First Class Jason Workman, 32, was among the 31 Americans killed, including 22 members of the Elite Navy SEALs Six team, when their helicopter was shot down by insurgents in Afghanistan.

Sunday, the small Southern Utah town of Blanding, where flags flew at half staff, was in mourning over the loss of their hometown hero. The town of about 3,000 people has already lost two other servicemen in the war.

We are so proud of someone like Jason being from a small town to become an elite special forces soldier.

"This community loved what this young man was doing for us, as well as our other soldiers are doing for us," said Toni Turk, Mayor of Blanding. "You drive around the community and the flags are out."

Workman was a man that even if residents hadn't personally met, they were proud to call him one of their own.

"We are so proud of someone like Jason being from a small town to become an elite special forces soldier," said his childhood friend Tate Bennett.

Workman was a star athlete in Blanding, playing high school football, baseball and basketball, reaching All- State status in at least two of those sports. He was also a strong swimmer and competed in triathlons, Bennett said.

"I knew that this young man was doing what he loved; what he aspired to do as an individual, as a human being," said San Juan High School Athletic Director Monty Lee.

But what made Workman a hero to many, Bennett said, was how well-rounded it was.

"He was not only a real good athlete and real popular kid, but he was pretty academic. He took a lot of AP classes. He was just really, really well rounded. He was very personable, very out going."

"He would do anything to help the guy across the table from him," said family friend Rick Eldredge. "He would give you the shirt off his back. He was just willing to do anything for anybody and he's proven by giving his life to this country." 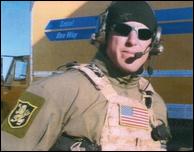 A U.S. military helicopter was shot down Saturday, killing at least 30 Americans. One of those killed was an Elite Navy SEAL from a southeastern Utah community.

Workman was the youngest of four brothers. Bennett remembered when Workman's older brother graduated from West Point when he was about 14, he was adamant even then that he was going to grow up to become a Navy SEAL.

The other time he remembers Workman being vocal about his conviction to be a Navy SEAL was right after the 9-11 attack on the World Trade Towers.

After going on a LDS mission to Brazil (which he finished in Philadelphia due to illness) he went to Southern Utah University and later enlisted with the U.S. Navy.

"He was doing it for sole purpose of becoming a seal," Bennett said Workman told him.

Bennett said that Workman knew the odds of becoming a Navy SEAL were slim. But he was determined to make it.

"Not making it just wasn't an option," Bennett said. "He didn't become a Navy SEAL by chance. He knew that's what he wanted at a young age and made it happen."

Bennett recalled Workman always had "some crazy story" about the kind of training Navy SEAL prospects were put through.

Once he became a SEAL, Bennett said it was his understanding that Workman's speciality was in explosives.

But he admitted he didn't even know Workman was part of the Elite Team Six until recently.

Not making it just wasn't an option. He didn't become a Navy SEAL by chance. He knew that's what he wanted at a young age and made it happen.

Even if Workman had not accomplished his goal of becoming a Navy SEAL, Bennett said he "would have been a hero for somebody in some other aspect, like a firefighter or law enforcement."

Bennett believes that Workman's idea of his purpose in life was to serve and help others. He was big, strong and smart and, "recognized that his gift was best used in helping other people."

When Ian Nielson talked to Workman last month, all he could talk about was his new son and his plans after his tour in Afghanistan.

"He was planning on coming back here for Christmas and he was asking me about the deer hunt coming up," Nielson said.

Workman returned to his hometown nine months ago to train area police and deputies, and was planning to return in December to do some more training

Now a community is grieving his loss, but is proud to call him one of their own.

"I think that everyone should remember Jason as a hero more than anything," Nielson said.

Workman is survived by his wife and 21-month-old son who live in Virginia.

The Workman family released a statement thanking everyone for their prayers and support.

"Jason had been in the service for almost 8 years. He loved his job and was great at it. Jason was the Best of the Best. Jason was admired by so many and will be dearly missed," the family said in their prepared statement.

The family said in their statement that Workman would be buried later this week in Arlington National Cemetery.

Written by Sandra Yi with contributions from Pat Reavy.