SALT LAKE CITY — The LDS missionary who was mauled by lions in a Guatemalan zoo has returned to Utah, his family says. Alan Oakey, the father of injured missionary Elder Paul Richard Oakey, issued the following statement Saturday:

"The family of Elder Paul Oakey is asking for continued prayers and for a miracle. The young missionary is back in Utah to further improve his condition."

The family of Elder Paul Oakey is asking for continued prayers and for a miracle. The young missionary is back in Utah to further improve his condition.

The family of the 20-year-old missionary's from St. George does not wish to make any further public statement at this time.

Elder Oakey had been serving the past 19 months in the Guatemala City South Mission of The Church of Jesus Christ of Latter-day Saints. On a visit to the zoo with other missionaries, he climbed a tall concrete wall to have his picture taken in front of the lion exhibit.

When Oakey turned his back to the lions, they crept up on him, his father said after the incident. One lion reached through the cage and grabbed the missionary's right leg, causing him to fall back against the cage. A second lion then grabbed Elder Oakey's left arm with its mouth.

One of the lions bit a chunk out of Elder Oakey's right calf. The other lion clamped down on the missionary's left bicep, and during the attack had most of the man's left arm in its mouth. Other missionaries who were at the zoo with Elder Oakey had trouble scaling the wall as they tried to rescue him. 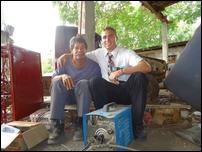 Alan Oakey's 20-year-old son, Paul, is recovering in a Guatemalan hospital after being mauled by two lions Monday at a zoo.

Oakey battled the lions for about two minutes before he was able to free himself and escape the cage.

"He was punching one of the lions with his right arm," his father reported after the attack. "If he would have given up, the two-minute battle would have ended up very differently. I wouldn't have my son right now."

Oakey's missionary companion eventually made it into the fray and used a bar to help pry open the mouth of the lion whose jaws were locked on the missionary's biceps. Oakey had lost about three pints of blood during the battle.

He was rushed to a nearby hospital in Esquipulas, and was later transported to Guatemala City for further medical attention.

LDS Church officials had issued a statement Tuesday, saying "our thoughts and prayers are with Elder Oakey and his family as he goes through this difficult time."

And prayers are exactly what his son needs, Alan Oakey said.