SALT LAKE CITY -- The testimony of Elizabeth Smart obviously is a key element in the trial of her accused kidnapper, Brian David Mitchell.

Monday Smart testified about being abducted from her bedroom in June of 2002. Mitchell faces life in prison if he's convicted. 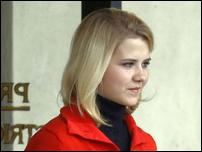 Elizabeth Smart testified for a second day Tuesday at the trial of her accused kidnapper, Brian David Mitchell.

Attorney and legal analyst Greg Skordas, who is not involved in the case, told KSL Tuesday morning the defense will question Smart once prosecutors finish with her testimony. Skordas said since Mitchell's attorneys have already outlined their defense as being one of insanity, they may not have many questions for Elizabeth.

"If their defense is one of insanity, then their witnesses will be experts -- will be medical doctors -- and she doesn't fit into that. In fact, they've already said to the jury, ‘You'll hear very bizarre things,'" Skordas said.

"But they could use her somewhat to their advantage. Certainly sometime during those several months of abduction, their client, Mr. Mitchell, did things that are bizarre, did some things that may come across as complexly psychotic, completely out of the realm of normalcy. So they could probably ask her questions about those," Skordas said.

He said it's very hard to prove insanity.

"You can see the government right now is asking Elizabeth questions about sort of how he acted. She's even said he seemed to know what he was doing. He seemed to have things planned out," Skordas said. "(Prosecutors) are anticipating this insanity defense."

Skordas reiterated that the facts of what happened are not in dispute.

"I don't think the defense will get anywhere saying he didn't touch her, didn't abuse her, he didn't assault her. What they'll say is whatever he did, he did so with a completely delusional state of mind," Skordas said.