SALT LAKE CITY -- A court ruling Tuesday stunned attorneys on both sides of the case when the Utah Supreme Court threw out the convictions of polygamist leader Warren Jeffs.

The high court reversed Jeffs' 2007 conviction of rape as an accomplice for his role in facilitating the marriage of 14-year-old Elissa Wall to her 19-year-old cousin Allen Steed. The court ruled jury instructions on what constitutes "lack of consent" were in error -- that Judge James Shumate failed to properly instruct the jury about what the state had to prove. The court also ruled Wall's lack of consent may not have been properly proven.

The case that dominated public attention in Utah three years ago now lies in ruins. Jeffs' two convictions are overturned, his sentence thrown out. 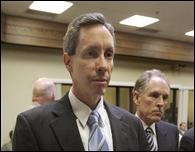 The Utah Supreme Court has reversed the convictions of polygamist leader Warren Jeffs and ordered a new trial.

Wall, who is now an adult, says she's in shock and disbelief but vowed to fight back after the ruling Tuesday.

"This is not the end, and I by no means am backing down," Wall said. "Wrongs have been done and justice has not been served."

The Supreme Court ruled, among other issues, the jury should have been told Jeffs had to have the intent Walls would be raped when he coerced her into marriage.

Wall says she was instructed to have sex during her marriage to her cousin, and she believes the jury knew that.

"Whatever happened to me after that while I was in that marriage was because of Warren Jeffs' absolute control," she said.

Jeffs' attorney, however, says the faulty instructions stemmed from improper, insupportable charges and that prosecutors "mixed and matched" legal theories to convict an unpopular religious figure.

"They did that, again, reaching, stretching, pushing the law beyond the limits of what was reasonable," Bugden said. "And so the Supreme Court agreed with us on essentially every point, that all the jury instructions were wrong."

The Utah Supreme Court also ordered a new trial in the case, though prosecutors have not said if Jeffs will ever be re-tried in Utah. If the state decides to re-prosecute, Wall says she 100 percent behind it.

"I want to see justice served," she said. "I want little girls like myself at 14 years old to be protected. There has to be laws put in place to protect us that give us the protection that we so desperately need."

Jeffs' biggest challenge is coming in Texas, where he's accused of marrying himself to a 12-year-old and fathering a child with an underage girl.

Wall shows a lot of optimism that prosecutors in Texas will be successful with their case against Jeffs. She also says if Utah prosecutors ask her to testify in a new trial, she'll be ready.

"This is just another chapter in the story," she said. "It is not the end."

Wall is currently in a witness protection program with an entirely new identity and says she fears retribution from the FLDS group. She says her decision to step forward and testify brought much pain and was very difficult, but she says she wouldn't change a thing.

"He controlled thousands of people in fear for many years, and there is many abominable sins and many things that have occurred to thousands of people because of his influence," she said. "If I had to do this again, I wouldn't change a thing because I stood up for what I believed in."

Anti-polygamy activist Rowena Erickson says the overturned conviction is a blessing in disguise because the ruling opens the doors for Texas authorities.

"Texas is very aggressive," Erickson said. "They know the law, they know their rights, and they know that this is a criminal act being perpetrated on women and children."

Erickson's anti-polygamy group Tapestry Against Polygamy no longer exists, but she feels Texas courts will now do right what she calls "victims of polygamy."

The ruling comes as Washington County authorities investigate allegations that Wall may have lied about her medical records that were used in the trial. County Attorney Brock Belnap launched an investigation in February after he was told by a third party that Wall's "medical records had all been created in one day to make it look like she had seen a caretaker on several different occasions." The status of that investigation was unclear Tuesday.