SALT LAKE CITY -- The convention is over, the incumbent is defeated and now the race is on for Utah's surviving Republican candidates in the race for the United States Senate.

Monday, Mike Lee and Tim Bridgewater hit the ground running. They defeated long-time incumbent Sen. Bob Bennett and are now battling it out in a primary.

Now, Lee and Bridgewater's job is to stand out to a much larger group of voters. 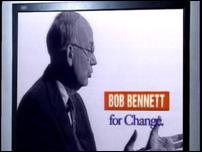 Bennett's opponents use same tactics he used to get into office

The ouster of Sen. Bob Bennett marks a political watershed -- the first time in seven decades a sitting U.S. senator from Utah failed to win his party's nomination.

The two Republican Senate candidates are doing the same things at different times: Bridgewater went door to door in the afternoon, and Lee appeared on MSNBC.

Both Lee and Bridgewater appeared on cable networks, but they know their focus has to be closer to home for the next six weeks: to voters in the Republican primary.

"We've got a plan to spread our message. It's the same message we've been spreading all along," Lee said. "We will spread statewide -- not just to delegates, but to every voter in Utah."

"What I've always done in my life is work hard, and that's what I'm doing now," Bridgewater said. "We'll take our message to voters. I hope to meet as many as I can."

On Saturday, delegates eliminated Bennett from the race. Bennett and his record were a focus; now, the remaining candidates just have each other.

"The main difference you will see is that Mike Lee is a an attorney, Bridgewater is a businessman," Jowers said. "They will make a lot of extrapolations from that single point."

It could be an expensive race. Both candidates want to win, but neither wants it to turn nasty.

"I hope and expect that both campaigns will continue to play clean and above board and not resort to cutting each other down, and stick to their own message," Lee said.

"We ran a very solid, straightforward campaign to the delegates," Bridgewater said. "I think they responded to that positive message, and I hope that's how this primary goes as well."

There's a lot of work ahead. Voters can expect to hear and see lots of ads as this political year heats up.