Religion becomes a topic of discussion in immigration debate

SALT LAKE CITY -- The religion card is being played on both sides of the debate of whether to adopt Arizona's new immigration law in Utah.

Latino activists are going hard after lawmakers like Rep. Stephen Sandstrom, R-Orem, who is crafting a tougher law for the 2011 legislative session.

Proyecto Latino de Utah director Tony Yapias says as a member of the Church of Jesus Christ of Latter-day Saints, Sandstrom should have more compassion.

"Where's the compassion?" Yapias asked in an interview with KSL Newsradio. "Representative Sandstrom is a person who went on a mission to Venezuela."

It's something community activist Michael Clara, who is LDS, is also pointing out. He calls it "historical amnesia."

"We come from a religion of people that were from an extermination order from the state of Missouri," Clara said. "It's baffling to me that we have this ‘rule of law' crowd that can forget our own history."

"To me that's absolutely offensive," Herrod said. "There's no comparison. The Mormons in Missouri were legal citizens - they had every right to be there."

Herrod says his belief in the LDS Church has led him to fight illegal immigration. 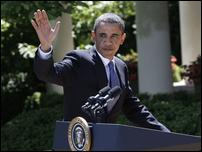 Immigration reform has become the first of President Barack Obama's major priorities dropped from the agenda of an election-year Congress facing voter disillusionment.

"If we truly believe that God is not a respecter of persons, he would want us to treat everybody equally," Herrod said.

He says that means treating immigrants equally and giving the people who want to come to this country legally a fair opportunity.

The LDS Church itself has not commented on the Arizona immigration law.

More than two years ago, Elder Marlin K. Jensen of the Seventy urged Utah lawmakers to have a spirit of compassion as they considered an immigration crackdown.

"Immigration questions are questions dealing with God's children," Jensen told an Interfaith Dialogue on Immigration at Westminster College in February 2008, as quoted in the Deseret News. "I believe a more thoughtful and factual, not to mention humane approach is warranted, and urge those responsible for enactment of Utah's immigration policy to measure twice before they cut."

"At the end of the day this is a moral question. We're dealing with human beings - human beings who are striving to make a living for themselves, to keep their families together, Wester told KSL Newsradio's "Doug Wright Show" Wednesday.

Wester says he believes the Arizona law would naturally target those of a different skin or accent.