SALT LAKE CITY -- A stunning admission came late Thursday night as the Utah Legislature wrapped up its session. The shock, and the fallout, continued Friday.

Rep. Kevin Garn, the Republican Majority Leader of the House, admitted that in 1983 he got into a hot tub, naked, with a 15-year-old girl. He also acknowledged paying her to keep quiet.

Republicans, and even Democrats on the hill, are not calling on Garn to resign. They're waiting to see what decision he makes on his own.

"I was 28 years old. I foolishly went hot tubbing with a girl half my age," Garn told his colleagues Thursday night. "Although we did not have sexual contact, it was inappropriate and it was clearly my fault. One of the consequences of that decision were the negative impact on that young person's life," House Majority Leader Kevin Garn said.

The girl, now a woman, Cheryl Maher, allegedly threatened in 2002 to reveal the relationship. She says she worked for Garn at his businesses and as a babysitter. 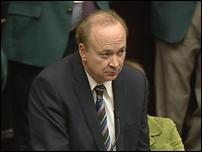 The woman at the center of the latest scandal to rock the Utah State Capitol is speaking out, and she says House Majority Leader Kevin Garn did not tell all.

House members applauded the majority leader for revealing his secret, but for many it was a shocking bookend to an episode at the beginning of the session: Senate Majority Leader Sheldon Killpack resigned because of a DUI charge.

"Well, uh, we would have preferred they didn't occur, that's for sure," Chairman Dave Hansen said. "But they will, and when people get to the election this fall, it's going to be based on the party principles and the candidates that are running."

The House Minority Leader chose not to make hay.

"This is too personal to become political, and I think this is something that has to be between him and his family and his constituents," Rep. David Litvack said.

Kirk Jowers, executive director of the Hinckley Institute of Politics, was clearly troubled.

"It was an inexcusable moment, whether it was 25 years ago or 25 minutes ago; and then with the hush money, it's a very difficult moment," Jowers said. "A lot of people are having a hard time with the standing ovation on the House floor. Sympathy is probably warranted, but cheering is not."

One person who says he is willing to overlook the hot tub incident is Garn's newest challenger for his seat as representative for District 16.

"I do not believe a mistake disqualifies anyone from a position of leadership. We all make mistakes, and I am not immune," said candidate Chris Crowder.

We also spoke with the Republican chair for Davis County. She says as long as there aren't legal ramifications with Garn's confession, she will continue to support him in a re-election campaign.