PROVO -- One of the top generals in the U.S. Army visited BYU Thursday evening.

Gen. David Petraeus is the commander of the U.S. Central Command, which means he commands troops in 20 countries, including Iraq and Afghanistan.

The general began his remarks by listing the Top 10 reasons BYU students make such great soldiers.

"And number one: They understand how far Iraq has come over the past seven years. In fact, they think that Iraq's old spot in the 'Axis of Evil' can now be filled by the University of Utah," he said, jokingly. 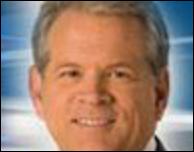 See Bruce Lindsay's entire interview with Gen. Patraeus on <a href=http://www.ksl.com/index.php?nid=750>"Sunday Edition,"</a> this Sunday at 9 a.m. on KSL Channel 5.

Before speaking at BYU, Petraeus sat down for an exclusive interview with KSL's Bruce Lindsay. The two discussed the difference between the wars in Iraq and Afghanistan, the recent election in Iraq, and a timetable for getting U.S. troops home.

See the entire interview on "Sunday Edition with Bruce Lindsay," this Sunday at 9 a.m. on KSL Channel 5.