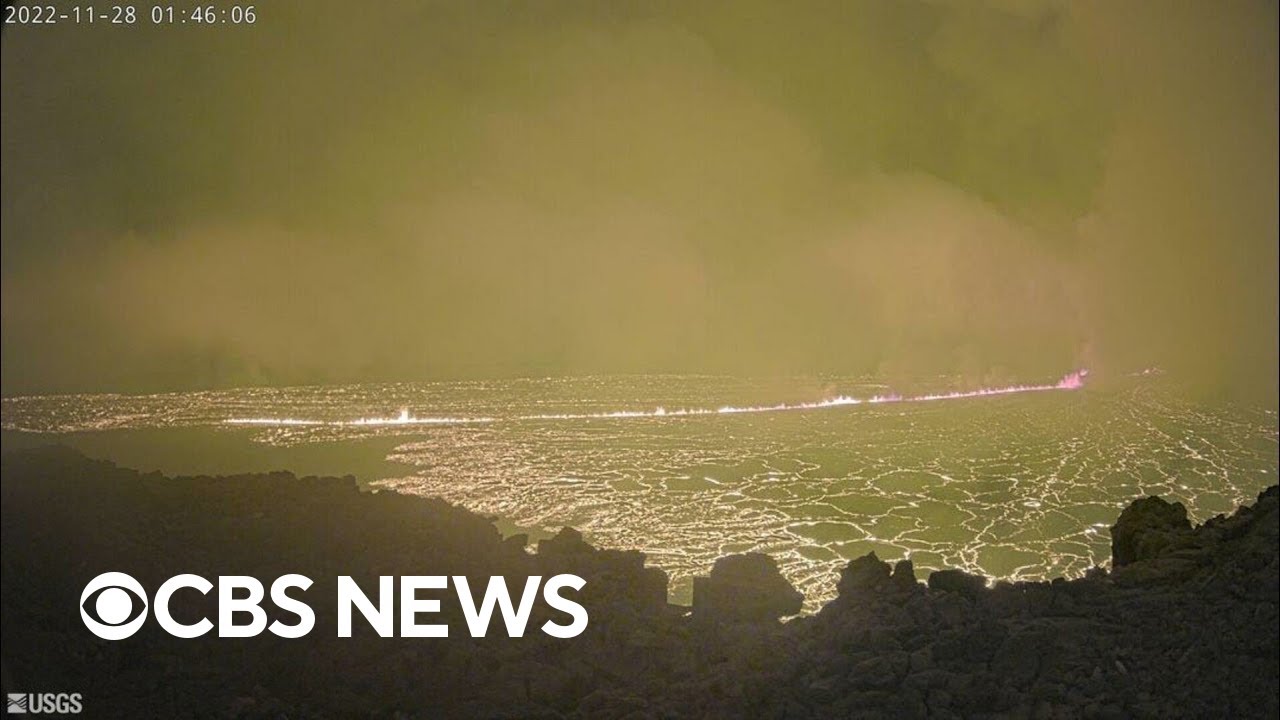 The eruption began late Sunday night in the summit caldera of the volcano on the Big Island, the U.S. Geological Survey said. Early Monday, it said lava flows were contained within the summit area and weren't threatening nearby communities.

"However, lava flows in the summit region are visible from Kona. There is currently no indication of any migration of the eruption into a rift zone," the Hawaiian Volcano Observatory said in a statement. A rift zone is where the mountain is splitting apart, the rock is cracked and relatively weak and it's easier for magma to emerge.

How long the volcano erupts and whether it could cause lava to flow to populated areas of the island is impossible to predict, said Miel Corbett, a USGS spokesperson.

"But I can tell you, we're in constant communication right now with Hawaii Civil Defense, and they're providing updates to community members," she said.

Even though it noted there is no indication of lava exiting the summit, the civil defense agency said it has opened shelters in Kailua-Kona and Pahala because it has reports of people self-evacuating along the South Kona coast.

"Multiple images have surfaced on social media indicating lava activity outside of the caldera. At this time, no lava migration into a rift zone has been confirmed," according to a statement.

The USGS warned residents at risk from Mauna Loa lava flows should review their eruption preparations. Scientists had been on alert because of a recent spike in earthquakes at the summit of the volcano, which last erupted in 1984.

Mauna Loa began to erupt at 11:30 PM HST on Sunday. The eruption is currently confined to the summit, and there is no indication that magma is moving into either rift zone. HVO is closely monitoring. Follow @USGSVolcanoes for updates. Find webcams here: https://t.co/PCmuqZqpcBpic.twitter.com/dv6vJBsASo

Portions of the Big Island were under an ashfall advisory issued by the National Weather Service in Honolulu, which said up to a quarter-inch (0.6 centimeters) of ash could accumulate in some areas.

Mauna Loa is one of five volcanoes that together make up the Big Island of Hawaii, which is the southernmost island in the Hawaiian archipelago.

Mauna Loa, rising 13,679 feet above sea level, is the much larger neighbor to Kilauea volcano, which erupted in a residential neighborhood and destroyed 700 homes in 2018. Some of its slopes are much steeper than Kilauea's so when it erupts, its lava can flow much faster.

During a 1950 eruption, the mountain's lava traveled 15 miles to the ocean in less than three hours.