A memorial was held Monday in Idaho Falls, Idaho, for University of Idaho students who were killed. (EastIdahoNews.com via YouTube) 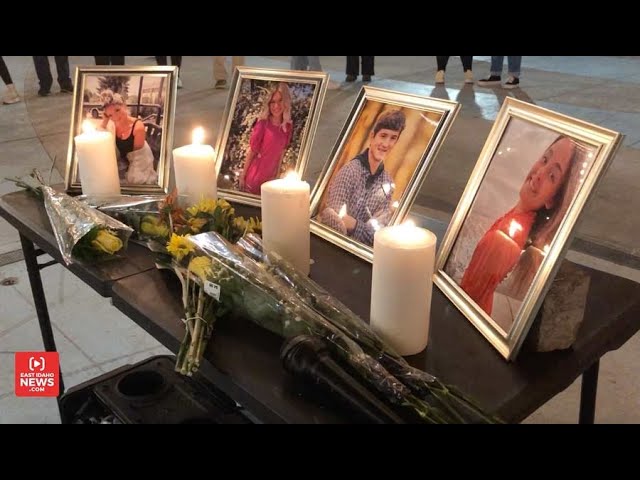 EastIdahoNews.com, YouTube: Locals remember deceased U of I students with candlelight vigil

IDAHO FALLS – Dozens gathered in the courtyard between Rib & Chop House and Smokin' Fins in downtown Idaho Falls on Monday night for a candlelight vigil in memory of the four University of Idaho students who were killed earlier this month.

Jessica Marboe Jenkins with the Idaho Falls chapter of the U of I Alumni Association helped organize the event. She is a fifth-generation Vandal and she tells EastIdahoNews.com the events of the last eight days have shaken up the Moscow campus and surrounding community.

"When you've walked the same walk that these victims walked that night, when you've gone to the same places they went to a million times, when you've literally stepped foot in the house that this happened in … it's so surreal," Jenkins says.

While holding back tears, Jenkins explained she didn't know any of the victims. But her little sister was acquainted with one of them. Kaylee Goncalves, 21, of Rathdrum was in her sister's recruitment group for a Greek sorority at the university.

Jenkins says the two of them had a special connection as a result.

"They weren't close in the years following, but she remembers her as this bubbly, energetic, charismatic (person) with a contagious laugh. (Goncalves was) a super positive girl and it's just heartbreaking to hear everyone describe her as that and to know that she's no longer with us," Jenkins explains.

The two other women who were killed were Madison Mogen, 21, of Coeur d'Alene, and Xana Kernodle, 20, of Post Falls. The three women were reportedly roommates.

When you watch a documentary about something like this, you feel sick, you feel disturbed by it. But when it happens somewhere that you've been so many times, it's awful. It's the worst feeling.

–Jessica Marboe Jenkins, U of I Alumni Association

A memorial service for Ethan Chapin, 20, of Mount Vernon, Washington, the only male victim, was held earlier Monday in his hometown. He apparently was dating Kernodle at the time of his death.

Police have not identified a suspect in the stabbing death of the students. An investigation is ongoing.

Jenkins says administrators have allowed students to return home or "whatever they feel is best" in the aftermath of the tragedy. She doesn't know when things will return to normal.

Friends and family gathered Monday to remember one of the four University of Idaho students stabbed to death in their home early Nov. 13, as police in the college town of Moscow have yet to identify a suspect in the slayings.

Several U of I chapters across the state have already held vigils for the victims and Jenkins is grateful for the show of support at the Idaho Falls event.