Canzano: Utah knocks off USC — and the Pac-12 smiles

SALT LAKE CITY — The final pass of the evening fell incomplete. USC toppled along with it. A complicated and wild Saturday night at Rice-Eccles Stadium ended with the simplest of terms, didn't it?

It was an epic performance by Utah. But one dominated early on in so many ways by the Trojans and their star quarterback, Caleb Williams. He was lethal — spinning out of the pocket, skipping around defenders like they were traffic cones, throwing one spiral haymaker after another.

Wrap your head around that as you sort through what happened on Saturday night. Utah didn't just upset the No. 7 team in the country and stay alive in the conference championship race, it survived a torrential offensive output by college football's Transfer Portal All-Star Team.

Afterward, Utes coach Kyle Whittingham was asked how in the world the Utes pulled it off. On three different occasions, Utah trailed by 14 points on the scoreboard. With seven minutes left, the Utes were down by seven and USC had the ball.

Guts, too, coach. Because when Utah scored its final TD of the night, pulling to within a single point with less than a minute left on the clock, Whittingham had already decided he was going for the win. He told offensive coordinator Andy Ludwig that they weren't playing overtime when the drive started, 75 yards earlier, down by a touchdown.

"We were going for it," Whittingham said.

Ludwig put the ball in Cam Rising's hands on the game-winning play. A run, to the left. The quarterback took the snap, tucked the ball away and followed his blockers. Rising stumbled into the end zone like a factory worker coming through the front door with his lunch pail at the end of a long day.

"Everybody blocked it up," Rising said, "so it was easy for me."

A couple of weeks ago, I asked Whittingham about Rising. What does he mean to the team? How much does Utah trust its quarterback? He told me Rising was the program's "alpha dog, without question." When Utah's coach was asked about Rising on Saturday, he doubled down. 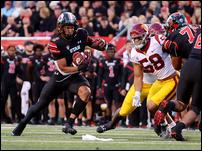 'Unwavering belief': No. 20 Utes rally to stun No. 7 Trojans in front of sold-out crowd

In winning, Utah did what four other conference teams, including Oregon State, couldn't do this season. It beat USC. We'd be foolish to ignore the baggage that comes with that feat. Before the season, the Trojans and UCLA announced they were leaving for the Big Ten Conference and a bag of money.

It threatened to splinter the conference.

Commissioner George Kliavkoff may say that the remaining members and the conference would treat the Trojans and Bruins like regular, old Pac-12 members. But they're just not. They're stowaways. No self-respecting member of the conference wants to see either UCLA or USC get to Las Vegas in December and go home with the conference-championship trophy.

When the Trojans scored in the final minute to beat Oregon State a few weeks ago, several USC players ran to the Beaver logo at midfield and performed snow angels on it. No doubt, USC would have done the same on the "UU" at midfield in Salt Lake City.

Utah's victory was celebrated by fans across the conference. Not just because it was a great win. Not because it was dramatic and gutsy. But because nobody except USC would be OK with the Trojans going undefeated in conference play.

Same goes for unbeaten UCLA, which plays at Oregon next Saturday. I doubt anyone will say it — but I'm thinking the Ducks and Utah would love nothing more than to shake hands in Las Vegas on Dec. 2, flip a coin, and let the Los Angeles schools watch the game from home.

What were the Utes playing for? Each other, of course. Their football season, certainly. Also, they wore commemorative helmets and dedicated Saturday's game to a couple of fallen teammates (Aaron Lowe and Ty Jordan).

That final pass on Saturday night came out of Caleb Williams' hand and fluttered high in the air, toward midfield. The stadium held its breath. Utah's defenders boxed out the USC receivers. The ball landed — incomplete — and Rice-Eccles Stadium shook.

But we know better, don't we?

It was 10:39 p.m. in Salt Lake City when Kyle Whittingham finished his post-game news conference. He'd celebrated with his team, slapped backs with coaches, and handed the game ball to the grieving mothers of those two lost players.

The final question of the evening came from him.

"What time is it?" Whittingham asked nobody in particular. "It seems like midnight." 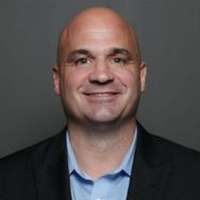