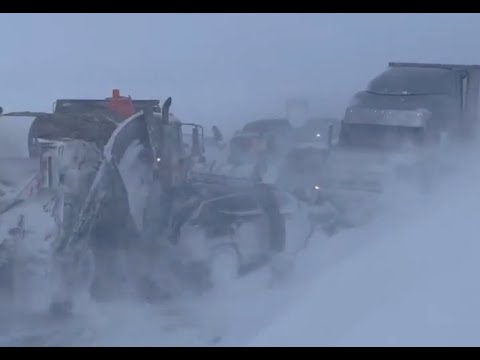 ISLAND PARK, Idaho — Idaho State Police say the massive multi-vehicle crash in Island Park on Friday was caused by a semi-truck hitting a passenger car that was stopped due to low visibility in the eastbound lane of U.S. Highway 20.

The crash occurred at about 3 p.m. just north of Island Park.

Emergency crews spent hours battling severe weather conditions, and the road was closed to the Montana state line for several hours. U.S. 20 was reopened to travelers as of 8:30 a.m. Saturday.

The chaos began around 3:30 p.m. near Henry's Lake Flats when blowing snow resulted in whiteout conditions. The Fremont County Sheriff's Office, Idaho State Police and multiple other agencies were called to the area as stranded drivers on the extremely slick highway were stuck in their vehicles.

Video and photos shared with EastIdahoNews.com show at least one semi-truck, a snowplow and many other vehicles lined up along the highway.