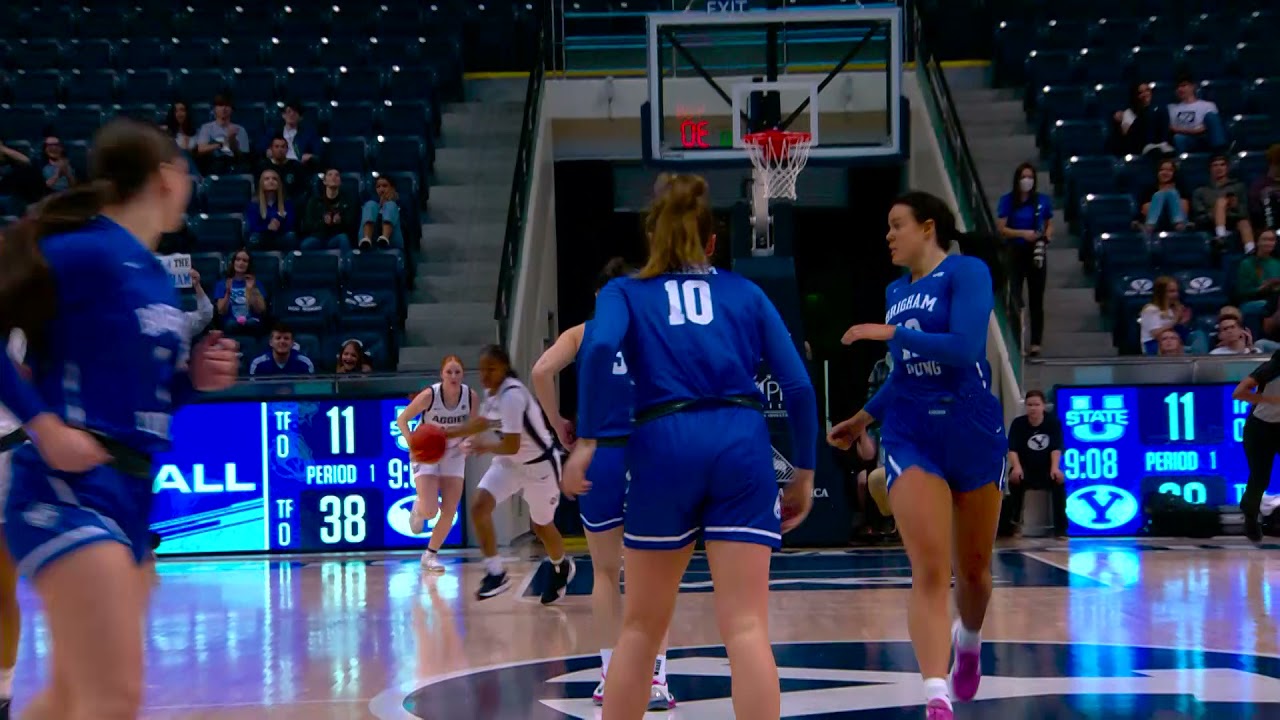 PROVO — The Cougars welcomed the Aggies to the Marriott Center Tuesday afternoon in a clash of the Utah blues. It was the fifth straight home game for the Cougars to start the season.

Shaylee Gonzales had 24 points on an efficient 8-of-12 shooting, and added seven rebounds, six assists and four steals to stuff the stat sheet in BYU's 101-74 win over Utah State — the team's highest scoring outing in a non-exhibition game since Mar. 19, 2011, when the Cougars scored 102 points against Utah State.

BYU head coach Jeff Judkins was unavailable for the game due to testing positive for COVID-19, so assistant coach Lee Cummard filled the position as the interim head coach. The university said the team has been tested and are "safe to travel with no other positive tests."

Cummard said the only concern he had while coaching was dealing with a substitution pattern. Other than the rotation of his team, his main job was to "get out of the way" and let his team play.

"Most of it is just get out of the way. They're well taught — Juddy's done a great job with them," Cummard said. "They know exactly what we're gonna do; we had a great game plan coming in that Juddy implemented before we knew any different, and they came out and were locked in from the jump."

Locked in was an understatement.

Gustin, who had 18 points on 7-of-8 shooting, scored a layup 42 seconds into the game to grab her team's first and only lead. Following her basket, the Cougars went on an 11-0 run to start the game.

The Aggies were held scoreless for almost four minutes. It wasn't until the 6:15 mark in the first quarter when Laci Hawthorne found the bottom of the net for Utah State.

Hawthorne scored 6 of her team's 11 points in the first quarter, but it was nearly impossible to keep up with the red-hot Cougars.

After 10 minutes of action, BYU, led by Gonzales' 13 and Harding and Gustin's 8 points, came to the bench up 25 after putting up 36 points in a single quarter. The team combined for 13-of-19 (4-of-7 from 3-point range) and racked up eight first-quarter assists.

Since the NCAA adjusted the format of the women's game from halves to quarters during the 2015-16 season, no BYU team in history had put up that many points in a single quarter.

"The ball was just moving offensively. With that first unit, you gotta guard everybody or else they'll make you pay, and they did today," Cummard said of his team's successful first quarter. "Not a lot of minutes for them, but highly effective in their playing time. That thing was just going through every possession it seemed like."

The starting unit averaged just over 23.5 minutes and together combined for 74 points, 18 rebounds, 22 assists and 10 steals.

As experienced as the Cougars are returning all five starters from a season ago where they advanced to the second round of the NCAA Tournament, the unbalanced game allowed for the freshmen core of Calvert, Nani Falatea, Arielle Mackey-Williams and Rose Bubakar to play valuable minutes.

Following a minute and a half of being stuck at 98 points with several attempts to hit the century mark, it was Bubakar who nailed a 3-pointer on the right wing with 40 seconds remaining in the game to break past the century mark. Bubakar finished the game with 8 points and four rebounds in 10 minutes.

With the win, the Cougars remain perfect overall and perfect at home, winning five straight in the Marriott Center.

"That's something Jud talked about all last season and he's stressed a few times already this season that we don't lose at home," Cummard said. "We were successful on it last year — had five solid opponents that came in here and we were able to fulfill that; it's a big deal."

BYU will face their toughest challenge thus far at the St. Pete Showcase in St. Petersburg, Florida, later this week when they will play two top-25 opponents: No. 17 Florida State and No. 22 West Virginia.

The road stand continues after the showcase when the Cougars will travel to Salt Lake City to take on the University of Utah, followed by Oklahoma.

"We got a stretch of five straight P5 teams, and a good test for us," Cummard said. "It'll give us a chance to see where we're at and what we need to improve on. Hopefully we'll go out there and play with confidence and have some success, though."