Hot-shooting Wildcats improve to 3-0 with win over UMass

JJ Overton had a season-high 21 points to lead five Wildcats in double figures as Weber State improved to 3-0 with an 88-73 win over UMass in the opening game of the Jersey Mike's Classic, Thursday, Nov. 18, 2021 in St. Petersburg, Fla. (Kyzer Armendariz via Weber State Athletics) 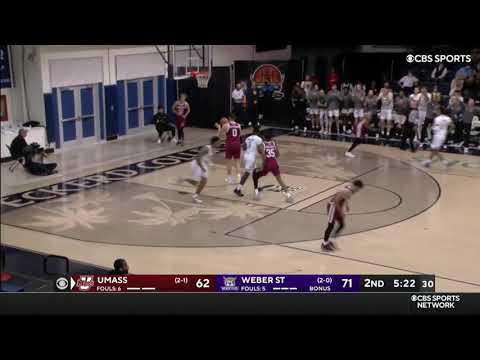 ST. PETERSBURG, Fla. — JJ Overton had a season-high 21 points to lead five Wildcats in double figures as Weber State improved to 3-0 with an 88-73 win over UMass in the opening game of the Jersey Mike's Classic on Thursday afternoon.

Koby McEwen added 19 points and also made three 3-pointers. He also had a game-high seven rebounds and dished out four assists. Dillon Jones added 15 points, Zahir Porter had 13 points and six rebounds and Cody Carlson had 11 points for the Wildcats, who are 3-0 for the first time since 2012.

"I thought we played smart and well on both ends of the floor," Weber State coach Randy Rahe said. "We guarded really well on defense and offensively, we had really good ball movement. We played great defense and rebounded well and moved the ball well. It's a really good win against a talented team."