WASHINGTON — The contagious delta variant is driving up COVID-19 hospitalizations in the Mountain West and fueling disruptive outbreaks in the North, a worrisome sign of what could be ahead this winter in the U.S.

While trends are improving in Florida, Texas and other Southern states that bore the worst of the summer surge, it's clear that delta isn't done with the United States. COVID-19 is moving north and west for the winter as people head indoors, close their windows and breathe stagnant air.

"We're going to see a lot of outbreaks in unvaccinated people that will result in serious illness, and it will be tragic," said Dr. Donald Milton of the University of Maryland School of Public Health.

In recent days, a Vermont college suspended social gatherings after a spike in cases tied to Halloween parties. Boston officials shut down an elementary school to control an outbreak. Hospitals in New Mexico and Colorado are overwhelmed.

In Michigan, the three-county metro Detroit area is again becoming a hot spot for transmissions, with one hospital system reporting nearly 400 COVID-19 patients. Mask-wearing in Michigan has declined to about 25% of people, according to a combination of surveys tracked by an influential modeling group at the University of Washington.

"Concern over COVID in general is pretty much gone, which is unfortunate," said Dr. Jennifer Morse, medical director at health departments in 20 central and northern Michigan counties. "I feel strange going into a store masked. I'm a minority. It's very different. It's just a really unusual atmosphere right now."

New Mexico is running out of intensive care beds despite the state's above-average vaccination rate. Waning immunity may be playing a role. People who were vaccinated early and have not yet received booster shots may be driving up infection numbers, even if they still have some protection from the most dire consequences of the virus.

"Delta and waning immunity — the combination of these two have set us back," said Ali Mokdad, a professor of health metrics sciences at the University of Washington. "This virus is going to stick with us for a long, long time." 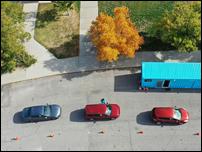 Utah is one of five Mountain West states that make up the nation's largest swath of COVID-19 hot spots, stretching from Montana to New Mexico.

The delta variant dominates infections across the U.S., accounting for more than 99% of the samples analyzed.

No state has achieved a high enough vaccination rate, even when combined with infection-induced immunity, to avoid the type of outbreaks happening now, Mokdad said.

In a deviation from national recommendations, Colorado Gov. Jared Polis signed an executive order Thursday that allows any resident 18 or older access to a COVID-19 booster shot, another step to prevent hospitals and health care workers from being overwhelmed by the state's surge in delta infections.

First shots are averaging about 300,000 per day, and the effort to vaccinate children ages 5 to 11 is off to a strong start, Zients said at a briefing Wednesday.

The closer you are to a smoker the more exposure you have to that smoke. And if you're in a poorly ventilated room, the smoke builds up over time.

–Linsey Marr, a leading researcher who says to imagine that everyone you meet is a smoker

Virginia Tech's Linsey Marr, a leading researcher on the airborne spread of the coronavirus, predicted the northward spread of the virus in a Twitter post Sept. 15. The virus spreads in the air and can build up in enclosed rooms with poor ventilation. Colder weather means more people are indoors breathing the same air, Marr said.

Imagine that everyone you spend time with is a smoker and you want to breathe as little of their smoke as possible, she said.

"The closer you are to a smoker the more exposure you have to that smoke," Marr said. "And if you're in a poorly ventilated room, the smoke builds up over time."

Marr said she and her vaccinated family will use rapid tests before gathering for Christmas to check for infection.