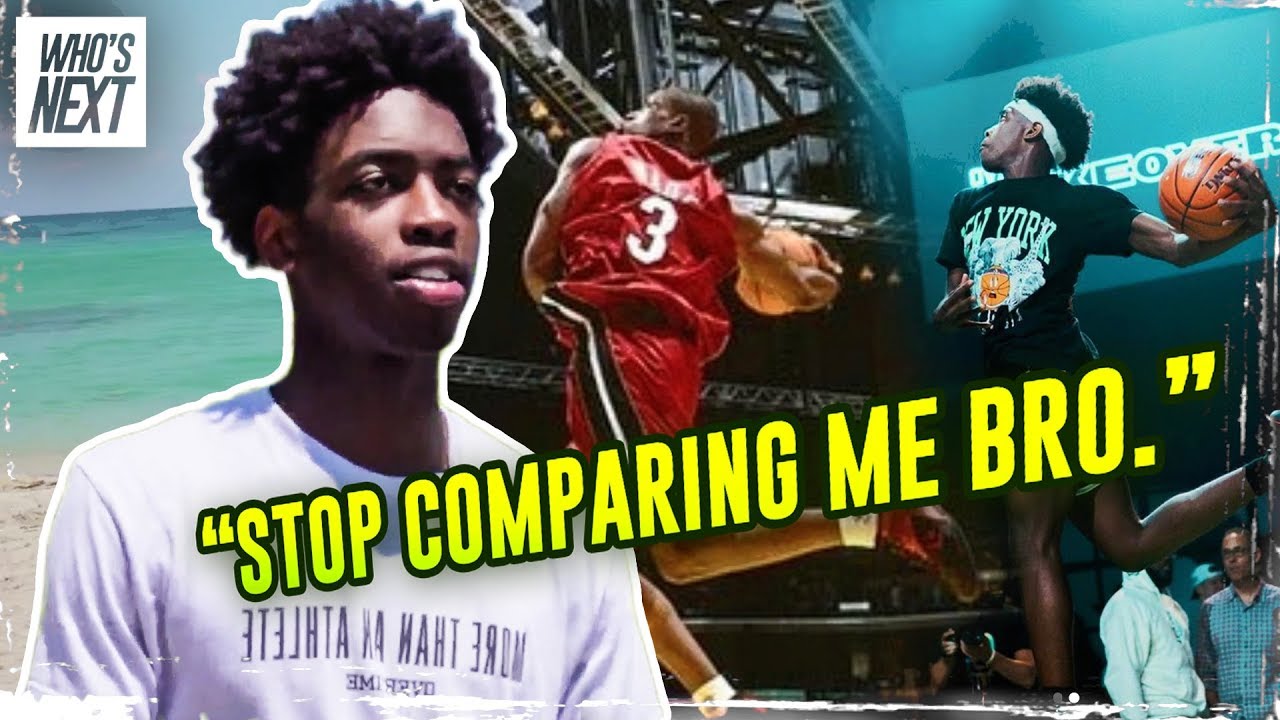 Don't Call Him Dwyane Wade's Son. Zaire Wade Opens Up On His Struggles & Making His OWN NAME!

SALT LAKE CITY — When Zaire Wade was selected 10th overall in the 2021 NBA G League draft by the Salt Lake City Stars, criticism poured out from those who believed he was only given the opportunity because of who his father is.

It could easily appear like that was the case.

His father — Dwyane Wade, D-Wade, Flash, Father Prime, however you may know him as — was drafted fifth overall in the 2003 NBA draft and went on to receive some of the highest and most recognizable awards during his 16-year career in the league.

He is a 13 time All-Star, three time NBA Champion, the 2006 Finals MVP and the 2010 All-Star Game MVP. Dwyane Wade also earned the 2009 scoring title and made multiple appearances on all-defensive and All-NBA teams.

As a minority owner of the Utah Jazz, having his son play for the affiliate team of the franchise might be a red flag and appear as the biggest form of partisanship. But a team is not going to waste a draft pick on someone just because their father owns part of the team, or draft a player because of his name and the two million followers he has on Instagram — that wouldn't make any sense.

For Zaire Wade, 19, he knows that ultimately it was his talent, athleticism, work ethic, potential and his personality that the Stars were intrigued by when they drafted him. So instead of "proving everybody else wrong," he wants to prove himself right.

"I know how hard I've worked over the past years, especially this summer, to get this, to be blessed to have this opportunity from the Stars ... ." Wade said. "I told coach (Nathan Peavy), I'm here to work hard and get better and learn every day."

Wade's path to Utah was anything but traditional.

After playing at Mount Carmel High in Chicago his freshman year and at American Heritage High in Miami during his sophomore and junior seasons, and then Sierra Canyon in California his senior year, Zaire Wade decided to transfer to Brewster Academy and reclassified to the 2021 class.

With options of going the college route after his time at Brewster — he received offers from Rhode Island, South Carolina, DePaul and Toledo, according to 247Sports — it was announced in October he wouldn't be playing college basketball at all; instead, he was going the pro route.

There are both pros and cons to skipping the traditional college route — the path worked for Jalen Green, who was drafted No. 2 overall in the 2021 draft by the Houston Rockets and Jonathan Kuminga who was drafted No. 7 overall by the Golden State Warriors. Green and Kuminga initially entered the NBA's G League and played for the lone team unaffiliated with an NBA team: G League Ignite.

As a player, being immersed in an immediate professional experience is what Salt Lake City Stars head coach Nathan Peavy said is most valuable for athletes deciding to go the G League route. It's what Peavy said he's excited about for Wade to experience.

"You're coming right in as a very, very young player; you're able to get the pro experience right away — be able to be around vets and guys that have played in the G League or played four, five years of college. I think that's very valuable," Peavy said. "It's gonna be a quick learning experience where you're going to be forced to really grow and to really immerse yourself into the culture of pro basketball.

"It helps young players like Zaire be able to develop quickly — develop quicker than others — and I'm hoping and I'm expecting to see that from him."

The physicality and speed of the game are two aspects Wade says he has had to quickly adjust to in the short time he has been with the team. As a 6-foot-3, 170-pound guard, one of the individual goals he set for himself for the upcoming season is to get stronger and compete with the bigger bodies.

"It's not like I'm weak; I could definitely hold my own and things like that," Wade said. "But as you know, the guys out here are definitely big and beefy, so just being able to bump with everybody, that's really my biggest goal for myself this season."

As for personal statistical goals, he has none.

The only statistical goal he has as a focus is how many wins his team has at the end of the season. He wants to play an active role in creating a winning culture and is focused on being the best teammate.

"I'm always happy for my brothers' successes — there should be no competition when it comes to anything with teammates," Wade said. "I feel like my guy's doing good, I'm going good; he's not doing good, I'm not doing good. So we look out for one another; that's who I am as a person."

The G League is unique in that each team is made up of two-way players, affiliate players, returning players, local tryout players and players selected from draft picks — all with the same goal of making it to the NBA. But to actually get to the highest level, to get looked at and to even be considered for a spot on a team, the team needs to win and player needs to produce at that level.

"We all want to get to the NBA, and if not, you wouldn't be here. But at the end of the day, we all know that to get to the NBA, essentially you have to win games and produce, so we have to come together; we have to all perform," Wade said. "Hey, I want to see all 15 — however many guys we have on our team — all in the NBA. So I think that's the difference between us, that we actually enjoy rooting for each others' success. It doesn't matter who goes first or anything like that."

Wade will be eligible for the 2022 NBA draft, but until then he will be spent "refining" and "polishing" his game.

"He has tools where for a 19 year old and some change, he has a pretty good basketball IQ for this level," Peavy said. "So it's about refining that; it's about polishing up his game and seeing him contribute to this team little by little and really growing himself as a person and a player this year."

The 2020-21 NBA season saw a record high 45% of players who had NBA G League experience on opening day rosters, which gives value to the G League. Utah Jazz center Rudy Gobert is proof that generational talent can come from and develop in the G League.

It will only be a matter of time before fans see whether the process and time spent in the G League will pay off for Wade.