Utah State wide receiver Savon Scarver carries the ball during the second half of an NCAA college football game against Washington State, Sept. 4, 2021, in Pullman, Wash. The Aggies dropped their first game of the season, 27-3 to Boise State. (Young Kwak, Associated Press) 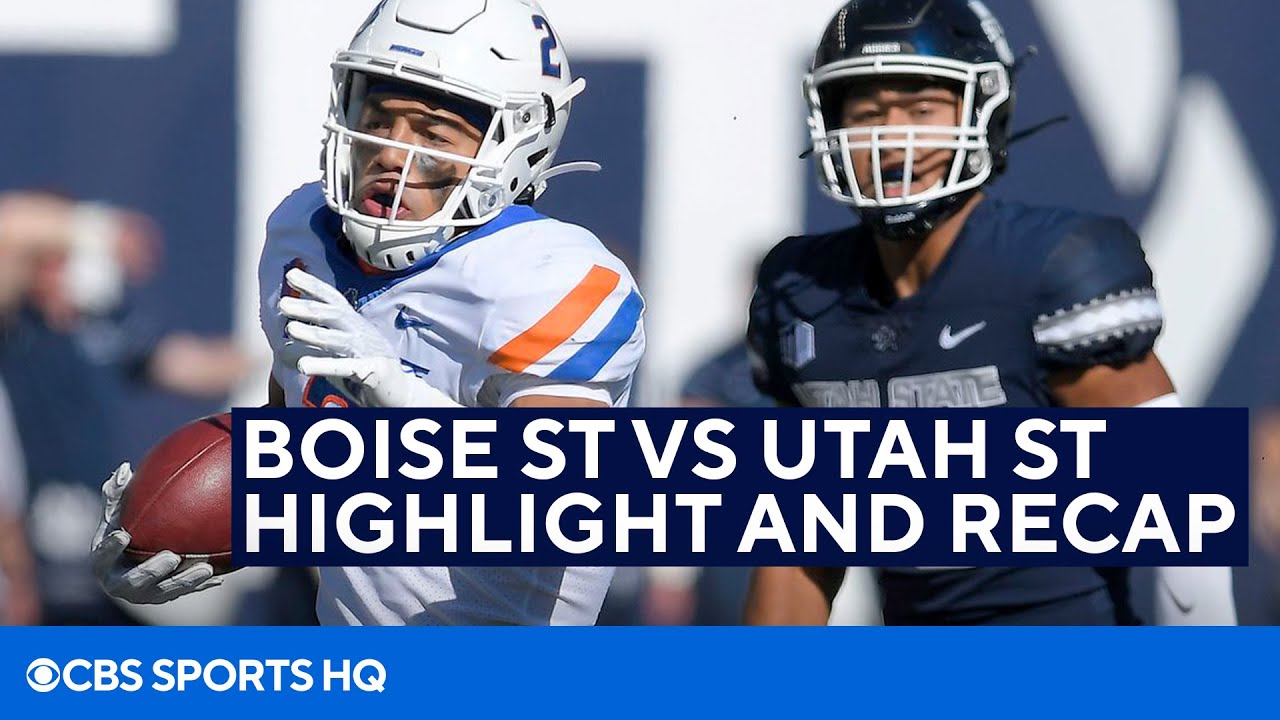 LOGAN — With the sun shining and the temperatures hovering around 70 degrees, it was a pristine fall Saturday morning when Utah State kicked off Week 4 of the college football season. CBS was producing the first nationally televised home game on network television in Utah State history, and a near-sellout crowd at Maverik Stadium was eager to watch their undefeated Aggies take on conference rival Boise State.

But the 23,715 Utah State faithful were given little to cheer.

The Aggie's fast-paced offense failed to find the end zone, and Boise State marched to a 27-3 win — the Broncos' biggest win of the year and a statement victory for a team that made it clear that a Mountain West title still goes through them.

For the Aggies, it was a disheartening result. They appeared to have the speed and physicality to match Boise State — and actually out gained them 443 yards to 435 — but couldn't get out of their own way.

Utah State (3-1, 0-1 Mountain West) finished with five turnovers, two of which occurred deep in their own territory. The Aggies committed 13 penalties for 85 yards, and the offense sputtered in the red zone, scoring on just one of four trips inside the 20.

"Obviously disappointed in the way we played," Utah State coach Blake Anderson said. "I thought the energy level was really good but the execution was poor. The offense was as bad as we've executed this season. We had yards but couldn't finish in the red zone, and just seemed like we had every little off-schedule type issue."

Both quarterbacks, Logan Bonner and Andrew Peasley, had substantial playing time, perhaps in an effort to energize the offense. But the dual quarterback system seemed to make the offense even more out of sync. Bonner would finish the day 11-of-25 for 173 passing yards, and Peasley, who played the majority of the second half, completed 2-of-6 passes for 35 yards.

What worked at Air Force — specifically third-down conversions and slants up the middle — didn't work against the Broncos. They finished just 6-of-17 on third-down attempts, and failed to get the ball in the hands of their top receivers, Thompkins and Bowlings, consistently.

There was better success on the ground. The Aggies finished with 235 rushing yards — including 126 from Calvin Tyler Jr. But the run game alone wasn't enough to keep the chains moving.

"Lots of penalties today, some miscues between quarterbacks and wide outs, protection issues, it wasn't any one particular thing," Anderson said. "We just kind of fell apart. Give (Boise State) credit, they have a good defense. Felt like physically they were the best defense we've played since week one, and at times they exposed us."

The Aggie defense played considerably better than the offense, and kept the game from getting out of reach for three quarters.

For a moment, they even gave the team life. With 1:57 left in the third quarter, cornerback Ajani Carter picked off Boise State quarterback Hank Bachmeier at the 12 yard line. Backed by a 41-yard run from John Gentry, the Aggies were able to muster a field goal to start the fourth quarter and pull within 17-3.

But the Broncos offense responded with an eight-play, 60-yard drive to kick a field goal and end the comeback bid.

Bachmeier would finish the day with an efficient 22-of-37 passing for 287 yards. The Aggie defense did manage to get him off the field at times, forcing five punts, a turnover on downs, and a missed field goal. Linebacker Justin Rice would again lead the way with 10 tackles, and linebacker AJ Vongphachahn added nine.

"Got to be proud of the defense," Anderson said. "They just held in there, kept us in it and gave us a chance, way longer than probably we deserved today with just how poorly we executed."

There seemed to be self-inflicted wounds on every drive in the first half for the Aggies, which kept them off the scoreboard. The first drive of the game, Bonner threw it to an open Justin McGriff up the middle, but the pass sailed high, bounced of McGriff's fingertips, and was picked by Boise State.

The second drive of the game, running back Elelyon Noa had a 34 yard run deep into Boise State territory. But a holding call by Demytrick Ali'ifua pushed the Aggies back, and a deep field goal attempt from Connor Coles was blocked.

In the second quarter, an interception at the goal line by Bonner, and another missed field goal from Coles, kept the Aggies scoreless despite gaining 317 yards.

The Broncos, who scored a touchdown following a 69-yard pass from Bachmeier to Khalil Shakir, would take a 10-0 lead into the half.

To start the second half, the Aggie offense looked lethargic, and had to punt away the ball.But in an effort to reenergize the team, they decided to fake a punt. But Stephen Kotstanlee and the special teams were snuffed out by the Broncos snuffed it out, who received the ball at the Utah State 18 yard-line. A few plays later, Bachmeier found Shakir for a touchdown to make it 17-0.

"The fake punt's my fault," Anderson said. "At this point we've had zero momentum. We did not execute it well. It still may not have worked, but it was a calculated risk. But at the point, the way the game was going, we tried to create a play."

The following two drives for the Aggies resulted in punts. Another turnover in the 4th quarter, a fumble by Peasley that gave the Broncos the ball at the Utah State 15-yard line, all by ending hopes for a comeback.

"We just didn't play very well," Anderson reiterated. "We played like a bad football team and got exposed against a good football team, so we got to get back to work."

The Aggies now turn their attention to BYU, the in-state rivals which they host next Friday in Logan.