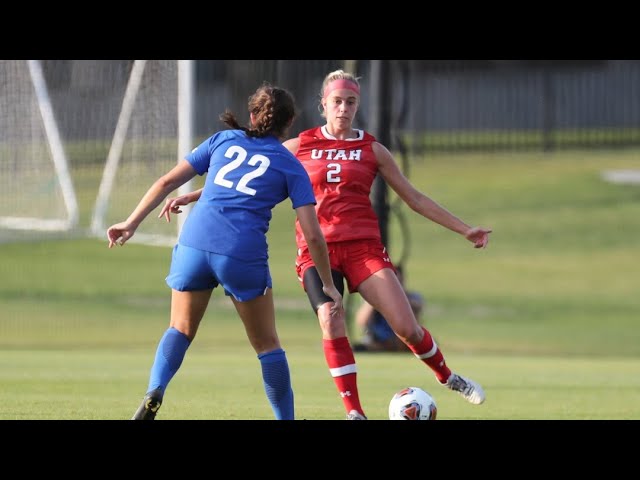 Utah women’s soccer fights to a 0-0 draw in double-overtime vs. rival No. 22 BYU

SALT LAKE CITY — The first rivalry contest of the week between BYU and Utah played to a draw.

It was the first draw of the year for both sides, and the second result against a Pac-12 opponent for BYU (3-2-1), which also took a 2-1 win over USC in Provo.

Utah moved to 3-3-1 on the year, its third result in four matches sandwiched around a 2-1 loss at Butler Sunday. BYU improved to 24-7-3 all-time against Utah, including a seven-match unbeaten streak with five wins and two ties.

"I was proud of the energy, effort and the game plan that the players executed tonight against Brigham Young," Utah first-year coach Hideki Nakada said. "We had three days to prepare for this rivalry contest against the No. 22 team in the country, but the players did a great job at staying true to what we want to accomplish."

Brecken Mozingo had four shots, and Kendell Peterson had three as the Cougars out-shot Utah 18-9.

But the Utes were more clinical in the final third, holding BYU to just three shots on goal while taking four of their own.

BYU out-shot the Utes 8-1 in the first half, but neither goalkeeper was challenged as the hosts held the 22nd-ranked visitors without a shot on goal through halftime.

The Cougars pushed forward three times to the corner flag and were called offside twice in the scoreless first half.

Mikayla Colohan had the Cougars' first clean look at goal, finishing a counter-attacking shot towards the bottom of the net before Peterson made the first save of the match in the 53rd minute.

Brooklyn James had the Utes' first key chance of the match, but Smith came off her line to make the save and keep the match scoreless in the 70th minute.

Utah's Sidney Roberts let an attempt fly off a failed clearance, but Smith tipped her shot into the crossbar to keep the match level in the 82nd minute.

But Smith went off with an injury just a few minutes later and Empey was pressed into action for the Cougars.

BYU out-shot the Utes 14-7 through a scoreless regulation, but Utah held a 3-1 edge in shots on goal.

"The nice thing about this program and this group that we have is that we're more than good enough to be competitive in every match; I don't care who we play," Nakada said recently on a podcast from Utah Athletics. "It's up to me, it's up to our staff, to prepare this team to get the job done."

BYU returns to Provo to host Missouri on Saturday at South Field. Kickoff is scheduled for 6 p.m. MT.

Utah Valley men's soccer played to a scoreless draw on the shores of Lake Michigan, out-shooting Northwestern 8-7 en route to a 0-0 final.

Joseph Wheelwright made one save to earn the shutout for Utah Valley, who improved to 2-0-2 in head coach Kyle Beckerman's first season.

The Wolverines will play at Bradley on Sunday night before wrapping up nonconference play at home Thursday against Washington.