Locals in the NFL: Tyler Huntley goes off in Ravens' preseason finale 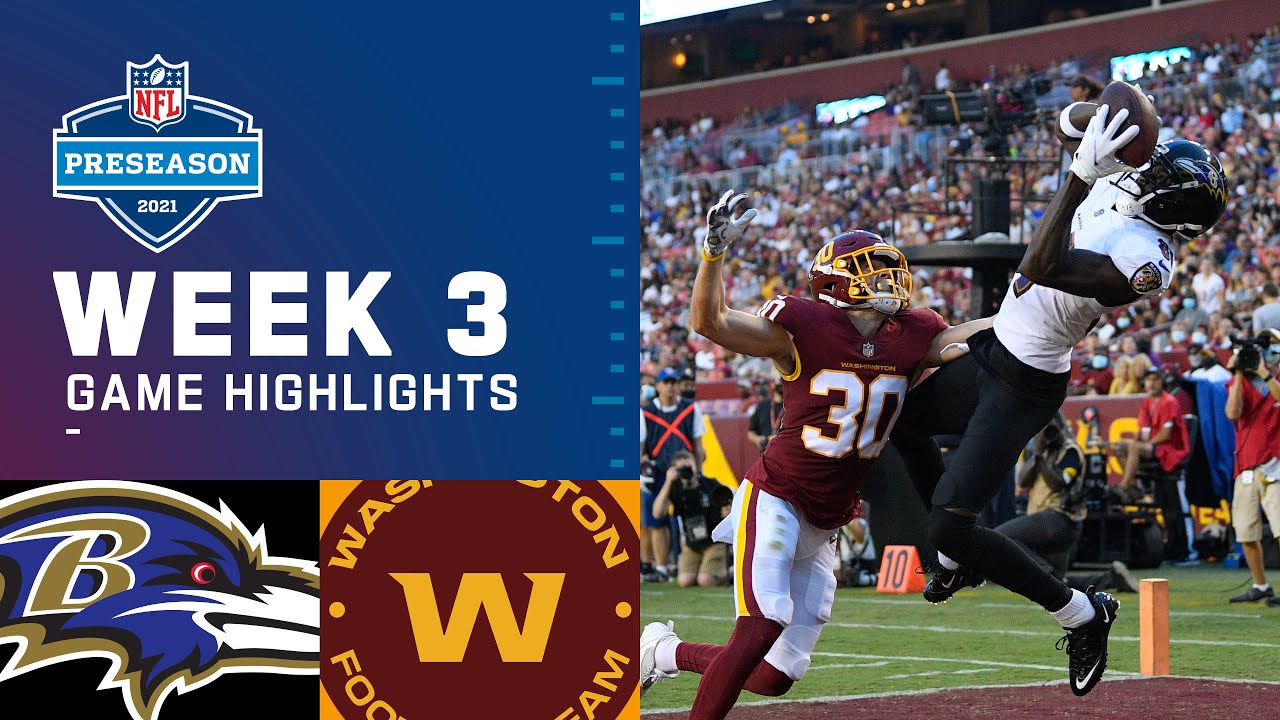 AROUND THE SHIELD — Former Utah quarterback Tyler Huntley went from undrafted free agent to practice squad — and he's now on the verge of securing his spot as Lamar Jackson's full-time backup in Baltimore.

Huntley ran wild during a brilliant display in the Ravens' 37-3 win over the Washington Football Team to cap the preseason Saturday night, throwing for 285 yards and four touchdowns and running for another score in Baltimore's win.

And he again earned a ringing endorsement from the Baltimore starter and NFL Most Valuable Player of 2019.

"Glad I'm not playing against him," Jackson said. "I was cheering like a cheerleader. I just didn't have pom poms."

Huntley didn't start as Jackson made his first appearance of the preseason as the Ravens' starter. But the Utah graduate entered the game midway through the first quarter and put on a show.

Huntley opened the scoring on a 10-yard run with 1:10 left in the first quarter, and the Ravens were off and running. He then completed touchdown strikes of eight, 25, 20 and 10 yards to Tomlinson, Victor, Proche and Wallace, respectively, to finish with his breakout day.

Yes, it's only the preseason, but with the NFL's deadline of Tuesday for team's to submit their final 53-man roster, Huntley left a lasting impression on the Ravens' camp.

It's been a long two years for Huntley, the second-year pro out of Florida's Hallandale High who made the most of each opportunity, including the most recent.

"I was cheering like a cheerleader." 🤣🤣@LJ_Era8 on watching @_SNOOP1. pic.twitter.com/yce9qa0Guj

"It just feels good," Huntley said. "The long camp; I think we've been in camp for like six weeks. It felt good to end on a good note and get ready for the regular season. It gave us a good amount of momentum to get ready for the Raiders on Monday night."

Huntley threw off play-action, in the pocket, and commanded the offense like a savvy vet, completing 24-of-33 passes and finishing with a game-high quarterback rating of 138.3. He looked like a seasoned pro in his second season in John Harbaugh's offense.

"I feel like I'm comfortable in it, just because it's good to get in the game — more than just practice," Huntley said. "Getting those reps in the game gives you the comfort that you need."

"I still had some mess-ups," he added. "I feel like I could've played way better in these last few games. But just stacking was the main goal; keep stacking and getting better. We've got a lot of work to go."

The Ravens open the 2021 NFL regular season on Monday Night Football against the Las Vegas Raiders. Before then — by Tuesday — they'll have to submit their final round of cuts to establish the 53-man roster by Tuesday.

And Huntley figures to be part of it.

Former BYU running back Ty'Son Williams came off the bench and ran for 42 yards on four carries for the Ravens, and former Utah State wide receiver Siaosi Mariner played eight snaps on offense and seven on special teams for Baltimore.

Here's how other former local high school and college football standouts fared in the final tune-up of the NFL preseason.

The Saints' preseason finale with Arizona was canceled due to inclement weather caused by Hurricane Ida in the New Orleans area.

But Saints head coach Sean Payton will name Jameis Winston as the starting quarterback over former BYU star Taysom Hill, according to the Associated Press.

The decision, which was first reported by ESPN, means Winston is set to start his first regular season game since the end of the 2019 season with Tampa Bay. Winston returned to New Orleans on a one-year contract worth a base of $5 million plus incentives worth an additional $7 million and an opportunity to compete for an open starting job.

Utah all-time leading rusher Zack Moss ran for 10 yards on four carries as the Bills shutout the Packers in their preseason finale.

Bingham High product Star Lotulelei started at defensive tackle and made one stop in 12 snaps for the Bills, who did not activate former Weber State defensive back Taron Johnson. American Fork grad Jordan Devey played 17 snaps at center for Buffalo.

Utah State's Jordan Lovestarted at quarterback for the Packers and completed 12-of-18 passes for 149 yards with a sack taken and an interception in 38 snaps.

Former Bingham High defensive end Jay Tufele made one tackle in the Jaguars' win over the Cowboys.

Brighton alum Simi Fehoko started and caught three passes for 21 yards, and former Utah defensive end Bradlee Anae started and made two tackles on defense and another on special teams.

Former Brighton High and Utah linebacker Cody Barton made five tackles, including a 12-yard sack, to go along with a quarterback hurry and a forced fumble in the Seahawks' win over the Chargers.

Utah State's Bobby Wagner did not play in the preseason finale for the Seahawks, nor did BYU alum Michael Davis for the Chargers.

Former Utah wide receiver Tim Patrick was targeted twice but did not record a catch in the Broncos' win over the Rams.

Westlake High alum and Utah tackle Garret Bolles played 10 snaps on offense and one on special teams for Denver.

Orem High product Matt Gay, who played soccer at UVU and kicked for Utah, made field goals of 23, 54, 30 and 23 yards to account for all of the Rams' scoring.

Former BYU cornerback Chris Wilcox made two tackles in the Buccaneers' win over the Texans.

Former BYU lineman Chandon Herring rotated in on 52 snaps at guard and four more on special teams for Tennessee.

Layton High product Marcus Kemp caught three passes for 41 yards, including a 23-yard touchdown from Shane Buechele in the Chiefs' win over the Vikings.

Former BYU and Corner Canyon quarterbackZach Wilson did not play in the Jets' preseason finale, a tie with the Eagles.

Former Utah defensive back Javelin Guidry played 29 snaps on defense and six on special teams for the Jets.

Former Weber State lineman Sua Opeta, who prepped at Stansbury, started and played 29 snaps at right guard for the Eagles, while also rotating in for five snaps on special teams.

Former Bountiful High and BYU standout Brady Christensen played 20 snaps at tackle and seven more on special teams in the Panthers' win over the Steelers.

Former SUU safety Miles Killebrew started at linebacker and made a team-high six tackles for the Steelers in 41 defensive snaps.

Former BYU linebacker Isaiah Kaufusi started and collected a team-high nine tackles and a pass breakup while playing 51 defensive snaps of the Colts' win over the Lions.

Weber State's Andrew Vollert played one snap at tight end and added six on special teams for the Colts.

Former Layton High safety Julian Blackmon did not play in the Colts' preseason finale. Former Utah lineman Sam Tevi played 25 snaps at tackle before leaving the game with an ACL and MCL injury that will keep him out for the season, Colts officials later announced.

BYU all-time leading rusher Jamaal Williams did not play for the Lions.

Former Utah cornerback Eric Rowe did not play for the Dolphins.

Former BYU linebacker Fred Warner started and played sparingly as the 49ers wrapped up the preseason with a win over the Raiders.

Former BYU linebacker Harvey Langi racked up a game-high seven tackles to lift the Patriots past the Giants.

Langi stuffed the stat sheet again a week after posting five tackles, a sack, an interception and a pass breakup against the Eagles. The Bingham High graduate has put himself in position to make the 53-man roster in New England just two years removed from a devastating car accident that nearly killed him and his wife Cassidy outside Boston.

Former Utah running back Devontae Booker ran for 14 yards on seven carries for the Giants, while running behind an offensive line that included Brighton High product Jackson Barton at tackle.

Former Utah cornerback Brian Allen made three tackles on defense and assisted on another on special teams for the Browns, who got one tackle from former Salem Hills quarterback Porter Gustin.

Former BYU linebacker Sione Takitaki did not play for Cleveland.

Former BYU defensive tackle Zac Dawe, a Pleasant Grove alumnus, made one tackle and added a quarterback hurry in the Falcons' loss.