Politico co-congressional bureau chief Burgess Everett watches as Senate Majority Leader Chuck Schumer of N.Y. walks off the Senate floor and pumps his fists as the Senate approves a $1 trillion bipartisan infrastructure bill, sending a cornerstone of the Biden agenda to the House, on Capitol Hill in Washington, Tuesday. (Andrew Harnik, Associated Press)

The bipartisan $1 trillion infrastructure bill, which the 100-member chamber passed in a 69-30 vote, could provide the nation's biggest investment in decades in roads, bridges, airports and waterways.

U.S. stocks headed to fresh records on the news.

With a razor-thin majority in the Senate, Democrats pivoted quickly to a budget resolution containing spending instructions for the multi-trillion-dollar follow-up package. They plan to push the package through over the next few months, using a process called "budget reconciliation," which bypasses the chamber's normal rules requiring 60 votes to pass most legislation.

House of Representatives Speaker Nancy Pelosi has repeatedly said that her chamber will not take up the infrastructure bill or spending package until both are delivered, which will require the Democratic leadership to hold its narrow majorities in Congress together to get the legislation to Biden's desk.

"Today we move this country in a very different direction" with a budget plan that will "ask the wealthiest people in our country to start paying their fair share of taxes," Senate Budget Committee Chairman Bernie Sanders, one of the Senate's most liberal members, said on Tuesday as debate began.

Sen. Lindsey Graham, the top Republican on the budget committee, railed against the spending plan, saying it would fuel inflation, lead to higher taxes and energy costs on working Americans and open the border to more illegal immigration. 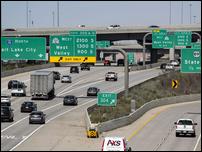 Utah's two Republican senators continue to make their cases for and against the massive bipartisan infrastructure and jobs package as a final vote looms in the Senate Monday night or Tuesday morning.

"In 2022, this idea will be on the ballot, and my goal and my Republican colleagues' is to fight like hell," Graham said, referring to next year's contests that will determine control of Congress.

The Senate on Tuesday began a "vote-a-rama," a process that gives senators the opportunity to propose amendments to the budget resolution. Debate can run for days unless party leaders agree to a shorter period.

House Majority Leader Steny Hoyer, a Democrat, said the House would return Aug. 23 to consider the budget resolution, if the Senate passes it.

Polls show the drive to upgrade America's infrastructure, hammered out over months by senators from both parties, is broadly popular with the public. The bill includes $550 billion in new spending, as well as $450 billion in previously approved infrastructure investment.

Biden praised the infrastructure bill in remarks at the White House, saying the planned investments would "allow us to out-compete the rest of the world."

Treasury Secretary Janet Yellen endorsed the idea of a follow-up package, saying the $1 trillion infrastructure plan should have a sequel.

"Indeed, our work isn't done here ... Because if we truly want to build a stronger economy, we must invest not just in infrastructure, but in other public goods like childcare, education, and affordable housing," she said in a statement.

A day earlier Yellen had urged Congress to raise the national debt limit, warning of economic harm if the debt ceiling is not raised or suspended before the nation's borrowing capability is exhausted in October.

Some Republicans have balked at the prospect, but failure to increase or suspend the statutory debt limit — now at $28.5 trillion — could trigger another federal government shutdown or a debt default.

The nonpartisan Congressional Budget Office last week said the infrastructure bill would increase federal budget deficits by $256 billion over 10 years. The assessment was rejected by negotiators who said the CBO was undercounting how much revenue it would generate.

Senate Minority Leader Mitch McConnell, who voted for the $1 trillion infrastructure bill, signaled that Republicans would use the vote-a-rama to erode support from moderate Democrats for what he called a "radical" larger spending plan. He said the plan would create a permanent welfare state and usher in the largest peacetime tax hike in U.S. history.

Once the budget resolution is adopted, Democrats will begin crafting the reconciliation package for a vote on passage after they return from their summer break in September.

The budget plan would provide various Senate committees with top-line spending levels for a wide range of federal initiatives, including helping the elderly get home healthcare and more families afford early childhood education.