Ariarne Titmus of Australia, right, leaves the pool after winning the final of the women's 400-meters freestyle as Katie Ledecky of the United States watches at the 2020 Summer Olympics, Monday, July 26, 2021, in Tokyo, Japan. (Martin Meissner, Associated Press) 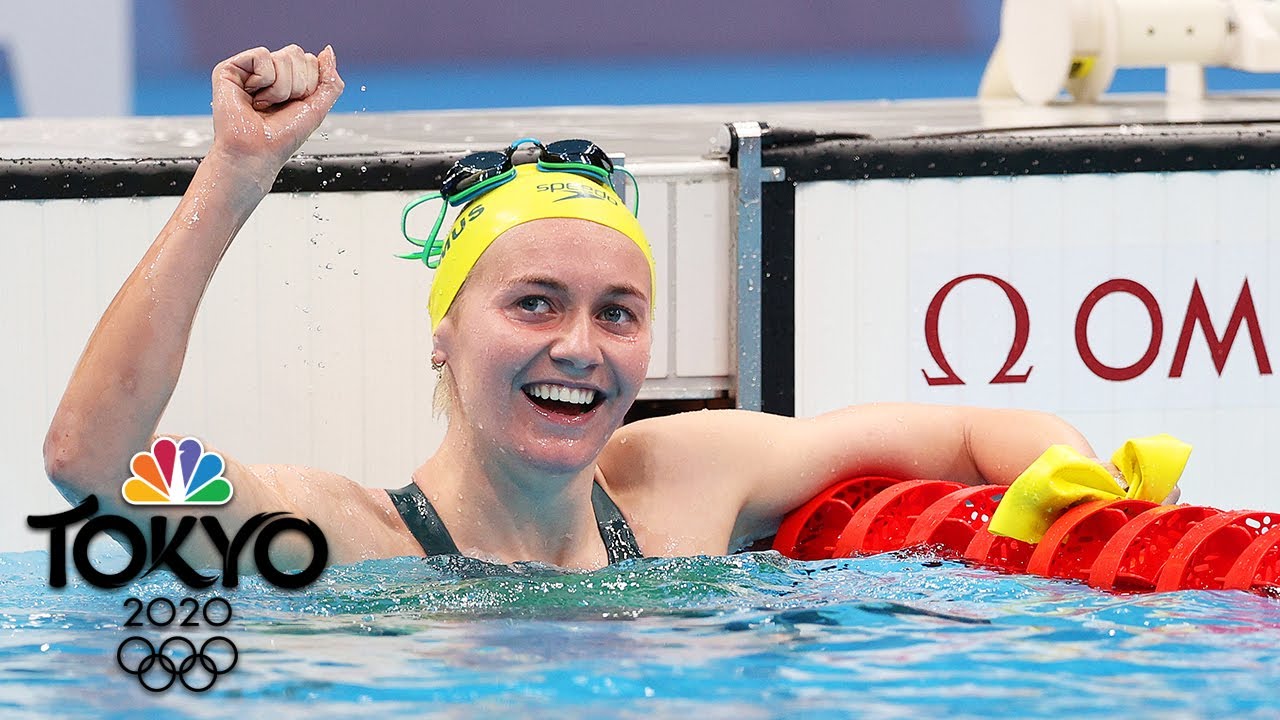 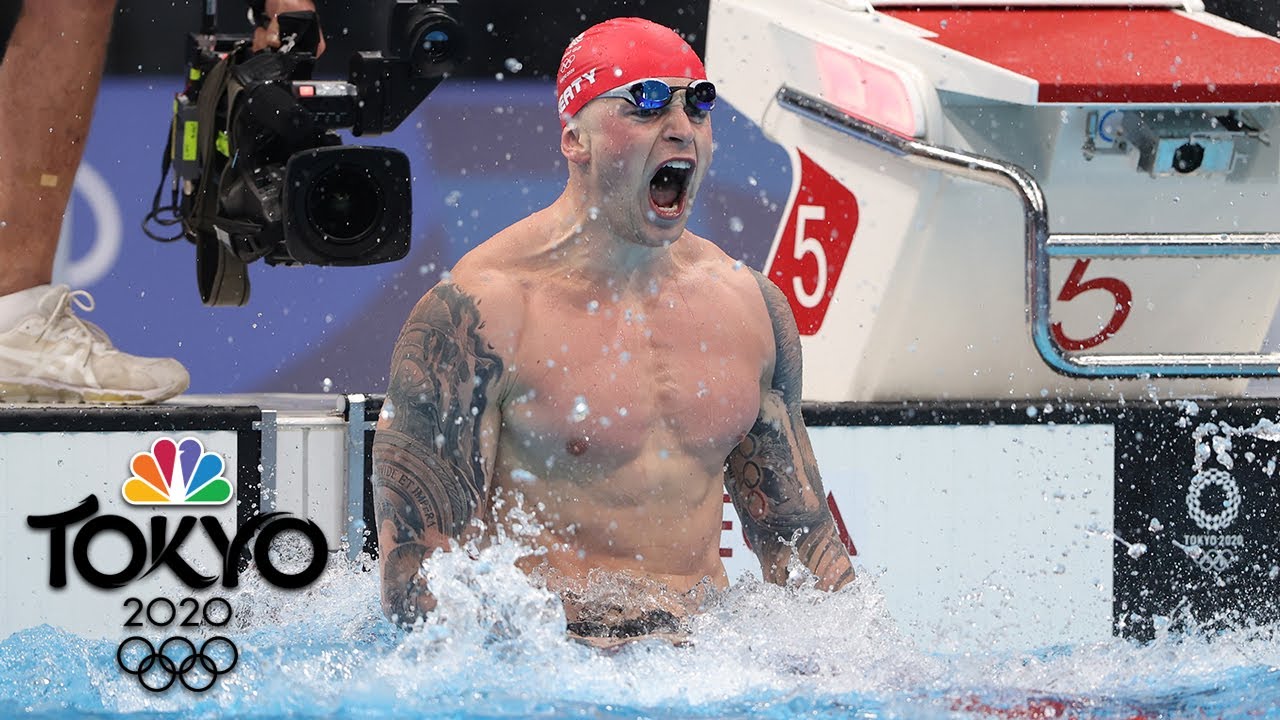 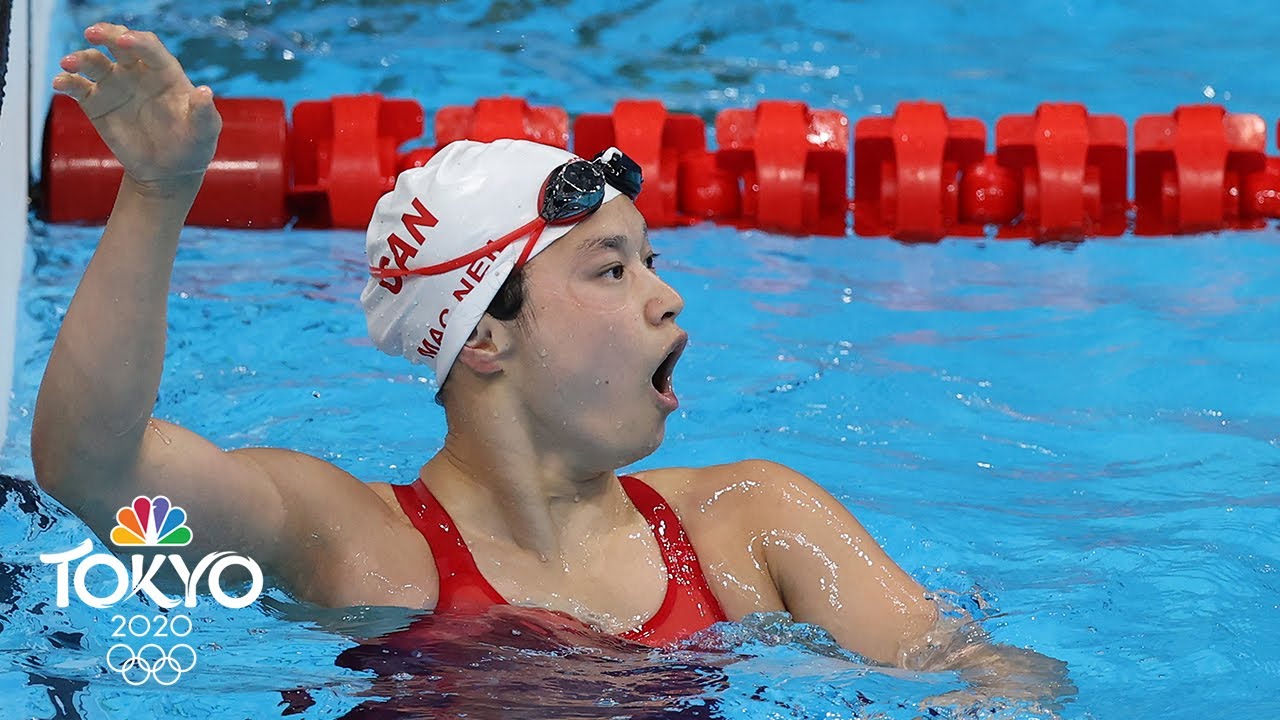 TOKYO — Caeleb Dressel got started on his quest for six gold medals in swimming Monday, while Katie Ledecky found herself in a very unusual position.

Dressel led off an American victory in the men's 4x100-meter freestyle relay at the Tokyo Olympics, easing a bit of the U.S. sting from Ledecky's first Olympic loss.

Australia's Ariarne Titmus — nicknamed the "Terminator" — lived up to her billing when she chased down Ledecky in the 400 freestyle to win one of the most anticipated races of the Summer Games.

Titmus, who trailed by nearly a full body-length at the halfway mark of the eight-lap race, turned on the speed to touch in 3 minutes, 56.69 seconds. It was the second-fastest time in history.

Ledecky was the defending Olympic champion and world-record holder. She settled for the silver this time in 3:57.36 -- the fourth-fastest time ever recorded.

"I fought tooth and nail," Ledecky said. "She definitely swam a really smart race. She was really controlled up front. I felt pretty smooth and strong going out and flipped at the 300 and it was like, 'Oh, she's right there.'"

And then she was gone.

For the first time in her brilliant Olympic career, Ledecky felt the sting of defeat, dished out by a rival from Down Under who made it clear she was not intimidated by the American star.

"It's surreal," Titmus said. "Crazy when you make this massive plan for something. It's probably the biggest thing you could pull off in your sporting career, so I'm over the moon."

Australia's Ariarne Titmus wins the Olympic gold medal in the women's 400m free.@KatieLedecky gets the silver, earning her first Olympic medal of these #TokyoOlympics.

Then the spotlight shifted to Dressel, who has been hailed as the successor to Michael Phelps.

Dressel gave the U.S. the lead, and the men never relinquished it in the relay. He swam the first leg in a blistering 47.26. Blake Pieroni and Bowe Becker kept the Americans out front before Zach Apple turned in an anchor leg of 46.69 to leave no doubt at the end.

Apple climbed from the pool to an embrace from Dressel, who is set for a grueling schedule of three individual events and three relays in Tokyo.

One down, five to go.

Ledecky's disappointment was a downer for the Americans, who won six of 12 medals on Sunday but were shut out of the medals in the first two finals Monday.

Torri Huske and Michael Andrew just missed out with fourth-place finishes, then it was Ledecky settling for the second spot on the podium — a very unfamiliar place for perhaps the greatest women's freestyle swimmer in history.

Ledecky lost an individual Olympic final for the first time after winning the 800 free at the 2012 London Games, then capturing three more golds in the 200, 400 and 800 free at Rio de Janeiro five years ago.

Titmus was every bit the Terminator at the end.

"Honestly, at the 200 I was a little bit worried," the Aussie said. "I knew she would be there. No one is going to come to the Olympics and catch a Katie Ledecky unprepared. I guess I just had to trust myself.

"I tried to stay as composed as I could and use the easy speed that I have. And to pull it off in the back end against someone who has an amazing second half of her race, I'm really proud of that. "

Ledecky will get another crack at Titmus in the 200 free, and the American is heavily favored to repeat in the 800 and add another gold in the 1,500 — a new event for the women at these games.

After racing each other right in the middle of the pool, the swimmers clasped hands when it was over.

They climbed out of the pool together, giving each other a hug.

"I just thanked her," Titmus said. "I wouldn't be here without her. She's set this standard for middle-distance freestyle. If I didn't have someone like her to chase I definitely wouldn't be swimming the way I am."

Perhaps the surest bet at the pool, Britain's Adam Peaty repeated as Olympic champion in the men's 100 breaststroke.

Peaty was the world-record holder and the first man to break both 58 and 57 seconds in his signature event. He posted the fifth-fastest time in history (57.37) to blow away the field.

Arno Kamminga of the Netherlands claimed the silver in 58.00, while the bronze went to Italy's Nicolo Martinenghi in 58.33. Andrew was next in 58.84.

Maggie MacNeil captured Canada's first gold medal at the pool with a victory in the women's 100 butterfly.

The reigning world champion touched first in 55.59, edging out Zhang Yufei of China (55.64) for the top spot. Emma McKeon of Australia took the bronze in 55.72, beating the 18-year-old Huske by one-hundredth of a second.

Huske went out fast, as is her style, and appeared to be close to the front with about 10 meters to go. But she faded on her final strokes and just missed a spot on the podium.