SALT LAKE CITY — The National Weather Service on Saturday issued multiple flash flood warnings across southern Utah that will remain into effect through the night as a result of storms in the area.

Earlier in the day, the southern communities of Bryce Canyon, Cannonville, Glendale, Hildale, Tropic and San Juan County between Monticello and Blanding were also under flash flood warnings. Weather service radar indicated at 2:34 p.m. that 1.75 to 2.5 inches of rain had fallen in western Kane County, which likely will produce flash flooding near U.S. Highway 89.

💧 This afternoon's monsoonal thunderstorm brought another 0.6" inches of rain to the park, adding to yesterday's rainfall and Thursday's record daily rainfall of 1.53". Around 3.45" of rain has fallen this month, mostly in the last 2 weeks.⬇️ pic.twitter.com/MMaUMfzwnl

A flash flood watch also remains in effect for parts of southwest and southeast Utah, including St. George and Springdale, through Saturday evening. 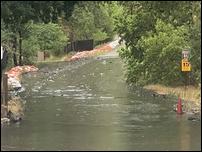 The National Weather Service issued multiple flash flood and severe weather warnings for areas across Utah as thunderstorms progressed throughout the state on Thursday.
×