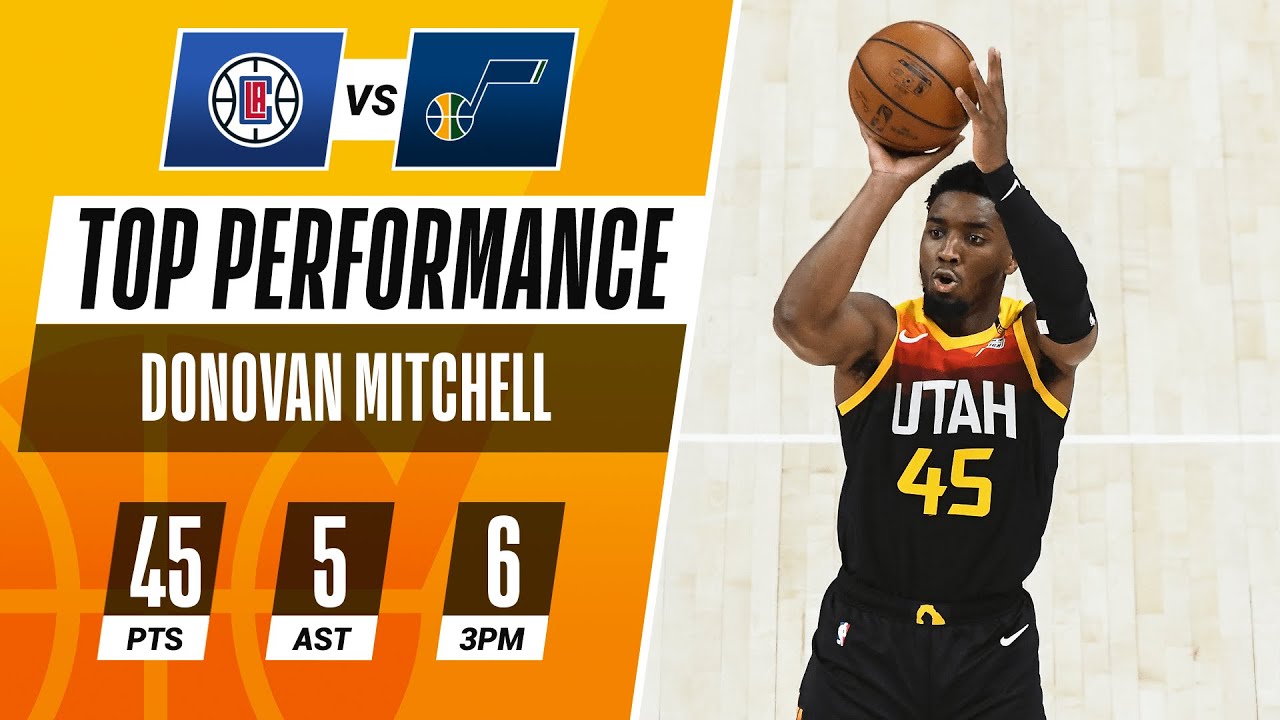 Donovan Mitchell Erupts for 45 PTS in the Game 1 Win! 🕷

SALT LAKE CITY — Donovan Mitchell was feeling lightheaded and nauseous. He wasn't making the right reads; he was, in his words, being "lazy."

Mitchell sat down for his postgame press conference and quickly named all the things he had done wrong: the careless turnover at the end of the first half, the times he was easily scored on, his blown layup at the end. He probably could have gone on and on if he wanted to.

It was almost like he was apologizing. But instead, he could have simply just said: "You're welcome."

In the first quarter Tuesday night, the Los Angeles Clippers went on a 22-2 run and the Utah Jazz missed 20 straight shots. Somehow that was all moot at the end of the game.

How? Donovan Mitchell is that dude.

Mitchell scored 45 points to spur a 112-109 comeback win and lead the Jazz to a Game 1 victory Tuesday at Vivint Arena.

The Jazz entered the second half down by 13 points; some of that was due to poor shooting — Utah was 5 of 20 from the 3-point line in the first quarter as it went over nine minutes without making a shot; some of that was the Clippers simply outplaying the Jazz even with their two stars also struggling from the field.

But Mitchell knew that with Mike Conley out and the Clippers switching defense limiting Rudy Gobert's rolls to the hoop that it was up to him to get things going.

"He's really competitive, but he's also really determined," Jazz coach Quin Snyder said. "I don't think he was feeling great tonight. His ankle was fine. He wasn't feeling great physically — was a little nauseous, was a little light headed. He's just not going to accept that."

But it took a little just over two minutes into the second quarter to realize Mitchell was going to take over the game. He hit a quick floater, banged home two 3s and then got inside for a soaring layup. And just like that, Mitchell had scored 10 straight points and the Clippers' lead was down to 5.

That was just the warning shot, though; Mitchell was far from done. He scored 32 points in the second half on his way to his fourth 40-plus point playoff game in his career; that tied Karl Malone, who was in attendance on Tuesday, for most in franchise history. Mitchell has played in only 28 playoff games; it took Malone 149 to reach that mark.

He's special, and his teammates know he's special. That's why when the Jazz came out for the second half, they were keenly aware that he was going to provide a lift. He didn't need to say anything, they already knew.

"He's just an amazing person; he's a great player," said Bojan Bogdanovic, who provided 18 key points in the game. "He saw that we are down 13 at halftime, so probably he thought, 'I gotta take over the game; I got to be extra aggressive, especially in the third quarter.' He got us back in the game and then brought energy to the crowd. He gave energy to the players. I mean just amazing, amazing performance from him."

With 1:19 remaining in the game, Mitchell slid into the paint and converted on a finger roll layup for to score 32 points in the second half and to give the Jazz an 8-point lead. It capped off a sensational half with Mitchell going 11 of 16 in the final two quarters; and after a very forgettable first half, the Jazz needed every bit of iit.

The Jazz shot just 32% from the field and 26% from 3-point range in the opening two quarters. The Jazz needed a spark in the worst way and Mitchell gave it to them, scoring 16 points in each of the third and fourth quarters to lead the Jazz to the victory. Utah shot 52% from the field and went 10 of 23 from behind the line in the second half to outscore the Clippers by 16 points.

the perfect photo does not exi... pic.twitter.com/R6j10ZztiH

"Donovan was going to come out aggressive," said Gobert who had 10 points, 12 rebounds and the game-saving block at the end. "He gave us a great lift. And he did a great job not settling for the jump shots but attacking them and putting pressure on them, finishing at the rim, drawing fouls, kicking out for the shooters. When we play that way, I think that's when we become very, very hard to guard."

But after the game, Mitchell didn't want to dwell on what he did right — the highlight-reel drives, the deep 3s, the game-winning plays — but on what he had done wrong.

"I didn't do a lot of things right for my team in the first half, and it really kind of ate at me — still does," Mitchell said. "It put my team in a certain position, and I feel like that was on me to come out there and just set the tone on both ends of the floor. I think that's really where my head was at — just going out there and just trying to find ways to be aggressive. Tonight it was getting to the rim; and I hit a few threes but, you know, who knows what's gonna be next game?"

And the next game is already what Mitchell is thinking about. As soon as Gobert blocked Marcus Morris Sr.'s 3-point attempt right before the buzzer sounded, he was already planning his next masterpiece.