'Kind of a repeating story': RSL drops points via 1-1 home draw with Minnesota before international break 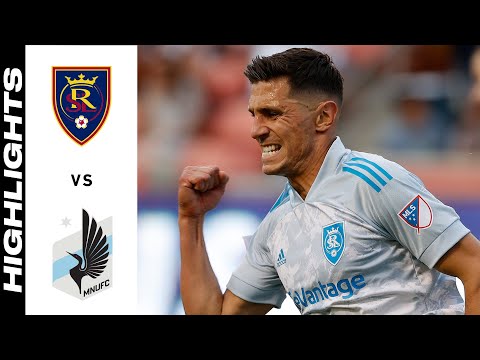 And once again, Real Salt Lake dropped points at home.

Kreilach's opener was countered by a late stunner from Niko Hansen, and RSL and Minnesota United FC split the points with a 1-1 draw Saturday night at Rio Tinto Stadium.

RSL (2-1-3, 9 points) has taken just five of a possible 12 points at home through the first two months of the season.

It's the third consecutive draw for RSL, which got off to a flying 2-0 start and has been held mostly stagnant — winless in four — since a disappointing 2-1 home loss to San Jose before back-to-back draws with Nashville SC and FC Dallas.

Some draws feel like a win, while others feel like points lost. At least, that's how plenty of fans are likely to see Saturday evening at Rio Tinto Stadium: a missed opportunity, at best.

RSL coach Freddy Juarez sees momentum — disappointment, for sure, but also momentum — in that Salt Lake has only lost once in six matches to start the season, including an unbeaten 1-0-1 record on the road.

"It's a cruel game, an unfair game, and when you take the emotion away from the game, you see a solid performance," Juarez said. "I was very happy with the duels we won in the game; that's tough when you play a team like Minnesota. They came with a plan, and played a lot of center mids in their part.

"We come in expecting to win, but the games are tough. We got a point, and it's important that we continue to accumulate points and keep ground with people. I've been in soccer long enough that when you tie some of these games you should've won, you end up winning a game that you have no business winning."

Defender Aaron Herrera agreed with the assessment — but added RSL should take fire and motivation from the goal after a similar lapse cost them all three points against the Earthquakes, as well.

"It's kind of a repeating story that we keep doing to ourselves: We go up 1-0, and we don't ever kill the game off and get that second or third goal. It always comes back to bite us," Herrera said. "We've really got to figure that out, how to go up a goal and continue to push the play and keep the game on our terms. We have to just end the game, honestly."

Damir Kreilach scores his 3rd of the season. pic.twitter.com/xePTjgJ36h

Kreilach opened the scoring against the Loons in the 13th minute, when the jack-of-all-trades midfielder redirected a ball from Pablo Ruiz via Aaron Herrera off the post and in for the 1-0 advantage. The play was straight off the training ground, with Kreilach barely glancing the ball off the inside of his boot to take the go-ahead goal.

The Croatian international and RSL vice-captain scored his third goal of the season with the right-footed finish that put the hosts in front through the first half.

Real Salt Lake kept the Loons (2-4-1, 7 points) without a shot on goal through 77 minutes, but couldn't capitalize on three other attempts on frame to increase its advantage.

The shot and the celebration #RSL#DaleRSLpic.twitter.com/zxGhzdnxTb

But in the 78th minute, Hansen equalized on the most indirect of redirected shots of the match. RSL goalkeeper Zac MacMath — playing in place of starter David Ochoa while he remains with the U.S. men's national team in Switzerland — made an initial save at the near post, but his punched ball collided with an onrushing Hansen and trickled over the line to knot up the match ahead of the final 10 minutes.

RSL defender Andrew Brody called the goal "unlucky" — and then some.

"Obviously, that goal is devastating, and it's a bit unlucky," he said. "I thought we had done extremely well to that point, and it's just one unlucky moment in the game. I thought we responded well, we were on the front foot and had a few chances. We just weren't able to find a winner."

With 88 minutes down, Juarez had only made one substitution — pulling off Anderson Julio for the fresh legs of Justin Meram — and Juarez didn't make another change.

Salt Lake searched desperately for another goal — through Andrew Brody, Pablo Ruiz, Meram or anyone else able to get forward. But the second score never came, and Minnesota departed Utah more than content to split the points.

And we're tied at Rio Tinto. 💯

Niko Hansen's first #MNUFC goal is a huge one. #RSLvMINpic.twitter.com/6d9QqoekFC

In fairness to Juarez, the rest of the bench didn't have many options on the attacking end. Douglas Martinez or Maikel Chang were listed in the 18, but both have struggled with consistency and fitness in recent weeks. Beyond that, RSL's bench consisted of backup goalkeeper Andrew Putna; defenders Donny Toia, Ashton Morgan and Erik Holt; and midfielder Justin Portillo.

Could any of them help RSL secure a goal and break through for all three points? Perhaps. But Juarez also liked what he saw out of the 10 field players late, as well, and added that the coaching staff was about to insert wing defender Donny Toia to help kill off the game moments before Hansen's equalizer.

The match was the final at Rio Tinto Stadium before a FIFA-approved international break that will disrupt most of Major League Soccer over the next three weeks. RSL will not play again until June 18, when it hosts fellow (temporarily based) Sandy soccer club Vancouver Whitecaps FC at 8 p.m. MT.