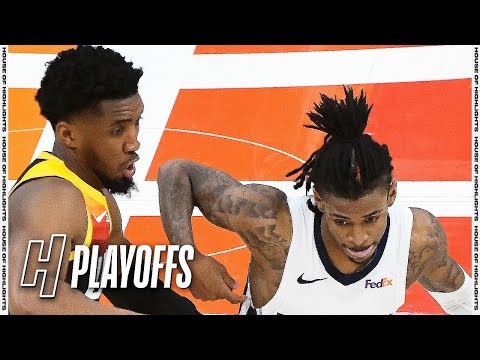 SALT LAKE CITY — It was a shot less than two minutes into the game. But it sounded like the game-winner.

The return of Utah's star guard sparked the Utah Jazz early, and Rudy Gobert dominated late as the Jazz beat the Memphis Grizzlies 141-129 Wednesday in Game 2 to even up the best-of-seven series.

Game 3 is set for Saturday in Memphis.

Mitchell finished with 25 points on 8-of-19 shooting in his first game back from the sprained ankle he suffered on April 16, and he didn't need long to make an impact in a vital game for the Jazz.

Only 1:47 had ticked off the clock when Mike Conley found Mitchell wide open on the wing. The 13,000 fans at Vivint Arena put their arms up in anticipation and it was bedlam as his shot swished in.

After mostly a dud of a performance in Game 1, it felt like the Jazz finally showed up for the playoffs Wednesday. The team played with an energy that was completely absent from the series-opener on Sunday.

"It's a competitive spirit that he has, and you can feel it when he plays," coach Quin Snyder said. "I think that's something that I think our guys also feed off."

Mitchell played to the crowd after big plays — shots, drawing fouls, game-swinging calls. He screamed in excitement and constantly celebrated with teammates; his passion being back was contagious.

"It's been more than a month, so I think he was really antsy to get back out there and we missed him, so it was great, getting his energy, his positivity, his aggressiveness and obviously his talent," Gobert said. "It was definitely a good time to have him back. I didn't feel like he was out. He had the kind of game that — that wasn't the first game back."

And not after a first quarter back where Mitchell had 12 points and his presence energized a Jazz offense that was stagnant in Game 1. For example, the Jazz were 7-of-10 from the 3-point line in the first quarter.

But the game was far from over.

Mitchell forced foul No. 4 on Brooks quickly in the third quarter, but Memphis coach Taylor Jenkins rolled the dice and kept him in.

The gamble seemed to breathe new life into the Grizzlies. In the span of six minutes, Memphis scored 30 points as Utah struggled to get a single stop. The Grizzlies shot 18-of-27 from the field in the third and added five offensive rebounds. Do the math and there were only a few possessions the Grizzlies didn't score.

Ja Morant and Brooks combined for 24 points in the period and the Grizzlies scored 43 points to cut Utah's lead to 6 heading into the fourth quarter.

"They had more than an efficient third quarter — that first six minutes, they were terrific," Snyder said.

The same can be said about Gobert's fourth quarter. The All-Star center started the final frame with two dunks in the first two minutes and provided his trademark paint protection to help push Utah's lead quickly back to 17.

Gobert scored 10 of his 21 points in the final 12 minutes and finished with 13 rebounds and four blocks — including a highlight-reel stuff of Morant in the first half — in the win.

"I think Rudy made some adjustments individually where he was able to put himself in the play more and be more impactful, and you know that's something that he's always trying to feel," Snyder said.

Memphis made one more push at the end — an 8-0 run led by Morant, who finished with team-high 47 points, that cut the lead again to single digits. But the Jazz, once again, withstood the rally to tie up the series.

"They're gonna be wired and geeked up for Game 3," Mitchell said. "We gotta be able to continue to play this way because when we play this way — outside of the few mistakes we made in third to kind of let them come back — we're tough to beat."