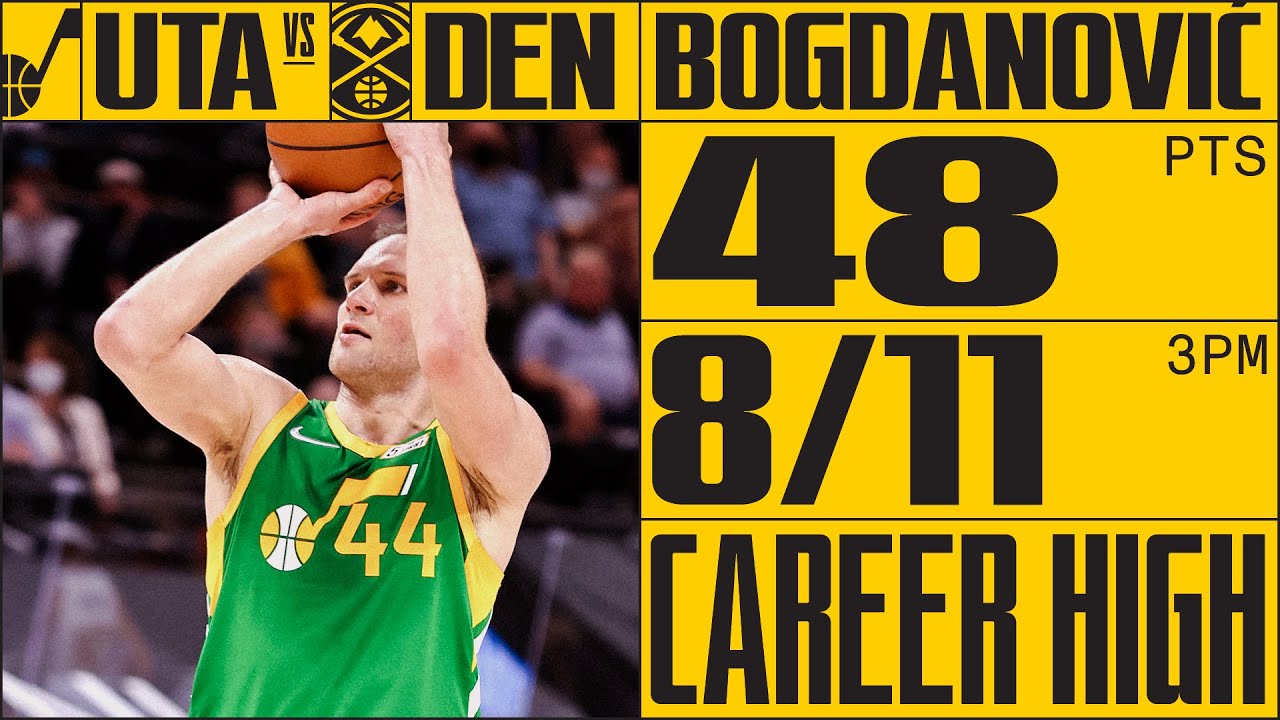 The chant from the Vivint Arena crowd intensified as Bojan Bogdanovic stepped to the free-throw line in the closing seconds of Friday's Utah Jazz game to put the finishing touches on his masterpiece.

A masterpiece he never expected. It's been 1,879 days since Bogdanovic scored 44 points when he was in Brooklyn. He's had big nights since — game-winners and numerous 30-point games — but he assumed he would never top that night from way back in 2016.

So as the crowd serenaded him, he couldn't help but put on a wide boyish grin. He stepped to the line and knocked down his 47th and 48th points of the evening, setting a new career-high and cinching a 127-120 Jazz victory over Denver.

"I want to thank you guys for making this night special for me," Bogdanovic said during his walk-off interview to the crowd cheering his every word.

He made it special for everyone else.

"I don't even know how to put the performance into words because it just seemed like every shot he threw up there was just hitting the back of the net," teammate Georges Niang said.

That reaction was common throughout the team — and it was pretty close to being accurate. Bogdanovic was 16 of 23 from the field, hit 8 of his 11 3s, and even added eight rebounds in his virtuoso performance. He hit catch-and-shoot 3s, made plays off the dribble and posted up. He even had a flailing reverse layup that banked in.

"What didn't we see from him tonight?" Jazz coach Quin Snyder said. "He was making great reads. He really scored every way possible."

Bogdanovic's play has been crescendoing to a game like this. In the previous five games, Bogdanovic has averaged 25.8 points on 57% shooting. Without Mike Conley and Donovan Mitchell in the lineup, he has turned into the Jazz's No. 1 option on the offensive end, and he has more than answered the bell.

It's something that many would have doubted based on his early-season struggles. Bogdanovic's wrist surgery didn't just steal a playoff series away from him (and likely a series win away from his team), it also stole some of his confidence.

As the season began, he was hesitant to play through contact and that limited his ability to finish. And when the shots close to the basket weren't falling, the long-range ones soon followed. It was a vicious cycle, and one that he had to work his way out of.

"He just stayed consistent with his approach, and continued to work," Snyder said. "He's a heck of a player, had a great night and he's obviously capable of doing that. He's made big shots and had big games to carry us before. I don't think anybody in the locker room is surprised."

Not surprised, but happy — and maybe a little relieved. When his team needed him most, he rediscovered his old game. His handle has been tighter, his decisions quicker and his shot nearly automatic. With Mitchell and Conley out, it was like Bogdanovic felt that he needed to replace what they normally do for the Utah offense. He's done that — and now the Jazz have won four straight to stay on top of the Western Conference standings.

"When he's able to put pressure on the rim and shoot the way he always shoots, he's one of the best scorers in the game," Jazz center Rudy Gobert said.

And that scorer led a Jazz offense that was elite for much of the night on Friday. Utah shot 46% from 3 and 49% from the field, and it needed to, to keep up with the Nuggets. Led by Michael Porter Jr.'s 31 points, Denver shot 52% from the field in a game that turned into an offensive showcase between two of the top teams in the league.

"I just made a play, I was about to anticipate what he was going to do. And, and once he gathered, I knew I was gonna time it," Gobert said.

That play got the crowd to their feet — where most stayed until the final "Bogey. Bogey Bogey" chant was finished.

"I know that a career-high 48 is not easy to score but the most important thing is that we really really won a big, big game," Bogdanovic said.

Playoff update: Utah (49-18) remained one game up on the Suns (48-19) for the No. 1 seed in the West after both teams won on Monday. The Jazz will host the Rockets on Saturday with Phoenix traveling to Los Angeles for a Sunday showdown with the Lakers. The Jazz are currently projected to finish with the best record in the conference by two games.