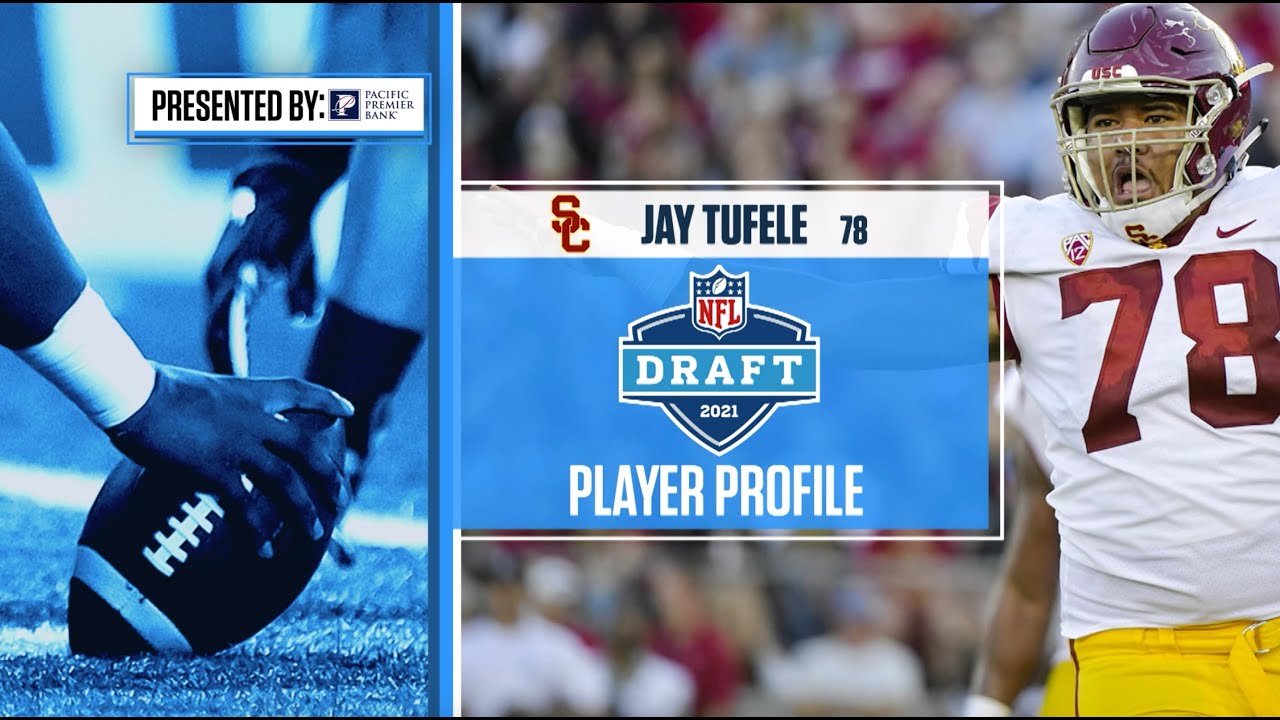 SALT LAKE CITY — It's been two years since Jay Tufele played an organized game of football.

But what they saw two years ago from the USC defensive tackle was all the Urban Meyer needed to see.

Tufele was selected with the first pick of the fourth round, leading off the final day of the 2021 NFL Draft with the No. 106 overall pick Saturday by the Jacksonville Jaguars, who announced the pick from Wembley Stadium in London.

"Today is the most special day in my life," Tufele said. "It's everything, from being a little kid to everything that's happened. It's a blessing, and I'm so grateful.

The former Bingham High standout joins first-round talents Trevor Lawrence, the former Clemson quarterback who was taken No. 1 overall, and Tigers running back Travis Etienne in Jacksonville. He's also the third defensive player selected by the Jaguars, alongside Georgia cornerback Tyson Campbell and Syracuse safety Andre Cisco, who were taken with the No. 33 and No. 65 overall picks, respectively, Friday.

In another reality, Meyer could've coached Tufele in college; the former Utah coach recruited him heavily to Ohio State before the big-bodied interior pass rusher signed with the Trojans. Instead, the two will join together in Jacksonville, in Meyer's first NFL coaching job that took him out of retirement and TV work with FOX Sports.

The 4th round draft pick live from @wembleystadium

"He told me that he thought he really had me," Tufele told reporters after he was selected. "Things didn't happen the way he wanted, but at the end of the day, we're back together and we're family now. It's time to go be great. I'm so grateful to be part of his team."

In the Jags, though, Tufele sees a perfect reunion with Meyer and his first-time NFL staff with a lot of college connections.

"I know that our coaches are going to expect me to be that guy, to come in right away, and to get right to work," he said. "We're going to be working hard every day, and being the guy I am — explosive and nasty — I'm going to bring my game to the Jacksonville Jaguars."

Tufele, 21, was a two-year starter at USC before opting out of the 2020 season due to COVID-19 concerns — concerns that included his sister's extreme sickness from the virus during the fall.

The 6-foot-3, 305-pound defensive tackle was projected to be one of the top defensive linemen nationally in 2020, following a season where he piled up 41 tackles, 6.5 tackles for loss, 4.5 sacks and a pass deflection in 13 games — all starts — en route to 2019 All-Pac-12 first-team honors and USC's team defensive lineman of the year.

He was trending upward when the pandemic knocked out his season — first his conference, then his team, then Tufele individually.

"We'll never know. But I know I would've done some amazing things for my team," Tufele said after posting a 4.98 40-yard dash at USC's pro day. "In the end, I don't regret what I chose. I'm grateful for the opportunity that was given to me."

Tufele finished his college career appearing in 25 games for the Trojans with 65 tackles, 7.5 sacks and a fumble recovery for a touchdown.

The 2015 Salt Lake Tribune prep football MVP as a junior with 57 tackles and 10.5 sacks, Tufele earned all-state first-team honors at Bingham before signing with the Trojans. The one-time rugby player was as adept in scrums as he was on the line, where he became one of the more feared interior pass rushers in the Pac-12 — and will bring the same toughness to the Jaguars.

Sitting in front of a video conference with Jaguars team reporters from his family's Salt Lake-area home Saturday morning, Tufele was happy for the path he took to the NFL — opt out, early departure and all.

"With COVID itself, it's been a life-changing experience, especially the way it's affected my family. Everyone got it, and it hit my sister the hardest, in the way you wouldn't want on anybody. It was very hard to go through that," he said. "Having the whole season ended by the Pac-12 at the time, I was ready to come out and prove that I'm ready to come into the league and be great.

"At the end of the day, I don't regret it and I'm grateful I was able to come out of this process stronger and faster. I'm very grateful."