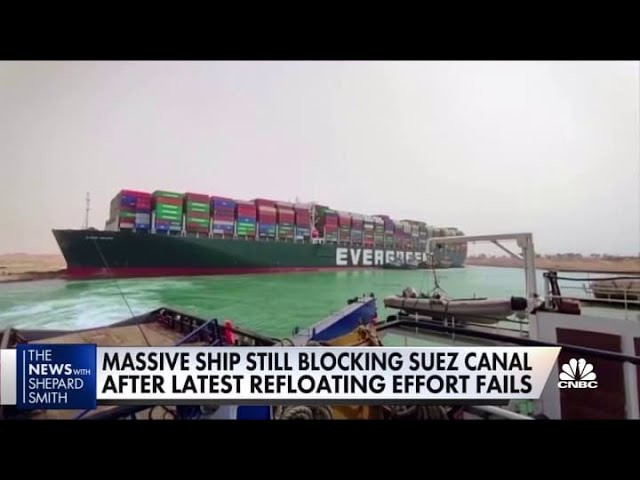 CAIRO (CNN) — Efforts to dislodge the huge container ship stuck in the Suez Canal intensified Saturday as the backlog of ships at either end of the crucial waterway grew, heightening concerns over the impact of the blockage on global supply chains.

The Ever Given, a container ship almost as long as the Empire State Building is tall, ran aground in the Egyptian canal on Tuesday after being caught in 40-knot winds and a sandstorm.

Since then, dredgers have been working to remove vast quantities of sand and mud from around the port side of the 224,000-ton vessel's bow.

The pilot — who is not authorized to speak to the media but works for the Suez Canal Authority (SCA) — believes that several factors are now contributing to the anticipated success of the rescue operation including the near completion of the dredging work, the expected high tides and the availability of powerful tug boats.

High tide, expected at 10 p.m. local (4 p.m. ET), is an important factor in the rescue operation. Several other attempts over the past few days have failed.

A team of expert salvors from Dutch firm SMIT Salvage and Japan's Nippon Salvage — who have worked on several high-profile operations in the past — have been appointed to help the SCA re-float the ship, the charter company Evergreen Marine said in a statement.

Authorities say they have managed to remove almost 706,000 cubic feet of sand to free the Ever Given.

Asked if authorities had other plans in case of failure, the official told CNN: "This is our only option now."

Speaking at a news conference Saturday, SCA chairman Osama Rabie gave details of the rescue operation, which he described as "technically difficult" and "involving many factors."

"We are facing a difficult and complicated situation, we work in a rocky soil, the tides are very high, in addition to the huge size of the ship and the number of containers that make it difficult," he said. "We cannot set a specific date for the ship to float, it depends on the ship's response."

The ship was "very responsive" on Friday, leading to optimism that the job could be completed that night, he said. However, the operation had to be halted because of the tides.

Around 9,000 tons of ballast water have been removed from the ship, Rabie said, with the dredging taking place during low tides while 14 tugs worked during high tides. Rescue teams managed to temporarily restart the rudder and propellers on Friday night before a low tide stalled their efforts, he said.

In contrast to the pilot's comment, Rabie outlined another scenario that would require them to lighten the ship load by removing containers, a time-consuming and painstaking process to which they "hopefully" would not have to resort.

Around 321 ships are currently waiting to transit through the canal with no detours from inside the channel at this point, he said.

Rabie said the reasons behind the accident remain unclear. "There are many factors or reasons, fast winds and the sandstorm could have been a reason but not the main reason — it could have been a technical mistake or human error," he said. "There will be further investigations."

Rabie added that a number of countries including the United States, China, Greece and the United Arab Emirates had offered assistance in dislodging the ship.

The US Navy in the Middle East planned to send an assessment team of dredging experts to the Suez Canal as soon as Saturday to advise local authorities, according to two US defense officials.

The blockage, in what is one of the world's busiest and most important waterways, could have a major impact on already stretched global supply chains, with disruption escalating with each day that passes.

If the latest attempt to refloat the ship fails, the vessel — which measures 400 meters (1,312 feet) long and 59 meters (193 feet) wide — could still be freed by "early next week," according to plans laid out by the head of a Dutch salvage company.

Peter Berdowski of Boskalis, a sister company of SMIT Salvage, told Dutch TV newscast "Nieuwsuur" on Friday that a more thorough investigation has shown that the ship's stern is "not entirely pushed into the clay."

That would allow heavy tug boats to take advantage of "lever power" by pulling at the stern, he said.

He said the hope was that their pulling power — combined with the dredging work, a high tide of 40 to 50 centimeters next week, and the lever power of the ship's stern being relatively free — would be enough "to release the ship sometime early next week."

If that fails, the next step would be removing up to 600 containers. "In parallel, we are already mobilizing a crane," Berdowski said. "This will also be delivered this weekend, which will enable us to remove containers from the front of the ship."

His optimistic forecast will be welcome news to many. Shipping experts warned earlier this week that it could take days or even weeks to free the ship.

Meanwhile, billions of dollars' worth of vital cargo and sensitive products are backlogged on the hundreds of vessels whose way is blocked.

The EU director of NGO Animals International Gabriel Paun warned that thousands of animals being transported on the vessels — mostly Romanian — could be at risk of dying if the situation is not resolved in the next few days.

"We are sitting in front of a major tragedy if the channel is not released in the next 24 hours because there are vessels that will run out of (livestock) food and water in the next two days," Paun said.

Some ships have food and water for six more days and "if decide today to return to Romania, then they have a chance — but if the blockade lasts between two and six more days we will have a disaster," Paun added.

One ship carrying livestock, the Nabolsi, has been sailing for 21 days after departing from Colombia on March 6, and is now awaiting passage by the blocked canal with animals on board, Marine Traffic spokesman Georgios Hatzimanolis said.

Rabie, of the SCA, said there were three boats with livestock in the canal, and that the Egyptian Ministry of Health had sent them animal feed and veterinarians.

Each day that passes comes at a high cost to companies and countries whose trade has been held up by the gridlock. About 12% of the world trade volume passes through the Suez Canal, and it usually handles about $10 billion a day in cargo.

At least 10 ships, including oil and LNG tankers and container ships, had rerouted away from the canal as of Friday, according to Marine Traffic and data intelligence firm Kpler.

"There are already now multiple ships ... bypassing (the route from the Mediterranean into the canal) and are now going south ... it is the right point in time to make that decision," said Lars Jensen, the head of Sea Intelligence Consulting, a firm provides consultancy to the shipping industry.

The Indian government on Friday said it had advised its shipping lines to explore the option of rerouting of ships via the Cape of Good Hope in South Africa, according to a statement from the Indian Ministry of Commerce and Industry.

It noted that such rerouting usually takes 15 additional days.

This Suez Canal route is used by Indian exporters and importers for trade worth $200 billion with North America, South America and Europe, the statement said. The ministry added that it would identify and prioritize perishable cargo for movement.

Even before the Ever Given ran aground, global supply chains were being stretched to the limits, making it much more expensive to move goods around the world. A prolonged closure of the key route between Asia, Europe and North America would only make matters worse.

Discussing the issue of potential damages claims, Toshiaki Fujiwara, senior managing director of Shoei Kisen KK, the ship's owner, said Friday that "the company has not received any claims at this point," adding that "it may take one (to) two or several years to come up with those details."

Evergreen Marine, the Taiwanese company which operates the Ever Given, has claimed that Shoei Kisen KK bears responsibility for the accident, Fujiwara confirmed.