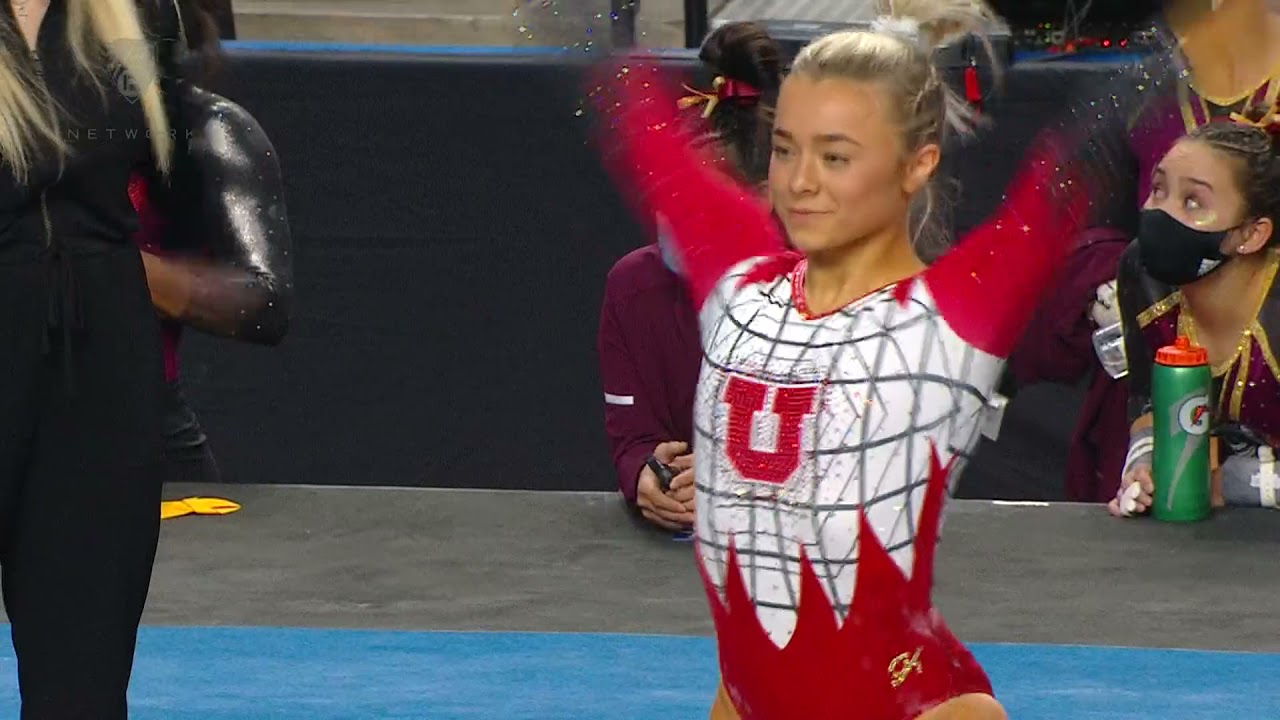 WEST VALLEY CITY — Channeling the 2017 season, the No. 6 Red Rocks came into the Pac-12 Championship determined to overcome their No. 2 seed in the postseason meet.

The seeding didn't matter, though, as the Red Rocks, who were sporting new "Red Spider" leotards, dominated the meet to claim the Pac-12 Championship Saturday night at the Maverik Center with a 197.725 score — a season high. The Red Rocks become the outright champs in 2021 after also claiming the regular-season championship with an undefeated conference record.

"Seeding doesn't really mean that much," sophomore gymnast Maile O'Keefe said. "We were just really focused on ourselves."

"They were hungry," Utah head coach Tom Farden said. "The last two weeks, maybe two and a half weeks of practice, have been really good and solid — confident. They just fed off of that, and it was a tight competition all the way through the night. I do feel like they came in with a little bit of a chip on their shoulder tonight and something to prove."

The Red Rocks proved they could thrive under pressure, even when things didn't go their way at times.

No. 5 California, which came into the postseason meet as the No. 1 seed, finished in second with a 197.375 score; No. 13 UCLA came into the meet as the lowest-ranked team to compete during the second session of the Pac-12 Championship but finished with a 196.725 score to place third; and No. 11 Arizona State, which struggled to stay close in the competition throughout the night, finished in fourth with a 196.375 score.

O'Keefe won the all-around competition comfortably, her sixth all-around win of the season, with a near season high score of 39.700. Teammate Cristal Isa finished just behind her with a 39.650 score to lead all gymnasts.

"She was determined tonight — in a good mind space — and wanted to come out here and put on a show," Farden said about O'Keefe before adding that the two Utah gymnasts set the tone for the evening.

The two Las Vegas natives and friends opened the meet with back-to-back 9.950 scores in the opening two events (bars and beam), with O'Keefe adding a third straight 9.950 score on floor. By the time O'Keefe landed a 9.850 score on vault for the final event of the night, she was the undisputed winner as the Red Rocks dominated the competition. O'Keefe, who was also named the Pac-12 Gymnast of the Year, won three events — bars, beam and floor — and was the clear leader on the floor Saturday night.

And though the Red Rocks sailed to a season-high score ahead of the NCAA's Regionals, which will take place at the Maverik Center on April 2, Utah opened up the meet with a shaky start as Abby Paulson, Alani Sabado and Alexia Burch failed to break anything higher than a 9.775 with stumbles on their dismounts. But senior Emilie LeBlanc broke up the low scores and stuck the first landing of the meet for the Red Rocks to score a 9.875.

The #Pac12Gym title belongs to the Red Rocks!

An amazing day of competition across the Pac-12 today from Maverik Center in Utah. 🤩#BackThePacpic.twitter.com/DpMIsPa2ZF

"It sparked us," Farden said. "I mean, really if you think about it, the first two bar routines were fine, and nothing was damaging; nothing was incredible, but then Emilie went up there and it really set the tone for the last two bar routines. I believe that either tied or was our season high on bars, and so for her to do that it really showed leadership. She's been there, she's a senior, she knows what to do. It was a momentum changer for us."

Prior to LeBlanc swinging the momentum in Utah's favor, Farden gathered his team and gave them a little pep talk — "I just went with my gut," he said.

"We really tried to focus in on trying to handle the pressures of the whole season," he said. "Utah gymnastics is a little bit of a juggernaut. I was trying to ease them back a little bit and let them do their gymnastics. ... It was just gut, and so I just went with my gut and told the athletes to slow things down and stay in your moment — it'll get a little bit better, because sometimes the external pressure of the championships can get to teams."

"He was kind of just telling us, you know, we need to trust ourselves — slow down a little bit and do our routines," O'Keefe added. "Because if we push, nothing really happens the way we want it to, so we just have to relax and do what we need to do."

Following LeBlanc, O'Keefe and Isa worked their magic and rounded out the event with back-to-back 9.950 scores. It was good enough to put Utah in the second position after the first rotation with a 49.325 score — a season high just after a season-high 49.525 score from UCLA on floor.

But that's all the Red Rocks needed to jumpstart the meet as the next two events are where the team shined and put distance on their competitors.

In the leadoff position, Alexia Burch, who was named the Pac-12 Specialist of the Year at the conclusion of the meet, set the tone for the beam team and stuck a 9.90 after a nearly flawless routine — and the scores only climbed from there.

But the floor routine is where Utah cemented its win and scored a nation's best score for the season as the Red Rocks scored no lower than a 9.90.

"I know it was significant, but you never take anything for granted in sports," Farden said. "Anything can happen in sports, and so you don't take it for granted."

And it's a good thing Utah built up such a dominant lead after three rotations because the final event — vault — turned out to be its biggest struggle; the Red Rocks finished with a near season-low 49.050 score on the final event. Utah was forced to count a 9.725 score from Stanhope after Burch uncharacteristically sat down on her landing to finish with a 9.300 score.

Cammy Hall, who was scheduled as anchor for the final event, was a last-minute scratch as head coach Tom Farden replaced her with Sabado for her first scored vault, a 9.80.

"I don't like to do that because we have event coaches that are very capable, but I felt it was necessary to do what we needed to do to secure the win," Farden said about moving Hall out of the lineup. "And so a little unorthodox; I know Red Rock fans are definitely not used to these last minute changes but you've got to go with your gut at the end of the day."

Farden's gut decision worked as Utah stayed atop at the end to claim its first Pac-12 championship since the 2017 season. Maybe the No. 2 seed is the key to a victory after all. Whatever the reason, Utah accomplished its first goal of the season, despite an ever-changing situation due to a global pandemic.

"It's a goal that we have every year, and it's hard to do," Farden said while laughing. "The regular season thing is one thing because you've got to be so consistent throughout and get up for every Pac-12 meet, which that in and of itself is a gauntlet, but this is different; it's on podium. ... It's validation for your preparation for postseason. Each year you coach the teams a little bit different and it's just really satisfying for the staff, for all of us, for the program to remain at a high level.

"Feeling really grateful right now, especially during a pandemic and the challenging year that every program has had, not just gymnastics at the University of Utah, but every program with everything we have to go through. So, pretty spectacular."

Utah will now prepare for regionals on April 2, which will once again be hosted at the Maverik Center in West Valley City as one of four regional locations this year. The regionals drawing will take place March 22, where teams 1-16 will be seeded and ranked based off its national qualifying score, and the remaining teams placed geographically.

The final scoring of the night between the two sessions is as follows: