With its rich melting pot of unique names, no single list could contain every oddly named location in Utah. From names dating back to Native American inhabitants and early settlers of The Church of Jesus Christ of Latter-day Saints to names based on random accidents and misunderstandings, Utah has its fair share of eyebrow-raising city names.

There is nothing too mysterious about the name of this twice-settled town. Founded in 1864 by Latter-day Saint settlers, the town was named after the circular valley in which the settlement stood, reports Utah.gov.

Abandoned a short while later because of conflicts with the nearby Native American tribes, the town was resettled in 1874 and was famously known as the town where Robert Leroy Parker, later to be known as Butch Cassidy, received his childhood education. You can find the small community north of Panguitch along Highway 89.

Predating the furry little red character from Sesame Street of the same name by about 70 years, Elmo is an agricultural community found eight miles north of Huntington. According to the Emery County website, its name was actually derived from the first letter of the last name of the first four families that settled there: Erickson, Larsen, Mortensen and Oviatt. 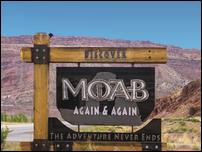 How 10 Utah places got their bizarre names

Utah is rife with creative names — from Piute Reservoir to shining Panguich. Here are a few of the weirdest-named places in the Beehive State.

This selfless little town was not, as you might assume, named in recognition of any great service-oriented person. The town of Helper derives its name from a railroad term. In the 1880s, the Denver & Rio Grande Western Railroad extended its reach through Castle Valley in a quest for a good coal mine location. High-quality coal was discovered in Castle Gate and with the creation of a mining camp, the settlement was born.

According to Intermountain Stories, the town was named after the "helper" locomotives that helped pull trains up the steep grade on that stretch of the railroad.

The relatively new town of Hideout was established in 2008 and is home to more than 800 people living in the mountainous region near the Jordanelle Reservoir. The city, developed by Mustang Development company, was established after the Utah State Legislature passed H.B. 466. The bill allowed a new town with 100 to 999 residents to be established if it had the signatures of the owners of the majority of the land area, reports a Deseret News article.

The bill did not require the consent of the residents. If a petition met these requirements, the county was required to grant the petition and appoint a mayor and town council. The bill was later changed to require the support of half the residents and it allowed for an elected mayor and town council. There also needed to be five petition sponsors. Under this revised law, the town of Hideout was incorporated in June 2008.

The town of Hideout is named after Hideout Canyon, a nearby canyon Utah Collections and Multimedia Encyclopedia says it is named for its history of providing sanctuary for rustlers who would steal horses and cattle from nearby ranchers and then hide in the canyon.

No, there has never been a hurricane in the town of Hurricane, a fact most visitors could deduce by its lack of proximity to the ocean. However, according to the City of Hurricane website, the legend is that in the 1869s, Church of Jesus Christ leader Erastus Snow visited the town and had a whirlwind blow off the top of his buggy. He is supposed to have said, "Well that was a Hurricane. We'll name this Hurricane Hill."

If you visit the town and want to sound like a local, remember the name is pronounced "Her-ah-kun," not "her-uh-kane."

Another town in Utah with a misleading name, Kanarraville was not named for a colorful warbler, rather for a Piute Indian Chief by the name of Canarrah or Quanarrah who lived near the original settlement. Established in 1862 as a settlement for farmers, ranchers and miners, the town's original name of Kanarra was later changed to Kanarraville, says the Kanarraville website.

Its population has hovered between 200 and 400 people throughout its history and is known for nearby Kannarraville Falls.

Another town name for Native American inhabitants, Kanosh was named for Chief Kanosh of a nearby Pahvant Indian tribe of about 400 people. Chief Kanosh was friendly with the area's early settlers and worked to maintain peaceful relations between the two peoples.

Chief Kanosh was baptized into The Church of Jesus Christ of Latter-day Saints in 1858, though according to Utah Historical Markers he continued to practice shamanism and ritual hunts following his conversion.

Perhaps the only Utah town to be named for an active volcano, Loa was established in 1878 by a band of Latter-day Saint settlers 205 miles south of Salt Lake City, reports Utah History Encyclopedia. Franklin W. Young, a member of one of the original 40 families who settled the area, had spent time in the Hawaiian islands and retained impressive memories of Mauna Loa, an active volcano.

The volcano's name, Mauna Loa, means powerful, high and large, according to the Utah History Encyclopedia. At Franklin's suggestion, the community took on the name Loa and bears that name to this day.

While there aren't many historical records indicating the roots of the small town of Lynndyl, folklore cited on the Fillmore City website indicates the name's origins. Apparently, Lynndyl was named when someone from Salt Lake City asked the telegrapher at the railroad construction site what city or town she was in. The woman looked down at her shoe and saw the words "Lynn Mass" printed there. She answered that she was "at Lynn."

There was already a township in Box Elder County named Lynn, however, so when the application was filed at the post office the suffix -dyl was added to create the name Lynndyl.

Different from a majority of Utah cities and towns, Vernal was not originally settled by early pioneers. According to the Utah History Encyclopedia, President Abraham Lincoln created the Uintah Indian Reservation which comprised much of the Vernal area in 1861.

Captain Pardon Dodds, the Native American agent for the reservation, remained in the area after retiring. He built the first cabin in the Ashley Valley, attracting other settlers to the valley which led to the eventual establishment of a fort.

The settlers requested the name Ashley Center, but because it was too similar to the already-named town of Ashley, the U.S. Postal Department assigned the name Vernal to the budding community. Some say it might be derived from the Latin word for spring: vernalis.

While Robert J. DeBry has retired from the practice of law, the firm he founded continues its dedication to bettering the quality of life in Utah by providing legal services to the Utah community. If you've been injured in an accident and need legal assistance, please contact our office at 801-699-9999.
×
Robert J. DeBry & Associates