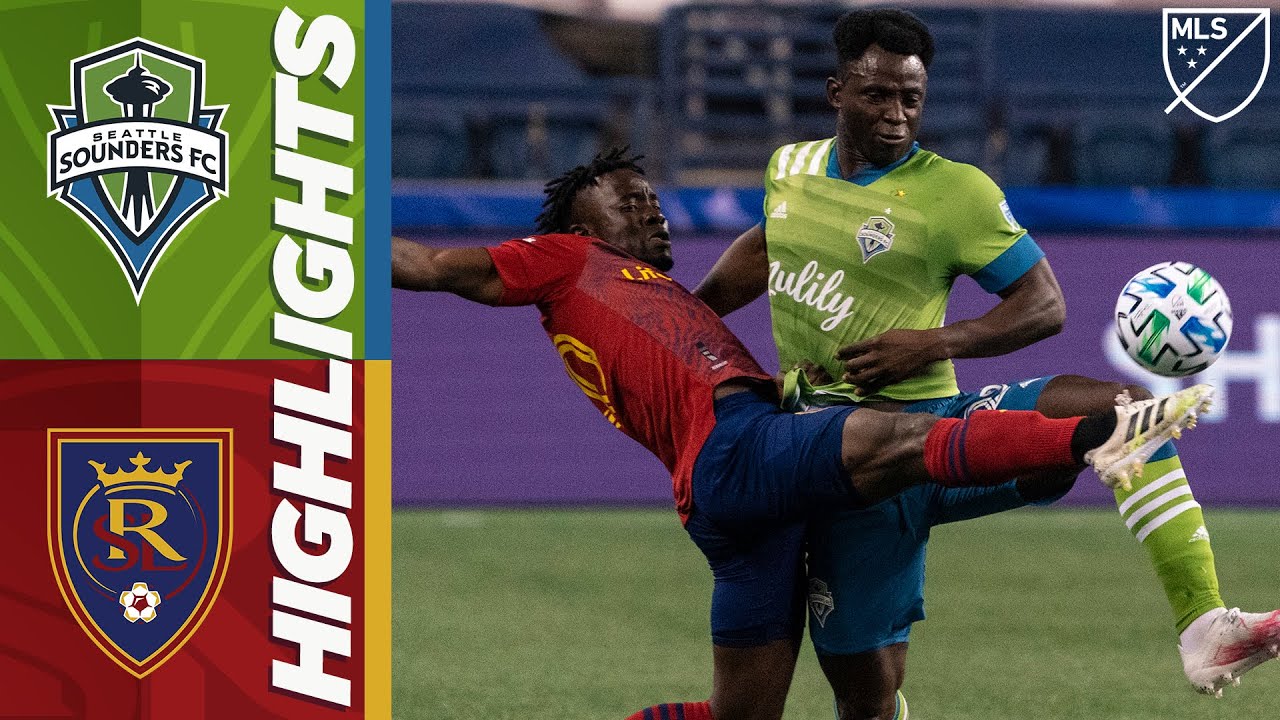 SALT LAKE CITY — Jordan Morris needed just 45 seconds to put the ball in the back of the net Wednesday night.

Fortunately for Real Salt Lake, Morris was judged to be offside.

It would not be Seattle’s final opportunity.

Morris scored 28 minutes later, and the Sounders held Real Salt Lake without an official shot on target Wednesday night en route to a 2-1 win over RSL at CenturyLink Field in Seattle.

“I thought the fight was there,” RSL midfielder Justin Portillo said. “We never gave up, even being down 2-0. It’s a tough league, with a lot of good teams and a lot of games in a row here. It’s a tough game, big field, quick turnaround — but we’ve got a big game Saturday.

“Hopefully we can get three points.”

Yeimar Gomez Andrade added a goal in the second half for Seattle (9-3-3, 30 points), a free header off a free kick from Nicolas Lodeiro in the 60th minute that doubled the home team’s advantage.

Maikel Chang pulled one back just four minutes after checking in during the 64th minute, slicing a shot that caromed off Seattle’s Nouhou Tolo that cut the deficit back to one.

That man again! ⚡️@JmoSmooth13 finishes a slick move for the opener. #SEAvRSLpic.twitter.com/Eb7Vo9DShK

RSL, which has just one win since Sept. 10 that includes a 3-1 home loss to LAFC on Sunday, has scored just two goals in its last three matches — two losses and a 0-0 draw with Minnesota — as it hits the final seven matches of the regular season with a 4-6-6 record and one point behind Houston for the final playoff spot in the Western Conference.

Going on the road against one of the top teams in the league makes it more difficult. But outside the first 30 minutes, RSL coach Freddy Juarez said his team found the game more while playing in a new 5-3-2 formation — a change from the usual 4-2-3-1 — and limited Seattle to two chances after halftime, though the Sounders converted one of them.

Facing an RSL lineup that included Portillo, Erik Holt, Nick Besler and other reserves, Morris converted the first goal with a one-touch finish in the 28th minute, finishing off a cross from Cristian Roldan that gave Seattle a lead it would never relinquish.

With the congested schedule Major League Soccer imposed on all of its teams, squad rotation becomes a necessity. Pair it with the first team in the West to reach 30 points, and it becomes difficult — but also another moment of experience for a roster that will need every player down the final stretch of the season.

“It’s tough to play three games in six or seven days, and they are going to get their opportunities,” RSL goalkeeper Andrew Putna said. “I thought we did well tonight, except for a couple of moments. The second goal was a mental mistake … but I think it’s always going to be good for young players to get experience. But it’s just tough now with seven games to go. We’re going to need to start picking up points to get into the playoffs.”

The Sounders held RSL without a shot on goal before the break, and extended the visitors’ woeful first-half disadvantage across the season to 11-3 in favor of RSL’s opponents.

Yeimar with another goal vs. RSL! 💥

Perfect delivery from Lodeiro too. 2-0. #SEAvRSLpic.twitter.com/Fxd2RfX9AR

Chang’s deflected strike in the 68th minute cut the deficit to one. But not even a late offensive insertion from Justin Meram and Jeizon Ramirez could overturn the final result for Real Salt Lake, which fell to ninth place in the 12-team Western Conference.

That sets up a mad dash through the final seven games of MLS’s condensed regular season, with RSL chasing a playoff spot from behind.

“I think the biggest thing is, I can’t panic and I won’t panic,” Juarez said. “We came to Seattle, we played a different formation, and we came in here brave. We put ourselves in position to collect a point, and won’t get credit because we didn’t get the point.

“The game means a lot, but point-wise, it’s probably not as necessary as, say, the Vancouver game. We’ll work on some things, look at the film, and move on to Vancouver.”

Real Salt Lake travels to Portland to face the Vancouver Whitecaps on Saturday. Kickoff is scheduled for 8 p.m. MT.