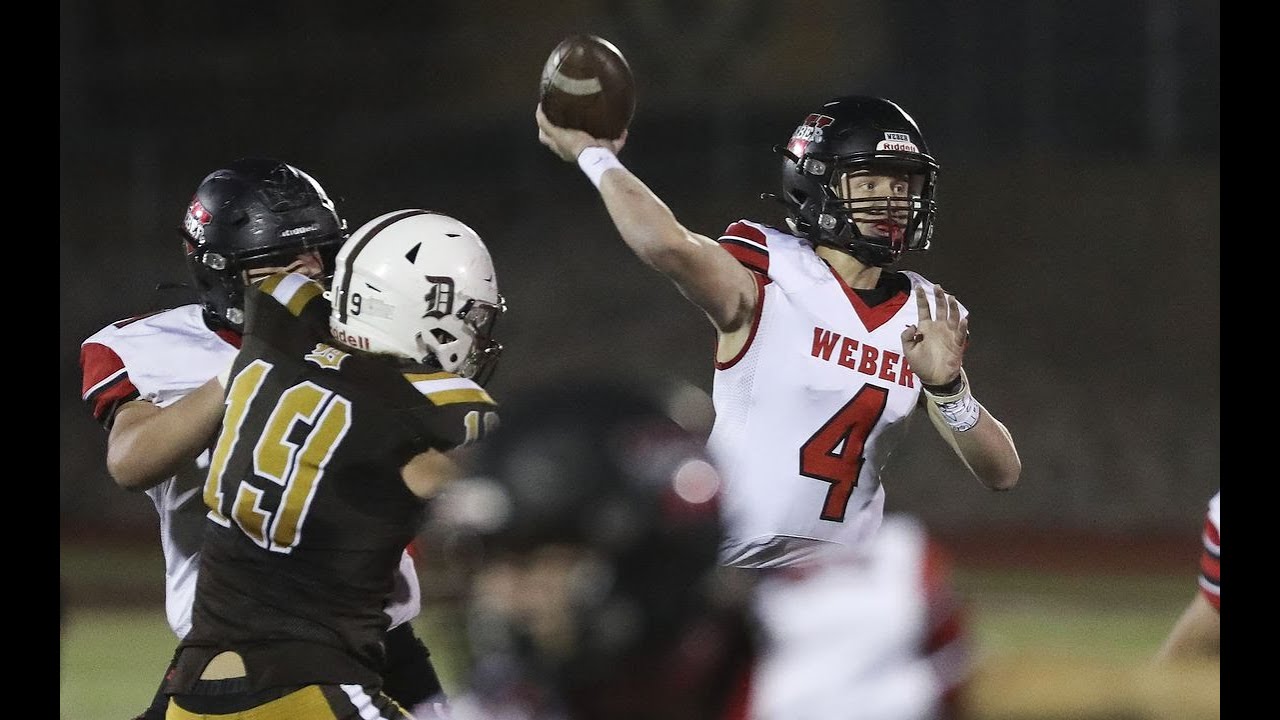 SALT LAKE CITY — Skyridge was a week away from setting up an unbeaten showdown with Corner Canyon.

But Lone Peak had other ideas.

Just as Skyridge was ascending into Utah high school football's top echelon, the Knights’ win over the Falcons shook up the top four spots in the state in the KSL.com Top 20+1, in addition to moving three Region 4 teams into a tie for second with identical 7-1 records.

It was just one unexpected result last Friday, but not the biggest, after Riverton overturned 17 years of futility to beat Bingham for the first time since 2003 in a Region 3 stunner.

The undefeated Chargers still lead the state, but there was plenty of shifting underneath them as games move to Thursday and Friday ahead of fall break.

As the Chargers rolled to 8-0 with a 56-17 win over Westlake, it’s time to consider Jaxson Dart as an all-time quarterback, as he has thrown for 8,774 yards and 88 touchdowns in his career while still in his senior season at Corner Canyon.

The Knights held Skyridge to a season-low scoring output in a 37-20 win to set up a rivalry showdown Thursday at American Fork.

The Falcons host Corner Canyon on Thursday before finishing the season against Westlake.

Maddux Madsen threw for two touchdowns as the Cavemen used a defensive effort — including Fisher Ingersoll’s 30-yard pick-6 — to put away Pleasant Grove, 41-20, and widen the divide between the region (and state’s) top four teams.

Parker Kingston threw for three touchdowns in the Royals’ 41-14 win over Clearfield, which will be Roy’s final game before being put on quarantine for at least a week — and postponing the Region 1 title game against Weber.

The Bengals cruised to a 44-3 blowout over Jordan, and have most consistently looked like the top team in 5A.

The Cougars were off last week to set up a Region 2 potential title-clincher Friday against West.

Vikings can pick up their first region win of the year Thursday against Westlake.

Eagles have looked good in flashes, but as with many schools, COVID-19 and quarantines have made consistency an issue.

The Tigers had their fourth straight off week when Timpview was forced to postpone last Friday’s game due to COVID-19 concerns, sending the coaching staff to Twitter to pick up a now-canceled game against Mountain Ridge.

“All day trying to find a game with only rejection,” Orem interim coach Gabe Sewell tweeted. “At least six in-state teams are open. We can play and call it a scrimmage, if you think playing us will hurt your RPI. Just trying to find playing time after a two-week bye.”

The Bobcats are the only undefeated team in 4A after cruising to a 42-11 win over Logan.

The Wasps had a week off before what may be considered a region title game against Salem Hills.

Jarret Elmer threw for three touchdowns and ran for another as the Skyhawks held off Provo, 26-21 to bounce back into the Region 8 title discussion — and set up a showdown with Wasatch on Thursday night.

The Darts’ 32-26 loss to Weber likely knocks them out of Region 1 title contention. Can they regroup for the playoffs?

The Miners coughed up six turnovers in a 20-17 loss to Riverton, their first loss to the Silverwolves in 17 years.

After canceling their showdown with Orem, the Thunderbirds aren’t likely to play again until Oct. 10 against Alta.

Creyton Hollingshead scored three touchdowns, Treyson Hunter added two scores, and the Beavers rolled to a 56-7 win over fellow unbeaten Kanab. Beaver can clinch at least a share of the 2A South title with a win over Millard.

A makeup game against Roy would do a lot for the Warriors as they look toward the postseason, with a win over Davis and puzzling loss to 1-5 Layton.

The Golden Eagles need a win over Provo and Wasatch’s loss to Salem Hills to have a shot at Region 8 title in the season finale next Wednesday.

The Panthers ended the game on an 8-0 run, including a safety and Enoch Takau’s 1-yard touchdown run, to hand Snow Canyon its first loss of the year and improve to 5-0 in Region 9 play with 4-1 Dixie and 1-4 Hurricane remaining.

Most of the Silverwolves hadn’t been born yet the last time Riverton beat Bingham in 2003, but Riverton jumped out to a 10-0 lead before holding off the Miners for a rare win.

Colby Barton threw a pair of touchdown passes, including a 29-yard strike to Jaxon Bennett with 8L03 left in the third quarter to take a 20-14 lead and hold on — with help from six forced turnovers.

“It’s not like we’ve arrived or anything like that,” Riverton coach Jody Morgan told the Deseret News. “It’s just one game, but considering the program is — it’s just a big win and I couldn’t be happier for the kids who got it done.”

The Silverwolves host East on Friday before finishing the season next Wednesday at Herriman.