SALT LAKE CITY — Utah’s newly hired solicitor general has admitted she made a mistake in a Florida court case she previously worked on in which a federal judge had threatened her with sanctions.

Melissa Holyoak’s objection to the settlement of a class-action lawsuit against National Tire and Battery drew the ire of U.S. Magistrate Judge William Matthewman, who expressed concern that she intentionally tried to mislead him and the parties in the case.

But in court documents filed earlier this month, the judge lauded her “detailed, intelligent, and apologetic” response and decided he would not impose sanctions on Holyoak. He found her “quite embarrassed and chagrined” about her error.

“Ms. Holyoak appears to have been overzealous, and perhaps hastily and improvidently filed her objection without carefully reviewing the settlement agreement,” Matthewman wrote. “However, the court finds that Ms. Holyoak did not engage in bad faith conduct and did not knowingly or intentionally make a false statement or misrepresentation to this court.”

Holyoak agreed to pay $3,750 to the plaintiff’s attorneys for the time they spent responding to her mistake.

“I am grateful that the court found my objection was brought in good faith and recognized the good work the Center for Class Action Fairness does in objecting to unfair class action settlements. I am happy to now turn all of my focus on representing the state of Utah,” she said in a statement.

The lawsuit claims that National Tire and Battery failed to provide a federally required paper registration form with each tire sold. The form includes the tire dealer’s contact information and identification number on each tire in the event of a safety recall. The settlement provided $650,000 to attorneys but no compensation to the plaintiffs.

Before joining the Utah Attorney General’s Office, Holyoak worked for the Center for Class Action Fairness, which is now part of the Lincoln Hamilton Institute, which she co-founded in 2019. It describes itself as a nonprofit public interest law firm that challenges administrative and regulatory actions and abuses of the class action and civil justice system that exceed constitutional limits. 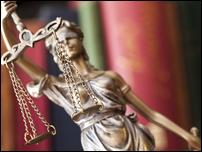 Utah’s newly hired solicitor general faces sanctions in a federal court case she previously worked on in which a judge says she made false statements and representations.

In an order requiring Holyoak to show why she shouldn’t be sanctioned, Matthewman wrote that he was “especially troubled” that her objection was based on a false premise and that she reiterated it “countless” times.

“It would have been obvious to Ms. Holyoak — indeed, to a first-year law student — that her strenuous objections were inapplicable had she simply taken the time to actually read the settlement,” he wrote.

In his order absolving Holyoak, Matthewman noted that attorneys, including Holyoak, must be careful and meticulous in their representations to the courts.

Still, he did not dispute her assertion that there are bad class-action settlements that are worthy of objections and that the Center for Class Action Fairness serves a good purpose.

“However, bad faith, serial objectors do not serve a valid purpose. Therefore, it is vitally important that when objectors, such as Ms. Holyoak or her employer at the time, file their objections in any case, they do so with the utmost accuracy and thoroughness,” Matthewman wrote.

Attorney general’s office spokesman Richard Piatt said the office is pleased with and fully expected this resolution to the misunderstanding in Florida. He said the office is moving forward with confidence in Holyoak’s legal skills.