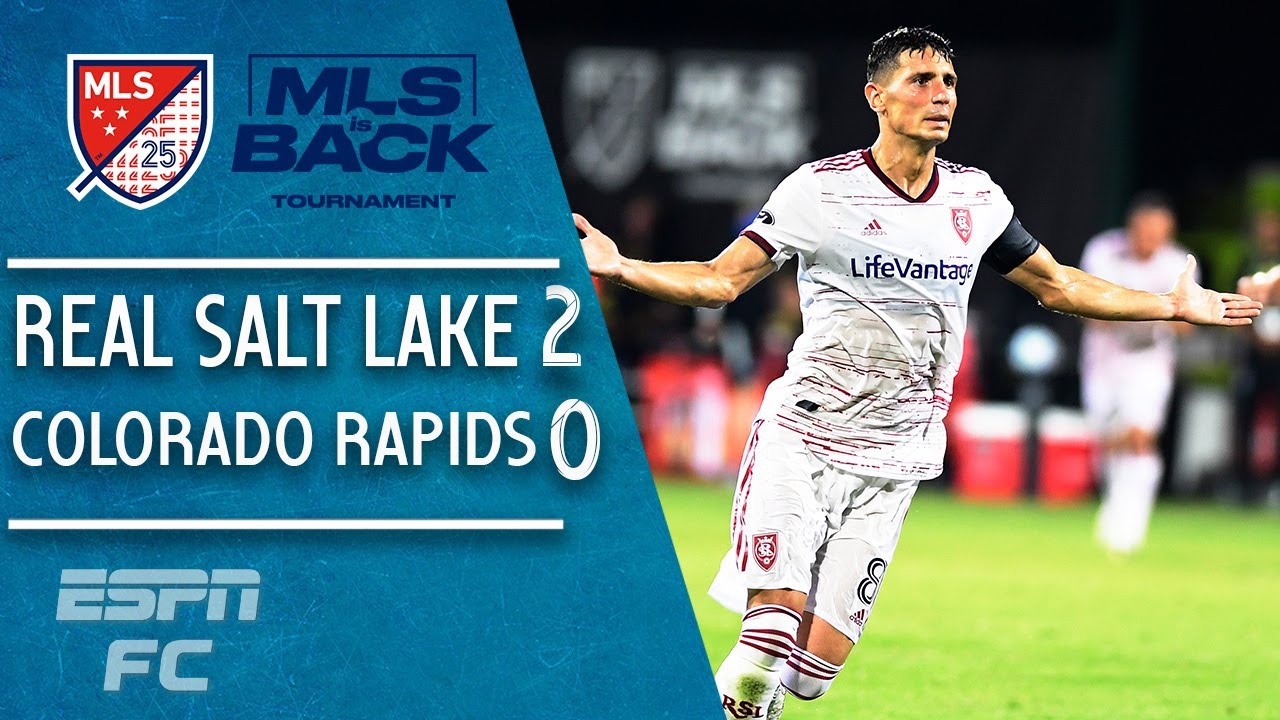 Can it get much better for Salt Lake soccer fans?

How about a win over a regional rival?

Rusnak and Damir Kreilach each scored a goal to help Real Salt Lake to its first win of the year via a 2-0 victory over Rocky Mountain rivals Colorado in both sides’ opening games of the MLS is Back Tournament near Orlando, Florida.

“We were excited to finally be back on the field,” Rusnak said after the match. “As I said before, we have a specific style that we want to play; we have an identity, and I think today we showed what that was.

“I’m very happy that we ended up with the win, and the clean sheet is a bonus.”

Zac MacMath made four saves to claim the shutout for Real Salt Lake (1-0-2).

Rusnak capitalized on a bevy of early attacking pressure from RSL, putting home the club’s fifth shot of the first half hour with a follow-up banger in the 27th minute.

The goal followed a missed shot by Douglas Martinez Jr., and Rusnak wasted no time putting back a one-touch rebound past Colorado goalkeeper Clint Irwin for the 1-0 edge just before the first hydration break in hot, humid and muggy Central Florida.

Albert Rusnak follows up to put @realsaltlake in front! #RSLvCOLpic.twitter.com/lzxJlgiXNo

The goal was the capper of a fast start for Salt Lake, which out-shot the Rapids 5-3 in the first half and held their fellow Rocky Mountain challengers without a shot on goal for the first hour.

“We were excited to finally be back on the field,” Rusnak said. “As I said before, we have a specific style that we want to play; we have an identity, and I think today we showed what that was.

“I’m very happy that we ended up with the win, and the clean sheet is a bonus.”

Rusnak nearly doubled the advantage from the penalty spot in the 72nd minute. But Irwin stepped up to deny Rusnak — and the rebound from Nick Besler — to keep the match at just 1-0.

But Damir Kreilach doubled the advantage just five minutes later, notching his second goal of the season off an assist from Corey Baird to put RSL up, 2-0.

Kreilach ripped a worm-burner from 25 yards out — while Rapids coach and former RSL assistant Robin Fraser was conducting a mid-match interview with ESPN — that gave Salt Lake all it needed to claim three points in its first match since March 7 due to the coronavirus pandemic.

“To not play a league game for a few months, and to play the way we did, it’s all credit to the team,” Kreilach said. “Our body language was great, and we dominated the first half, and then won the game. Even in the second half, we were a little bit deep. We didn’t give Colorado anything, so well done to everyone.”

Were it not for the second goal, Sunday’s result was headed toward a grinding result, possible a 1-0 win that the club would’ve still taken in a tournament opener.

“This team has figured out how to grind out results, and be mentally really strong,” RSL coach Freddy Juarez said. “Good save from the goalie, and also makes a save on Besler. It doesn’t usually go that way. But I think our guys have a very big mental strength, and that showed there. It didn’t frazzle us, and we created a great opportunity with a great goal from outside the box.

“It came at a great moment, but I felt like the team had the confidence.”

It wasn’t all Salt Lake, either. Colorado struck eight of its 11 shots after halftime to push the pressure, including Kellyn Acosta’s well-taken strike that MacMath at the beginning of stoppage time to earn the shutout.

“Last year, we showed we are a team that is so difficult to break down,” Rusnak said. “Today we showed as well that we are very good defensively.

“We are going to build up and continue our path.”

At Orlando, Kevin Molino scored the match-winner in the final minute of stoppage time as Minnesota rallied by 10-man Sporting Kansas City, 2-1 in the earlier match in Group D play.

Khiry Shelton gave Sporting a 1-0 halftime lead with a goal just two minutes before the break. The Loons thought they had equalized in the second half, but video-assistant review overturned the call.

The lead lasted until the second minute of stoppage time, when Jan Gregu whipped in a free kick off a Sporting defender to pull level. That set up Molino’s last-second match-winner, which came after Kansas City goalkeeper Tim Melia’s red card reduced Sporting to 10 men.

“We’ve got five days, and Minnesota is a good team. A well-coached team. It feels like everybody in this group works extremely hard," Juarez said. "But we’ll let the guys enjoy tonight; I love what they did. We’ve worked for four months, and we already have a scouting report on Minnesota. I’m sure they had one on us three months ago."