Economic impact of Hill Air Force Base valued at $3.7 billion

HILL AIR FORCE BASE — Utah’s military installations and properties have a significant impact on local communities, but none greater than Hill Air Force Base, a new report shows.

The Beehive State’s biggest military installation and largest single-site employer is responsible for generating $3.7 billion in annual economic impact, according to the 2019 Economic Impact Statement. The report found the main base operates using 27,650 total personnel, including 5,705 military, 5,292 military dependents and 16,653 civilians, with an annual federal payroll of $1.43 billion and yearly expenditures of $811 million.

The report also stated the base is responsible for creating approximately $1.47 billion in jobs. The Economic Impact Statement provides information about the overall impact the base has on surrounding communities using figures calculated from identifiable off-base local area spending from gross expenditures, the report stated.

Last year, the base spent more than $810 million for construction, services, procurement of materials, equipment and supplies.

“This is off-base spending by on-base units, organizations and activities,” explained Hill Air Force Base public affairs director Thomas Mullican. “Each Air Force base puts money into the economy of its host community by spending on locally purchased materials, supplies, equipment and contracts. The base also spends locally for services and construction contracts, as well as utilities and countless other items, large and small.”

In addition to spending by official Air Force units, recreational and other supporting organizations also make off-base purchases, as do on-base vendors, banks and many other unofficial on-base activities, he added.

The major on-base projects in 2019 included repairs to some buildings, roads and streets, as well as the main runway. Data from the report estimated the base helped produce more than 30,000 indirect jobs that earned an average of $48,778 in annual salary.

“Known as secondary effects, this reflects how money spent by base organizations and individuals ripple through the local economy, increasing the income of local businesses, which in turn allow them to hire new employees and do more spending of their own at their suppliers and other businesses,” Mullican said. “We measure this additional economic impact by estimating the number of indirect jobs created as a result of local base spending, and multiplying that by the estimated average salary in the local area.” 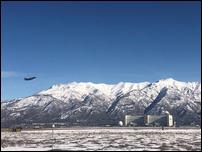 Davis County residents, especially those closest to Hill Air Force Base, got a whole new look at the might and muscle of the U.S. Air Force, as row after row of F-35A fighter jets lined up in formation and took off.

The report included an economic impact analysis, which approximates the amount of dollars that go into the local economy.

“By its very presence in local communities, both in the continental U.S. and around the world, each Air Force base puts money into the economy of its host community by spending on locally purchased goods and services,” he said. “In addition, individuals who work on base spend their own money in the local community on things like rent, food and entertainment.”

Located in Davis and Weber counties, Hill Air Force Base is home to the 75th Air Base Wing, which manages 1 million acres and more than 1,700 facilities valued at $4 billion, according the the base website. The installation houses the Air Force active duty 388th and Reserve 419th fighter wings and also supports the Ogden Air Logistics Complex, Air Force Life Cycle Management Center and Air Force Nuclear Weapons Center.

The base is also responsible for the operation of the Utah Test and Training Range located in Utah’s west desert — the largest section of overland contiguous special-use airspace in the continental United States.

At Hill, the 388th and 419th fighter wings are the U.S. Air Force’s only combat-capable F-35A fighter jets — the nation’s most advanced multirole stealth aircraft.

The 388th is composed of three personnel units — the 4th, 34th and 421st fighter squadrons — each assigned 24 primary F-35 aircraft with six backup jets. In addition, the 419th’s 466th Fighter Squadron also supports routine F-35 operations along with the active duty squadrons, according to the website.