In this call, a father tells a 911 dispatcher that his daughter had just texted him from inside Lone Peak High School saying there was an active shooter in the school.

But a spokesman for Lone Peak police on Tuesday said that call did not affect how officers responded on Friday. In fact, Lone Peak police weren’t even aware of the second call because they were already at the school.

On Tuesday, more information about the incident that prompted a SWAT team response and a lockdown at Lone Peak High was released.

The incident started Friday when a woman contacted the Lone Peak Police Department directly. That woman had received a text from her sister stating she thought she saw a man with a gun at the school, according to police.

The girl attends Highland High School in Salt Lake City. But her older sister thought Highland High was in the city of Highland, and contacted Lone Peak police.

The information received by Lone Peak police was forwarded to Central Utah 911 at 11:57 a.m. Dispatchers then forward the information to Salt Lake City dispatchers.

But Lone Peak officers responded to Lone Peak High School anyway, even though they weren’t dispatched. On Monday, the police department released a statement saying their response was due to a “communication error.” The original call was “overheard by police personnel in the building and the ‘assumption’ was it was Lone Peak High School.”

On Tuesday, a second 911 call that was received directly by Central Utah dispatchers was released.

In a recording of the call, a father tells a dispatcher that he just received a text from his daughter inside Lone Peak High. That call was received by dispatchers at 12:09 p.m. 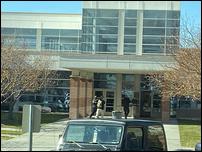 A report of a person with a weapon at Lone Peak High School on Friday afternoon was determined not to be credible and all students are safe, officials say.

“My daughter just sent me a text and said there’s a shooter in the high school. She said some kids came running to her classroom saying someone had a gun and was shooting,” the father told the dispatcher.

“I hope this is a kid playing a joke, I don’t know. But I thought I should call you immediately,” he said.

As the father continues to talk to the dispatcher while his son texts his daughter, he begins to question what is happening.

“I hope this is nothing,” he said.

At another point, the daughter sends texts messages saying her teacher told the students not to call or reveal to anyone their location inside the school in case the alleged gunman was monitoring that information.

“That’s really silly,” the father tells the dispatcher. “I wonder if this is a kid playing with her phone?”

The dispatcher eventually tells the father that police are on scene and they’ll call him if there is anything to report.

Lone Peak police said Tuesday that the school was already on lockdown and more units were responding by the time that call was made, and that the girl may have just been telling her dad what she thought was going on or what she was being told.