8 famous Utah gravesites and where to find them

From forgotten inventors to Hollywood star with four legs, Utah is the final resting place for some interesting characters. Here are eight of the state’s graves that are especially creepy, perplexing or inspiring.

Whether you love the moribund peace of cemeteries or just want to give your kids a real place to experience history, a visit to these sites provides an opportunity to appreciate the accomplishments of historical figures that time hasn’t quite erased.

Founder of Salt Lake City, governor of the Utah Territory and president of The Church of Jesus Christ of Latter-day Saints for 30 years, Brigham Young forged a memorable life. He was the second prophet of the Church after Joseph Smith’s assassination in Illinois. Young led the Latter-day Saint pioneers across the wilderness to Ensign Point, where he famously proclaimed Salt Lake Valley to be “the place.”

Responsible for beginning the settlement of the Salt Lake Valley and the founder of the University of Utah, his legacy is etched upon many monuments across the state. However, not many people know that his burial is at the Mormon Pioneer Memorial Monument, just across the street from the Beehive House. You can pay your respects to this historical giant and his family by stopping by this peaceful little park.

Lilly Gray: the woman whose grave launched a hundred conspiracy theories and continues to draw visitors fascinated by the macabre. Nestled in the Salt Lake City Cemetery at plot X_1_169_4E, her gravestone is unimposing red granite with a flower motif. But it’s the inscription that has made this woman’s final resting place a morbid draw. It reads:

Though many details of her life have been lost to history, there are some answers to burning questions. Lilly was born a twin in Manvers, Ontario, Canada, according to Dead History.

The man responsible for the creepy epitaph was Elmer Gray, Lilly’s third husband. They married in 1952, a few years after Lilly moved from the midwest to Salt Lake City. Elmer had a long history of trouble with the law and had been in and out of state penitentiaries. He married Lilly, and based on the lack of records and arrests, they lived a quiet life. According to the Utah Divisions of Archives (UDA), her death certificate says she died of pulmonary embolism and kidney failure.

As of current records and stories, nobody knows why her epitaph is a creepy sentiment. The UDA notes that Lilly's obituary is strictly facts, mentioning nothing about her life or story. Even though there's not much to explain Lilly's grave, locals still make their way in droves to see the site for themselves.

Orrin Porter Rockwell was the famous long-haired bodyguard of Joseph Smith and Brigham Young. He was a member at the beginning of the Church’s history and followed his faith into the wild western territory, long before Utah was the bustling city it eventually became.

Rockwell knew Joseph Smith in his youth and did odd jobs to help pay for the publication of the Book of Mormon in upstate New York. Easily recognizable by his long hair, Rockwell never cut it after receiving a blessing from Joseph Smith, who prophesied that like Samson of the Old Testament, his uncut hair would give him protection. Smith said, “...no bullet or blade can harm thee,” according to Find a Grave.

He was baptized at age 16 in 1830, and when he finally died, Rockwell had been a member of The Church of Jesus Christ longer than anyone living.

Before the Latter-day Saint pioneers came to Utah, members of Native American tribes farmed and hunted in the open Utah landscape. As settlers began taking over land out west, Native Americans were displaced and attacked by newcomers. Black Hawk, or Antongeur as he was known to his people, was a Native American resistance leader who fought the Utah Militia.

“As he watched his people go hungry as the game disappeared and agonized over the suffering they endured at the hands of more and more white people, he became a feared and cunning foe, raiding cattle and stealing food to help feed Indians in five states in two years of skirmishes and bloodshed,” according to a Deseret News article.

Several miners found Black Hawk's remains in 1911, and after decades of resting in the BYU Museum of Peoples and Culture, the Forest Service took his bones and buried them on Black Hawk's own land. You can visit his gravesite in Utah County.

Martha Hughes Cannon was the first woman to become a medical doctor in Utah. Het story started by trekking across the plains of the United States in a covered wagon. When she finally made it to Utah, she was called by The Church of Jesus Christ leaders to go to medical school and get an education. She later opened her own practice in Salt Lake City says KUED.

She eventually became a champion for women's rights, specifically voting rights. Cannon was the first female senator "24 years before a woman's right to vote was ensured by the United States government," remarks KUED.

Her legacy in Utah is not forgotten, and those wishing to pay their respects to this pioneering woman can find her grave in the Salt Lake City Cemetery. 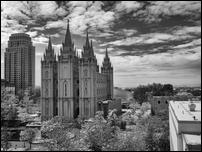 Millions of people visit Utah from all over the world. While there are still hundreds of things to see and do in Utah, these six attractions now only exist in history.

Perhaps one of the greatest inventions of the 1900s, the television changed the world. And Utahn Philo T. Farnsworth is responsible for that invention. Though he had lifelong struggles with patents for his all-electronic TV, he is credited as one of the "fathers of television," according to the Massachusetts Institute of Technology.

After inventing the TV, he pursued his invention work and went on to create hundreds of technological advancements. He moved back to BYU to study nuclear fusion and died in Utah in 1971. He was laid to rest in the Provo City Cemetery.

One of the pioneers of modern education in Utah, Maud May Babcock is beloved for her legacy. Her gravesite reads, “Teacher of Youth, Benefactor of Mankind.”

According to the University of Utah, she was the first woman given full professorship at the university. She produced and directed more than 300 plays and is credited with directing the first university-produced play in the United States.

Outside of the university, she spent a great deal of time in the community. She served on the board of the Utah School for the Deaf and Blind for 20 years, and 12 of those as its president. She was also the first woman chaplain of the Utah Senate, according to a Deseret News article.

Babcock died at the old age of 88 after battling a long illness, says the Orbis Cascade Alliance.

While not a politician or pioneer, this famous gravesite is home to the remains of Bart the Bear. He was a 1,500-pound, 9.5-foot tall grizzly bear that made a splash in Hollywood.

Bart was born in a zoo in 1977 but was soon acquired by professional animal trainers Doug and Lynne Seus, according to Bart’s website. They made him an integral part of their family.

From film to theater to the 1998 Academy Awards stage, Bart was often in the limelight. His handlers say he loved the spotlight and applause more than salmon and berries, something a typical bear would kill for. You can see Bart in many films, including "The Great Outdoors," "White Fang" and Legends of the Fall."

He retired from the silver screen and eventually passed away in his home state of Utah, notes his website. You can travel to the northeastern part of the state to see Bart's gravesite.

One place to find the graves of many fascinating historical and religious figures in close proximity is at the Salt Lake City Cemetery. Check out this guide for some of the more prominent.